MAS Did An Amazing Campaign That No One Expected! 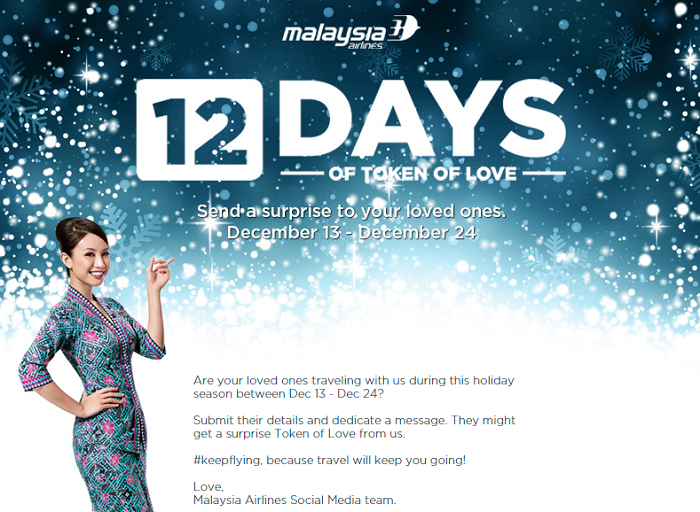 MAS Airlines recently launched a creative “12 Days of Token of Love” campaign for 2014’s Christmas season. This campaign revealed very little about what is happening, having only a simple Facebook page with the tag “Send a surprise to your loved ones, December 13 – December 24”.

The promotional picture asked users if any of their loved ones are travelling with MAS between the dates noted and requested for their details along with a dedicated message to the passenger in question. “They might get a surprise Token of Love from us,” it shared. The campaign was only available for passengers passing through or landing in Kuala Lumpur International Airport (KUL), Malaysia.

This ingenious campaign revealed what had occurred with a video on January 3, 2015. A preview was released four days into the gift-giving, however, on December 16, 2014. This behind-the-scene video showed that surprising the passengers was harder than originally anticipated, with the gift-givers (MAS Employees) running around and trying to find the person in the list to give the tokens to.

This is the product of their labour:

We talked to the Director of “12 Days of Token of Love” and also Head of Social Media and Innovations of Malaysia Airlines, Mohd. Hisham Saleh regarding the campaign. When asked about the name of the campaign, he revealed, “It’s actually called that because we gave out gifts 12 days before Christmas! 513 boxes with personalized messages were given out within the 12 days.”

1,090 boxes were also distributed to all passengers on certain special flights whereby they receive the gift boxes but without a special message attached. That brings the total number of gifts to be 1,603!

“We received more than 5,000 requests all over the world,” Mohd. Hisham revealed, adding that this list was shortlisted by going through each of the dedicated messages. “We walked at least 10km in the terminal everyday from 6 in the morning to 1am the next day,” he said, adding that the team spent about 2 hours a day to prepare the boxes for the following day. Finding the right people to give the gifts to were understandably difficult, given how huge KLIA is and how flights are prone to last minute gate changes.

Once the lucky people were found though, it was well worth the effort. They read the messages from their loved ones and each accepted a gift box from the MAS employees. One wife even managed to surprise her husband, who was on the same flight as her.

The genuine look of surprise and joy on the passengers faces alone made this campaign worthwhile.

One particularly bold man accompanied the gift token from MAS with gifts of his own. His message read, “Emily, I am so grateful to know you in my life, I enjoy and appreciate every moment with you. Today will be the day we never forget because…”

The proposal is bound to be an unforgettable one for the couple as well as the MAS passengers present. Another couple celebrated their 5th year anniversary and shared that they are currently on the way to their honeymoon.

What Were In The Boxes?

“The gifts differed depending on the receiver. For example, if the message is sent to a father, we will put cufflinks, notepads and pens in the box whereas if it’s for children, we will include a teddy bear,” Hisham explained.

All the boxes had one common item though: the MAS paperweight that was held by Yuna in the Terbang music video, a collaboration between MAS and the Malaysian singer herself.

Mixed Reception To The Video

The video has been received well by most of Malaysia Airlines’ fans from Facebook, Twitter and YouTube, with even a personal ‘Thank you’. Annuar Fakri commented on the link, thanking MAS for safely flying his wife and baby home as well as for the gift they presented to his baby.

There are, of course, those hijacking the video to question MAS’ priorities, with comments berating MAS on how the airline should be making more effort to improve their services rather than making films.

To this, we gave Hisham the opportunity to respond to these statements.

“I think this initiative was focused on what our social media fans want, and [MAS’ services] is a separate issue all together. Improvement takes time. Our focus on social media is to build the relationship so we know what’s our weakness and reach out to our fans.”

Hisham wisely puts a positive note to all the negativity thrown at MAS, “Our fans are very critical because they love the brand, they want the brand to be perfect.”

“For 12 days, we asked our internal staff to volunteer for this. These staff normally don’t have face-to-face interactions with our passengers, so this is a chance for them to do so. This is exposure for them.”

And it wasn’t an easy feat at all, as you can see from this behind-the-scenes video:

Travelling Is A Global Love

Mohd. Hisham would like to share that Malaysia Airlines is thankful for all the submission they received for the 12 Days of Token of Love campaign, adding that it goes to show much much love there is for travelling.

Regardless of how others react, we are sure that the passengers who were gifted the “token of love” from MAS have had a memorable Christmas season.

Also Read
Terbang is One Video That Will Make You See M’sia and MAS In An Entirely New Perspective
Categories: Malaysian, Lifestyle, Entertainment, Traveller