7 Proposals In Singapore To Definitely Say YES To! 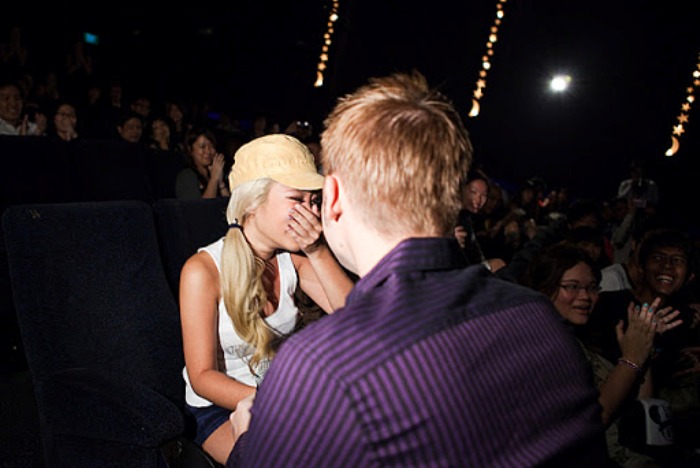 It has been over a week since the clip of an epic local proposal held at the Changi Airport was uploaded onto YouTube, and it is still going viral. To date, the video has garnered a whopping 497 000 hits (and counting), and this time, the star of the proposal isn’t the lady.

The lead here, in Singapore’s very own fairy tale ending, is a male; he represents the revival of an endangered breed of local men with the exquisite skill for crafting an exceptional proposal. Am I grateful this man chose to unleash his ammunition during my generation!

Gone will be the days of insincere HDB-instigated unions. We have before us a new league of suitors paving the way for happier brides-to-be and possibly the highest birth rate Singapore has ever seen!

And in order for the effort of this knight in shining armour to be truly resounding, I have taken it upon myself to collate Singapore’s crème de la crème in getting down on one knee, in hope that our men will be inspired, and perhaps even pick up a trick or two to create that magic proposal.

In no running order of effectiveness, here are some proposals in Singapore that have melt our hearts.

Kudos to this dude for hopping all around Singapore with mushy ‘first’ messages scribbled on white board. I think even bigger props go to the cameraman who had to take a nauseating journey down a memory lane that isn’t even his.

2. Catch her by surprise at your surprise.

The ‘surprise’ element is present in all the videos, and should be in all proposals. It is THE fundamental element.

This definitely makes for a good flashback when you are old, grey and terming your husband as ‘that old man’. Somehow, 3rd party validation of a couple’s love always works wonders in bringing back the good memories.

4. If your girlfriend is someone famous, you got to Go BIG, Go HD Quality.

Probably will be the best movie you’ve ever watched.

6. Not all Government property is off-limits.

Next time you take the train, don’t be fooled by the humdrum white-collar worker sitting next to you. For come your next turn of the head, he might just have disappeared from your line of vision, now down on the floor, putting his best knee forward.

It’s a big risk, but the returns will be high.

And here’s a bonus ‘post-proposal’ for getting through those 7 mushy depictions of love.

And there you have it. 7 hair-raising, cheesy yet strangely romantic Singaporean proposals. Take heart girls, have hope in men!