Kickstarter Pick Of The Week: MAGNETIC, Revolutionary Paper That Sticks To Any Wall 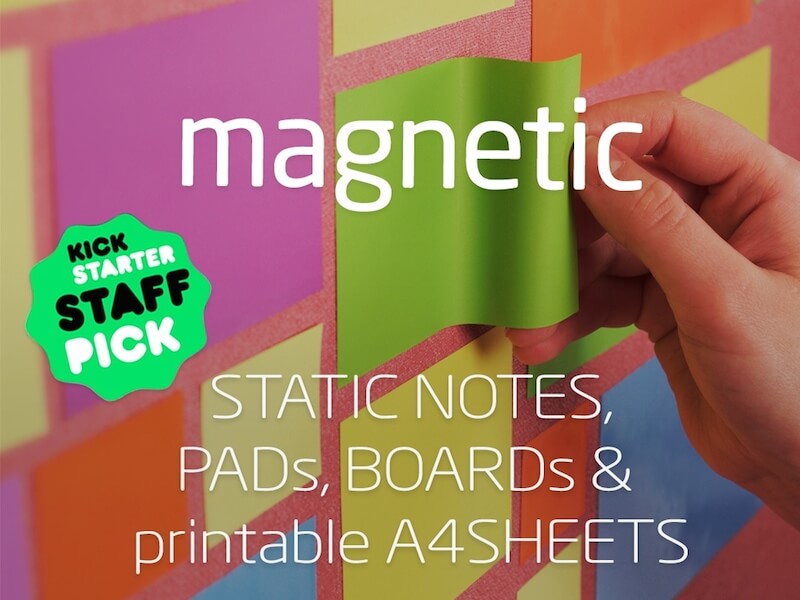 Here’s something you probably didn’t know about Post-it notes: they’re harmful to the environment.

Four years ago, Edward Tenner wrote an article titled ‘The Dark Side of Sticky Notes’ on The Atlantic. In his report, he describes the “hidden glitches” and destructive impact it has on books. The State of California’s recycling office also concluded that, from a recycling point of view, it’s best to avoid the use of Post-it notes.

But in a world where Post-it notes are one of the most convenient ways with which to take a memo, what can we do to save our environment? That’s where this new Kickstarter project comes in. MAGNETIC is a reinvention of traditional paper; a statically charged invention that slaps on to any surface without the need for pins, glue, or thumb tacks.

“Magnetic is not actually paper. It’s better than paper.”

This is how MAGNETIC works: the products are made to contain stable static charges, so they can stick to any dry surface. They’re also erasable, so if you use a dry-erase marker, MAGNETIC can technically be reused over and over again. This means that you will be able to save on the money spent buying new notes.

Despite it being a magnetic sheet, you can use any writing instrument to write or doodle on MAGNETIC. The Magnetic sheet — which is A4-sized — can even be used in ordinary printers, although it is slightly thicker than your average paper.

Take that, sticky notes. Tesla Amazing, the team responsible for creating MAGNETIC, shared that they impose strict quality standards and refuse to jeopardise them. This statement on Kickstarter had me bouncing off the walls: “We love the environment, so we made all Magnetic products fully recyclable.”

“We’ve been on the Moon, so why can’t we have some ideal paper, instead of using these awful stuff to stick them?”

As someone who used to be a Green Club member, it’s encouraging to know that Tesla has joined the eco-friendly bandwagon.

“We do not consider ourselves as great innovators, we just want to make our lives a little better.”

When questioned about the durability of MAGNETIC, the team explained that it depends on the size of MAGNETIC and smoothness of the surface. They found out that while the S-sized MAGNETIC notes can last for 4-5 days, the MAGNETIC boards can withstand years. For the best experience, the team recommends a dry, smooth, and dust-free surface.

Like a permanent magnet, it is also possible for MAGNETIC to lose its magnetism. The trick is to rub the sheets against your clothes to recharge them. Most importantly, you can cut MAGNETIC into pieces without it losing its charge.

Do your part to save the environment. For every $1,000 raised, Tesla Amazing will equip one African school with 10 Magnetic reusable boards, 3 maps, erasers, and markers. You can support MAGNETIC here.

Also read: Kickstarter Pick Of The Week: This Chopstick Will Give You The Perfect Eating Experience