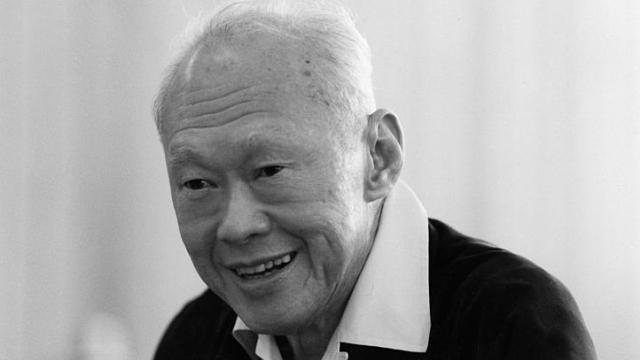 Both locally and all over the world, the outpouring of tributes to Singapore’s founding father is establishing him as a visionary who made a huge mark on the world. But it is also worth remembering this Cambridge-educated, world-renowned statesman in a different way — as a man who never quite lost touch with his simple roots.

There’s a funny anecdote told of him as a lawyer with Laycock & Ong. According to Benjamin “Mr Miyagi” Lee, his father worked in a bus company in the 1950s, and enjoyed retelling this memorable story:

“I was working in the bus company lah, as an accounts clerk, keeping the books. Then one day this man came and kicked the door open like a gangster. He walked to my table and banged the table and shouted at me: Show me your books!”

If you haven’t already guessed, that boorish man was Lee Kuan Yew, then-legal advisor to some trade and students’ unions in Singapore. The incident happened early on in what would be a lifelong career of championing trade unions and the working man.

Even Mr Lee’s legendary time in power as a politician never sanded the rough-edged side off him — the side that was a heritage of struggling tooth and nail through those troubled decades. Famously, one of his quotes on ex-Workers’ Party leader J.B. Jeyaretnam would not seem out of place in the preliminary to a gang fight:

“Everybody knows that in my bag I have a hatchet, and a very sharp one. You take me on, I take my hatchet, we meet in the cul-de-sac. That’s the way I had to survive in the past. That’s the way the communists tackled me.”

Undoubtedly, his ability to play rough with the best of them went a long way toward gaining the trust of numerous trade unions as their representative. Against an unsympathetic Colonial government and later communist-led unions, he defended the interests of local unions, winning concessions for them time and again.

It would not be amiss to call him the original unionist; his commitment to Singapore’s workers was one that harked back to the start of his political career. While his name has become practically synonymous with Tanjong Pagar GRC, you might not know of the admirable reason behind his choice:

“When I fought my first election in 1955, I chose Tanjong Pagar because that was where the postmen were based and also the dock workers.”

In their turn, the unions rallied support for him throughout Singapore’s merger with and separation from Malaysia. And when his People’s Action Party (PAP) was formed in 1954, its first leaders and members hailed from the trade union movement, kickstarting an unbroken connection with those at the grassroots level.

It took a man of his vision and wisdom to establish partnership on an equal footing between unions, employers and the government, at a time when the status quo amongst the three was typically antagonistic. While some today see the tripartite relationship between the National Trades Union Congress (NTUC), the Ministry of Manpower and the Singapore National Employers Federation (SNEF) as government-dominated, Mr Lee himself showed no hesitation in emphasizing just the opposite:

“… in the end, it must be the vigilance, diligence and hard work of the trade union leaders themselves which should sustain the movement…”

Interestingly, Mr Lee also once pointed out,”The close co-operation between the political and the union leadership made modern Singapore.” How did this partnership — one which carries on till today — arise? In 1968, a newborn nation was made even more vulnerable by the withdrawal of British troops from Singapore. The crisis faced then wasn’t just military; for hundreds of thousands of Singaporeans, it also meant unemployment. This made it essential for the fledgling government to work with NTUC and employers, changing employment laws and practices to lay the foundations of a productive, cooperative economy.

Their joint efforts paid off spectacularly: by 1970, nearly 40, 000 new jobs had been created. As Singapore’s economy picked up speed, Mr Lee supported the trade unions in their mission to upgrade the skills of workers, putting a small fishing village on par with the world’s best and brightest. And the rest of Singapore’s economic miracle, as they say, is history.

By working closely with the trade unions, Mr Lee ensured that the common men represented by them had a “share of the country”. And from his lifelong collaboration with trade unions such as NTUC, it’s undeniable that those who criticised his “ivory-tower” mindset overlooked his remarkable empathy and support for the hardships of the common man.

“The image that occurs to one as we recall what went into creating this country is not that of the nanny or the housekeeper, let alone the East Asian autocrat of caricature. A more apt image might be that of the constant gardener whose careful husbandry — of resources, talent and values — was directed persistently at fitting everything to a whole.”

The image of the gardener sums up the fact that Mr Lee was our founding father as well as a true son of the soil. Beyond the miracles he engineered and the eloquence of his speeches was an austere life of hardship, grit and perseverance. It’s fitting that his legacy of pragmatism and sacrifice will carry one final footnote:

It seems both apt and intensely moving that the great man and stalwart unionist who gave his life to build Singapore will continue to serve his community one last time. Each and every Singaporean on the street owes a vast debt to this remarkable man — one that can never be repaid except through dedicating ourselves to serving our country in turn. Rest well, Mr Lee.

Also Read
The LKY Legacy: Why It’ll Be Hard For Singaporeans To Have Closure
Categories: Singaporean, Yahoo News, Opinions, Must Read, Luminary