50 Homecooked Recipes For SG50: My Singapore Food’s Karen Nah On Preserving The Taste Of Home 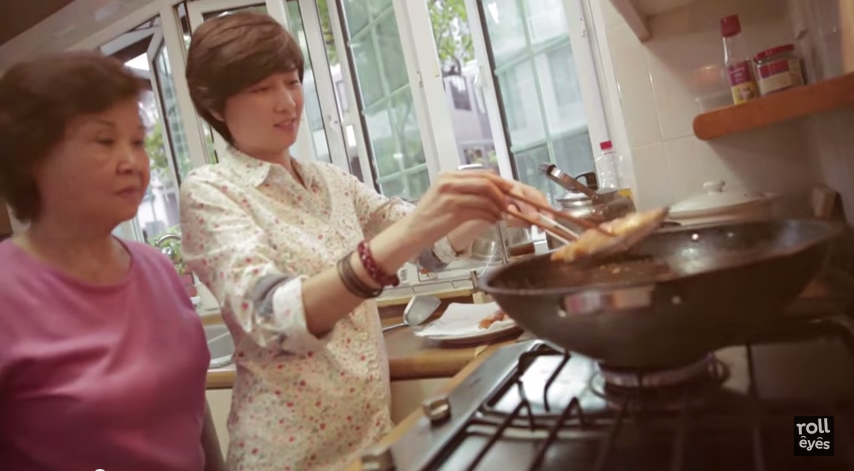 Singaporeans face a strange conundrum involving homecooked food. One in three people here eat out more than they do at home, but only about two in ten say they prefer this arrangement. The truth is that while we all complain of being too lazy, busy or unskilled to cook at home, most of us long for the evocative, distinctive taste of our old family recipes.

Karen Nah would like to help with that. Her campaign, My Singapore Food, aims to capture family recipes contributed by Singaporeans from all walks of life — fifty of them, as part of our SG50 celebrations.

Although her initiative only began last June, Karen said, “It’s always been on my mind as a constant work-in-progress since I started recording down my own mother’s recipes.”

Through a series of short films, her not-for-profit project will record fifty uniquely Singaporean recipes and post them to a customised website. Since anyone can view these cooking videos and try them out themselves, she hopes that My Singapore Food will inspire Singaporeans to cook at home more often, and pass down their own special recipes to future generations.

So what kind of recipes can we look forward to seeing? What she hopes to highlight through My Singapore Food, Karen says, is the link between our homecooking traditions and the cultures in which we have our roots.

“MSF’s recipes will focus on heritage dishes passed down through generations and all levels of our society — from celebrity chefs’ restaurant-worthy home-cooked meals, to our next-door neighbour’s secret recipe of mutton curry, to grandma’s signature chicken soup for the soul.  They’ll be reflective of our diverse cultures from different dialect groups and races.”

While Singapore is renowned for being a food paradise, this usually refers to food that is sold outside. But if you think about it, most of the signature dishes for which we’re willing to queue hours in line have their origins in old family recipes and home cooking. Karen believes that the recipes in My Singapore Food are special because “they can’t be easily replicated commercially. The heart and soul of each recipe is what makes it worthy of being a heritage dish.” These fifty recipes will offer us a very intimate representation of Singapore’s rich culture and heritage.

But I don’t know how to cook…

If you’re anything like me, you’d be pretty well-versed in a plethora of excuses to stay out of the kitchen: I can’t cook for nuts. Anyway, where on earth would I find the time or energy to cook after work? Even if I did, there’s no space in my schedule to be buying ingredients all the time. And let’s not even talk about how difficult it is to learn to cook properly.

These are all valid points to make — although there might be just a whiff of laziness behind it as well. In any case, Karen says that My Singapore Food is here to help.

“Our cooking videos are specially designed in tutorial style, so that everyone and anyone can follow the cooking methods step by step. We’ve listed the required ingredients for each recipe clearly, so with some simple preparation, even an amateur cook will be able to dish up the family’s favourite.”

You might have heard of Karen’s other food-related project, 30 Minute Cookin’. This is a project comprising cooking videos that guide you to whip up a meal in — believe it or not — thirty minutes. These are no plain dishes, either — from just a quick look through the site, I caught a glimpse of delicious-looking meals such as Butter Cereal King Crab Leg and Yuan Yang Pineapple Fried Rice.

In other words, regardless of whether it’s lack of time or talent, there’s pretty much no excuse for you not to get started on whipping up your own home favourites now.

The Taste of Home

There’s something about home-cooked food that evokes heartwarming associations, particularly with our childhood days. As Karen put it, “They’re food that we were fed with, grew up with and found comfort in.”

Because of this, she felt it “was not right” when she noticed that for the people around her, eating out was the norm. “To me, eating out is only an option for special occasions — things like socialising with friends, or celebrating birthdays. For a nation of food lovers, with so many diverse cultures and stories behind each home-cooked recipe, it’s important to retain our home cooking heritage, to preserve our cultural and national identity.”

As Karen shared some of her experiences, it became clear that despite our current trend of eating out, homecooked food continues to mean a lot to many Singaporeans. She recounted a moving incident that occurred during a filming for her project:

“We have a contributor who’s an eighty-plus-year-old Ah Ma — she shared her Teochew soon kueh recipe. When we arrived at her house in the morning, she’d already prepared one lot of soon kueh. The moment we stepped in, she served us one plate each and said that before we started work, we had to taste her soon kueh first — it was her family tradition.

We were very touched — this grand old dame woke up in the wee hours to prepare her soon kueh for us, even though we were strangers to her. In fact, her sharing of her family tradition made me nostalgic for my own. Her heartfelt gesture and enthusiasm reaffirmed our belief in this meaningful project.”

Her journey so far, she says, has been an inspirational one. “I’ve met many inspiring Singaporeans who’re very willing to share their heartwarming stories and delicious recipes. They’re as passionate as us in wanting to retain their precious recipes so that they can pass them down to future generations.”

Currently, Karen is running a Crowdtivate campaign in the hopes of crowdfunding the costs of her project.  While My Singapore Food is a non-profit initiative, she says that a lot of manpower and resources are needed to accomplish it. “We require a team of professional videographers, a website to house the fifty recipes in video format, and a full-coloured cookbook. We also need a group of people to do all the legwork, collating, editing — and there’s a whole bulk of logistics involved.”

To date, My Singapore Food has raised SGD 17, 119, more than half of its goal of SGD 30,000. If you’ve been inspired by Karen’s mission, you can support her by pledging an amount — there’re various rewards for supporters, including a customised Gula Melaka Mousse Cake for a contribution of $100 and above, and a Limited Edition My Singapore Cookbook for pledges of $150 or more.

In the run-up to our 50th National Day celebrations, things get more exciting: Karen expects to officially launch the My Singapore Food website this May.

“Recipes will be uploaded every week, so that by the end of 2015, there’ll be 50 recipes available. After that, everyone can still look forward to a wider variety of dishes through contributions following the first honourable 50.”

She also plans to produce a limited-edition MSF cookbook, which will be released in time for National Day.

We Singaporeans are notorious foodies, but if there’s one thing we can learn from Karen about appreciating food, it’s that it isn’t just about taste — it’s flavoured with the family, social and cultural ties it can encapsulate. For her, “home-cooked food preserves some of the most important memories that make up a big part of Singaporeans… You can say that my inspiration for My Singapore Food is almost everyone around me.”