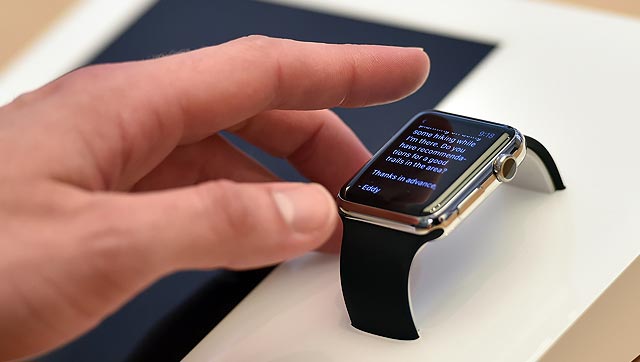 All over the world, from Japan to the United States, Apple fans are curiously flocking to Apple stores to try out the Apple watches…and unfortunately, Singapore’s been left out of the party. Our local retail stores aren’t carrying the watches for try-outs, and they won’t be arriving at our sunny island on the April 24th international launch date either.

While it won’t be quite as satisfying as feeling that 18-karat Rose Gold edition on your wrist, there’re still some innovative ways for local Apple fans to try out the smartwatches before they’re finally released here. Here’s a roundup of some of them.

ARWatch is a free iPhone app that allows you to visualize how different Apple Watch models will look on your wrist. All you need to do is print out a provided paper target, attach it to your wrist, and load up the app on your iPhone. The app quite literally bends reality in order to produce renderings of each watch.

Unfortunately, the app isn’t approved by Apple (as might be expected) and isn’t available in the App Store for iOS. A few weeks ago, Apple also pulled a dick move when it killed the certificates necessary to download the app from Safari. But not to worry, Apple fans: ARWatch is, ironically, available on the Google Play Store.

This demo site functions as an online emulator for the Apple Watch. The site provides you with the screen of the smartwatch, complete with apps which you can click on to open and demo push notifications. You can even add a logo of your choice — say, from your favourite app — to see how it will look on-screen.

Obviously, there’re limitations to this method: having to click makes the watch simulation far less responsive than the real thing, and you’re unable to test out swiping and tapping with your finger. The demo site also doesn’t have the all-important feature of seeing how the wearable looks on you, unless you try getting creative — how about opening the site on your phone and putting it against your wrist? What it can do, however, is allow you to get a pretty good approximation of the smartwatch’s size and layout.

Since the apps featured on the Pipe News demo site are rather limited, with only basic apps like Inbox and Maps, WatchAware.com is a good alternative if you want to see how the apps you use frequently will function on the Apple Watch. WatchAware, the site proclaims, is dedicated to “highlighting, explaining, previewing, and reviewing all the best indie and mainstream Apple Watch apps as they begin to surface.” You can actually play games like Clover Clover, or see how newsfeeds will look like on the tiny watch screen.

Numerics #watchapp makes it simple to track the numbers important in your life on #AppleWatch: http://t.co/8pbyj0tb9J pic.twitter.com/krMEpy1ACQ

The site is continuously updated as more and more new Apple Watch apps are announced, so it’s a great way to get a feel of how the smartwatch will work.

Ever since the Apple watches were unveiled in September last year, Apple enthusiasts have been coming up with their own DIY approaches to ease the long wait before the real things are launched. The result? PDFs created from screenshots of the Apple Watch cases, scaled to the correct sizes (38mm and 42mm) and ready for printing. If you’d like, you can also use Apple’s sizing guide to cut out your own wristband from a sheet of paper, or print out these wristband templates by iClarified.

Yes, we know what you’re thinking: it’s a rather clumsy method of seeing which watch size will fit your wrist. Since the template is only 2D, it can’t give you a real sense of the weight or bulk of the smartwatch, and the paper visuals are definitely a far cry from the real thing. But if you’re looking for a rough idea of how the watch looks around your wrist, the templates can fit the bill.