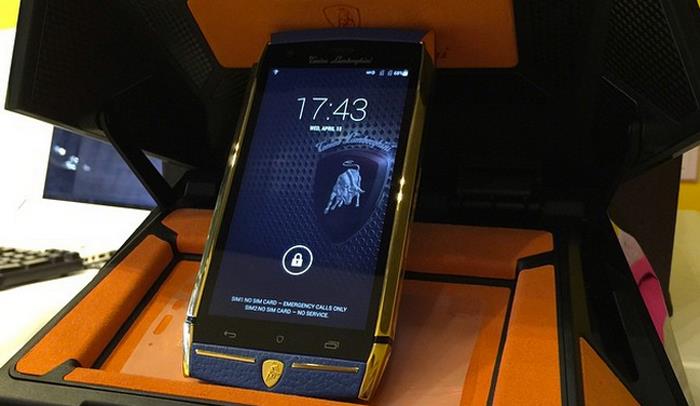 If you thought your iPhone was expensive, you should check out some luxury smartphones. Made for the rich and indulgent, luxury smartphones are things you probably only see through a shop window or on your computer screen.

But thanks to Tonino Lamborghini Mobile, I had the chance to spend a week with the 88 Tauri, a luxury phone by the well-known sports car producer that costs upward of USD6,000 (that’s SGD8,000, people).  In fact, it is one of only 1,947 units of the phone that is available — 1,947 units to commemorate the founding of Lamborghini in 1947.

The experience has been surreal, nervewrecking, and kind of awkward.

Talk about a good first impression.

The box snaps open the way you would expect a Lamborghini car door to open.

And there it is —

The moment I saw the phone, I realised that I had zero expectations about what the phone would look like in real life.

I knew, however, that there was supposed to be a moment. I’m an avid Apple lover, so I’ve had those times when I’ve unboxed a brand new iPhone and experienced that moment of awe when I held it in my hand. I’ve gone through similar unboxings with friends for non-Apple products, like the Samsung Note 4, or the HTC One M8. We all know what that moment feels like. But for this box, unfortunately, I didn’t have that moment.

What I thought when I picked the phone up went more like this: I’m holding a phone that costs more than SGD8,000. Wow. This is going to look so strange next to my $3 hawker centre lunch.

The blue patented calf-skin leather was an odd combination to the gold accents (real gold) around the edges, and I was surprised to find gold in the hinges opening up to the SD card slots and two SIM card slots located on the sides too.

The glass that holds the phone’s 5-inch 1080p HD display uses Gorilla Glass, and is custom-made to be shatterproof and scratch-proof — the same glass used in Lamborghini’s cars.

It definitely looks heavier than it feels, though it is pretty heavy compared to its other 5-inch counterparts.  Rather than sleek and stylish, the phone is boxy, clunky, and almost outlandish — which fits the criteria of a luxury smartphone well. It’s a phone to be seen, not to merge into your lifestyle seamlessly. When I took the phone out in public to take a photo or reply to an email, I felt awkward and self-conscious, like I knew people would notice. As it was made to be.

The 88 Tauri operates on Android 4.4.4 Kitkat, instead of the latest 5.0 Lollipop, and at first glance, looks like any old Android phone. The Lamborghini skin, with its dark metallic look and angular style, seems to try to look sleek, but somehow fails as it emphasises its clunky exterior.

Those icons? Not exactly sexy.

However, it does have amazing capabilities.

The battery life, for one, is amazing. Unlike most Android phones, there isn’t a way to remove the battery thanks to its leather exterior, and there’s really no need to. With a maximum battery capacity of 3400 mAh, it promises 35 hours of calls and 1000 hours on standby mode. In fact, with light usage and Internet surfing, and without regular texting, I charged the phone only once all week.

The 5-inch HD screen rivals that of similar sized phablets Samsung Note 4 and iPhone 6 Plus, but with a sick stereo speaker that makes for incredible music playing without that cheap, phone-speaker feel. The 20-megapixel camera and front-facing 8-pixel camera works astoundingly, with incredible detail.

Using it felt seamless, without any lag at all, thanks to its 2.3GHz quad-core Qualcomm Snapdragon 801 processor. It also has a 3GB RAM and 64GB of possible expandable memory, which you can’t really complain about.

The specs are impressive, though it’s not an out-of-this-world experience you would expect from an SGD8,000 phone.

From its ostentatious exterior to its expensive accessories (the earphones that come with it — the Quantum ML-01 — cost USD149), the 88 Tauri isn’t a phone to be used by the discreet. It is built to be showy, even gaudy, and to take up space in your lavish and equally showy lifestyle. It’s not one that suits mine, with my $3 lunches and my bus rides home, but hardcore believers in the luxury phone world would appreciate the effort and detail that go into this phone, from the stiching on the back to the shiny portruding Lambo logo on the front that looks like it might work as a home button but actually doesn’t.

As part of an ordinary, Singaporean lifestyle, it made me nervous taking public transport home, kind of like how holding SGD8,000 in cash in your wallet would feel.

It’s not a quality-for-a-good-price sort of phone. It’s a phone for the rich, who can afford to pay for gold-plated and calf-skinned phones with a great brand. It’s a phone for bragging, with its screen made of lambo-window glass, limited edition release, and stereo speakers.

As a smartphone, I wouldn’t recommend it. As a luxury smartphone — most definitely.