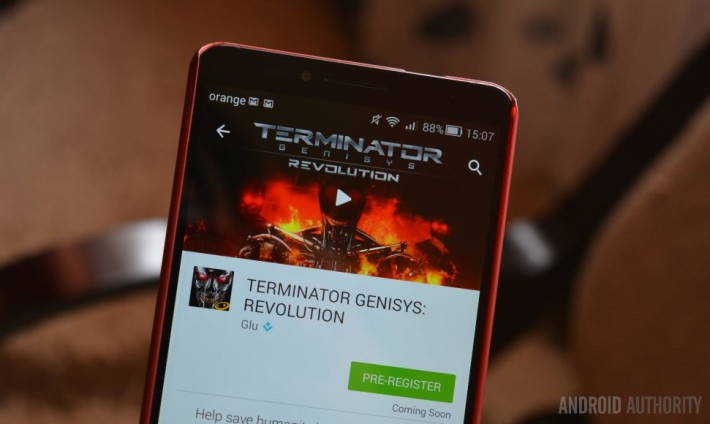 You’re browsing through the app store, and you see a game that catches your gamer instincts — only to realise it’s not available for download yet. You don’t want to let it go just like that;  you need to play this game. But what can you do but wait (and hope you don’t forget about it by the time it launches)?

Well, now you can forget about facing that problem ever again: Google Play has announced that users will be able to pre-register for selected upcoming games and apps — how cool is that?

The first app developer to get the privilege of trying out Google Play’s new feature is none other than Glu Mobile, the creator of the Kim Kardashian: Hollywood app, as well as singer Katy Perry’s soon-to-be released game. Their upcoming app, Terminator Genisys: Revolution, is similar to RoboCop, and will be based on a third-person shooter concept.

Personally, I really like RoboCop, and found myself thoroughly immersed in the game. So when I heard that another game by Glu Mobile was up for pre-launch, I had to pre-register myself. This is what you’ll see instead of the usual “INSTALL”.

The pre-register function is pretty much a no-brainer to use: after clicking on Pre-register, you’ll get a pop-up letting you know that you’ve successful pre-registered for the game. You can then choose to either share the app with your friends, or skip that step by clicking on Understood. You’ll then receive a notification once the game is available for download.

Also Read
Kim Kardashian: Hollywood Is Kardashian’s First Step Into The Mobile Game Industry – But Not Her Last

Of course, you can always unregister if you lose interest — no stress. For now, though, you can rest assured that you’ll never miss another great Android app, or that you’ll download a new game, only to find out that everyone else got theirs ages ago. According to TechCrunch, Google Play’s pre-register function is free to use for those on Android, and it is not mandatory for users to download or purchase apps that they’ve pre-registered for. In other words, there’s much to gain, and nothing to lose for those who want to make use of this feature.

As for developers, this function might be a rather handy one for them. Using the pre-register ability could potentially give them an idea of how well-received their new app will be after its official launch, giving them time to make improvements or tweaks where necessary. Pre-registration thus functions as a feedback system of sorts. It also maximises pre-release hype, and gives developers a platform with which they can engage with fans.

Will The Pre-Register Feature Take Off?

Personally, I believe that the pre-register function could be a promising one — if only more people knew about it. Unfortunately, if you didn’t specifically search for Terminator Genisys: Revolution in the Play Store, you probably wouldn’t have discovered Google Play’s new addition to its app store.

We only can wait and see if developers will adopt this new function, or if Pre-register will simply cease to exist. I, for one, am hoping for more pre-register buttons to be available on forthcoming games and apps.