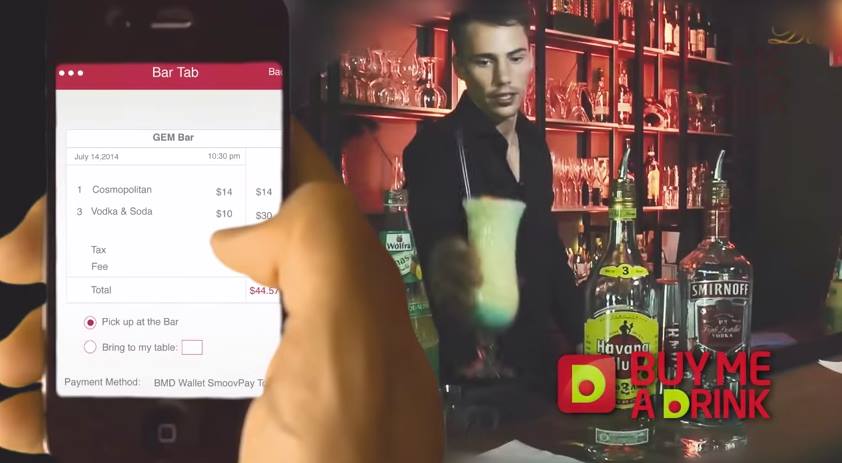 There are many things that could go wrong with a night out. You could approach a girl or guy you’re interested in and get rejected. You could end up getting into a fight with the bartender because neither of you know whether you paid for your drink or not. There could be a massive crowd at the bar, leaving you without a drink at all.

A night out could go badly in so many ways.

That’s what local startup Buy Me A Drink (BMD) aims to fix. The social nightlife app has introduced a functional digital wallet, enhancing your nightlife experience via a single app.

The concept of the mobile wallet is this: when you enter a club, bar, or party, you begin the night by checking in on the BMD app, so that other people will be able to find you. You then select from a menu of drinks that is available to you on the app, place your order, and pay for it from your in-app mobile wallet. It generates a pin for you, which you present to the bartender in order to collect your drink.

According to BMD, the app will be able to cut down waiting time by 40%. It is also a great platform through which bars and clubs can offer seasonal promotions, giving users a frequent stream of discounts. The Public House, for example, will offer 10% off all drinks all day and night, and 20% off during Happy Hour, if you use the app to buy drinks.

Buy Me A Drink’s CTO, Damir Jakobic, said: “The F&B industry faces many challenges as it is, so we set out to design a very simple, free of charge system that would help them overcome some of the unnecessary hurdles, saying goodbye to chargebacks is just one of the perks”.

To make things more interesting, girls can take the initiative in social settings to prompt the guys they like to buy them a drink with a “Buy Me A Drink” prompt. Girls (or guys) can even state their choice of poison on the app, so that anyone interested will be able to get the drink you want. If you wish, you can also send drinks via the app to the person of your choice — a subtle mobile pickup, if you will.

The social aspect of the app is a huge plus. It definitely brings a new element to a night out — one that even girls can look forward to. While many Singaporean guys would shy away from a girl forward enough to pick them up — or, god forbid, offer to buy them a drink — the Buy Me A Drink prompt provides a subtle way to flirt without scaring away potential targets.

Offering to buy someone a drink through an app may not be as impressive as actually being approached, but it does help provide a bit of buffer from that initial social anxiety. If things go sour, you won’t actually be in the company of a creep, anyway.

But though the idea is attractive, the app itself isn’t as sexy as the prospect entails. Despite the potential BMD has, it lags in user experience and style, especially for an app looking to be the go-to companion to a glamourous night out. The promotional videos for this app also seem to be very male-centric, which I feel most girls would shy away from. I doubt girls will hook up with a guy just because they succeed in guessing what drink they like.

The nightlife app isn’t exactly unchartered territory either, with locally-made apps like Frunk and Nox providing booking and reservation options and social engagement. Frunk has even introduced a social feature that allows you to privately send drinks to one another in the same bar/pub. BMD may have been around for a while, but its design isn’t keeping up with its competition.

It’s not clear if BMD’s competitors will expand to include a mobile wallet — one of the biggest game-changers BMD has — anytime soon, but an improvement in app experience and design on BMD’s part would definitely help the platform become as sexy as the experience it promises.

The new BMD app is available on the iTunes store, and the release for Android has been set for July. A series of demo days are scheduled around the city, and the public can expect free drinks just by taking the app for a spin.