“What Does It Do Exactly?”: My Week With The Apple Watch 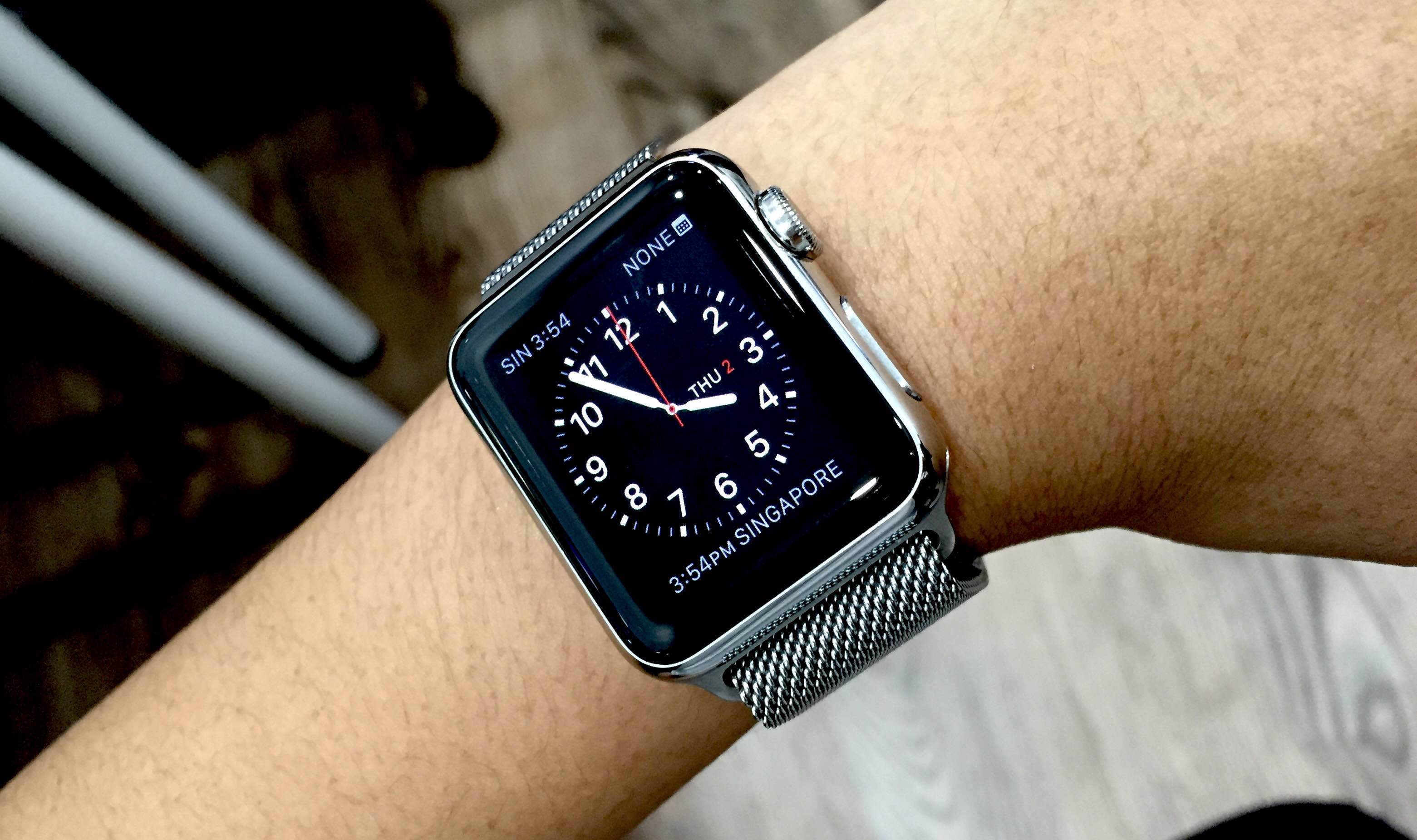 It’s a Thursday, and after setting up the Apple Watch (with some help), I set out into the world with a brand new wearable. The metal strap feels sleek on my wrist, and I can’t stop myself from fiddling with the strap and the crown. I spend all of my commute solely on the watch face — it needed to be perfect, and I must have customised the shit out of every available design.

When I get to the office, my entire team jumps on it. The first questions come — “What does it do?” “What can it do?” — and I fend them off with the classic excuse that I’m not done exploring it yet. In fact, I find it impossible to even begin explaining what it can do.

The first string of WhatsApp notifications amuses me to no end. I answer only those I want to, but the ability to not miss a text now is nice, and makes me feel important.

I spend the rest of my evening downloading apps from my Apple Watch app, and perfecting my notifications.

Starting the day with the Apple Watch is surreal. I’m very aware of the fact that I seem to be the only person on my bus twiddling with my watch, which I’m drawn to every spare second I have. I’ve finally settled on the animation Watch face — which houses my new pet jellyfish Squishy — and I tap the screen often to look at him. Seems I’m starting to use the watch as my smartphone surrogate, which isn’t that great an idea in retrospect.

Squishy is not a real pet, and I think I have a problem.

What is great is the range of news apps I’ve downloaded. With Feedly, Flipboard, and Instapaper, I feel like I’m on top of the world — the headlines world, that is. I’m done with all three in 10 minutes, and I turn to Instagram, where I begin liking almost every picture there is. I can’t see the pictures all that well, anyway.

The Watch does prompt me to meet my exercise quota for the day, which I ignore. It does hit me somewhere deep; the guilt buried deep within me that I must be some lazy bum. I wave it off by muting its notifications.

The fact that I now have problems looking for a specific app on my watch face frustrates me to no end.

It’s a Saturday, and for the first half of the day I forget to put the watch on. I laze around at home for a good time, before I go off to meet my brother. My brother’s daughter, an energetic 6-year-old, is instantly fascinated with it, insists on calling it the “App Watch”, and wants me to show her its secret tricks.

I show her many things, like all the news apps I have, Instagram, Music, the weather, even tiny-sized games I’ve downloaded just for the heck of it. I show her the activity app and its messaging features. She wants none of it. But when I turn on the camera app, which essentially works as a remote for my iPhone 6 camera, she flips out.

She begins bringing out toys and books to take pictures of, she giggles when I bring the camera close to my face, and she now has the Apple Watch strapped to her wrist and she doesn’t want to give it back. She’s also fascinated that you can point the phone camera at the watch with the app on, creating an endless chain of “App Watches” — Watchception, if you will.

She then goes on to take 80 photos and drains my phone battery. I tweet it later from my smartphone for good measure.

Got a 6yo to review the #AppleWatch. The only thing that impressed her was the camera remote. pic.twitter.com/vDgY9sboOp

Sunday’s a busy day that I spend out and about, and halfway through the day my phone battery goes flat. As if that’s not a bad enough situation, I am now stuck with two devices that I can’t use, one of which is fully charged. It’s not the right device, though.

I still poke around on the Apple Watch because I’m now pretty sure that I’m a smartphone addict. I’m not connected to anything in any sense — I couldn’t have played Mimic even if I’d wanted to — but the feeling of having a device to hold and look busy with makes me feel fulfilled. I pick up a new nervous tick in turning the crown with my finger. I change my watch face three more times on the commute home, but Squishy is eventually reinstated anyway.

Today’s the first day I use my Apple Watch to check for bus timings. SG Nextbus is great solely for the fact that I can check when my bus arrives. It’s horrible because you have to swipe a million times to even find the right bus number — but I have no alternatives.

If you’re not a fan of wearing things on your wrist, then the Apple Watch will be a big pain. I hardly ever wear anything on my wrist, even bracelets, and the weight of the Apple Watch gets to me. I take it on and off several times at work, and I’m constantly aware of the fact that every time I take off my watch, there is a chance that I will miss a notification.

My colleague comes in wearing an Apple Watch as well, so I deal with this newfound companion by spending unnatural amounts of time sending messages to him. It may be a bit creepy to send my heartbeat multiple times to a guy that I’m not dating, but I balance it out with a well-timed dick drawing.

His respect for me is surely lost forever.

I download a couple more apps to play with, which worsens my ability to look for apps. All I see in the haze of a groggy Monday afternoon is a mass of coloured dots. So many coloured dots.

The day passes in a blur, and the Apple Watch is now my best friend. I’m swamped at work, and the Apple Watch suddenly turns from a major distraction to a faceless, non-intrusive companion that helps me keep up with emails, messages, and texts. It starts to get to me that I can’t reply to WhatsApp messages, and it’s weird for me to respond to iMessages by speaking aloud to my phone. I work in a room full of writers, with their heads down in silence. This is not where Siri’s amazing dictating skill belongs.

I also had to travel to a new restaurant for lunch, and the Maps made the process much easier than it usually is. Instead of blearily staring at my phone like a lost tourist, the watch prompts me whenever its time to make a turn onto a new street.

My friends are impressed. I look like a boss.

I’ve also become that annoying person in a chat who sends nothing but the thumbs up in Facebook Messenger, but that’s mainly because it’s the only option I get on my watch, and I’m too lazy to get my phone out.

I predict that the Apple Watch will give birth to a brand new breed of annoying texters, perpetuating single-word responses and the emoji disease. I’m one of them. I’m not ashamed.

Today was an especially busy day, filled with much preparation for Vulcan Post’s first meetup. It was the first time I realised that I forgot that the Apple Watch was there at all — a frightening thought that the hype and glamour that comes with a new tech toy has finally faded. I now put on the smartwatch mechanically, unconsciously twiddle with the strap, and it’s become almost natural for me to look down at my watch to check both the time and for any new messages and emails.

And I guess that’s the way it should be. Being connected should be as easy as checking the time.

I use my camera remote to take a group photo of the team as the party winds down. “This is so cool,” one person says. We make horrible faces for the next 3 minutes.

So after one week, I try to answer the questions that my colleagues asked when I first got the watch: “What can the Apple Watch do?” Can I answer the question now? Honestly — not really. By pointing out its little features, like sending your heartbeat, getting all your notifications, reading headlines, or booking an Uber car, it doesn’t seem to be able to justify what the Apple Watch is.

The worst way to look at it is in the perspective of a smartphone — which is tempting when you have a tiny screen on your wrist. If you look at it that way, it’s probably the most useless thing you’ll ever buy. You can’t play games on it, you can’t surf the Internet or really text your friends. Everything you love about your smartphone has been cut up and served in many tiny, unsatisfying portions.

But once you get over that, and the Apple Watch begins feeling comfortable on your skin, you realise that the smartwatch changes your life in a different way. It is subtle and often unseen. It is being able to leave my phone in my handbag without having to miss a call, or swipe through headlines in a minute. It is not a gadget to lose your life in, unlike your laptop or tablet or smartphone. It’s hyperconnectivity resting against your skin.

I started out as an Apple Watch skeptic, and came out understanding how nuanced the smartwatch industry actually is. It’s become a lot less about asking “What the watch can do?” and more about “What potential does the watch hold?”, and as the current climate seems to show, the answer to the latter is “A lot”. But the Apple Watch is a smartwatch full of noise, pegged with bells and whistles to make it sexier and more intriguing. Sending heartbeats and drawing pictures with your finger will never be practical, but it is the perfect trick to get people to talk about it.

These bells and whistles don’t work on 6-year-old girls, as my niece revealed to me. It didn’t work on me a week after the amazing unboxing experience. In a month, two months, and more, they won’t work on you. But they will work on your friends who come up and say: “You have an Apple Watch! What does it do?”