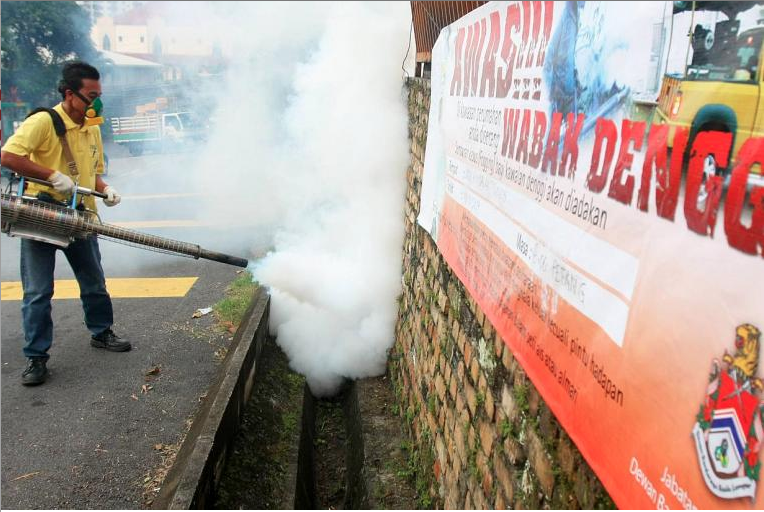 Dengue Fever is one of the many reasons as to why I’m continually at war with mosquitoes every time I see them zoom past me with the intention of sucking on my blood.

If you’ve ever been sick with dengue, you’d know and understand the pain that one has to go through when one contracts the viral disease. Some of the symptoms include high fever, sever headaches, and could also lead to more serious issues such as dengue hemorrhagic fever, enlargement of the liver and could eventually lead to death. You can read more about the symptoms here.

In fact, there’s an epidemic of dengue in Johor and an all-time high of 582 dengue cases were recorded in the second week of June alone. And in response to the epidemic, Johor has stepped up its fight against the disease and according to Ayub, 16 local councils have been notified to clean up the surroundings and also to engage local communities in “gotong-royong” to prevent dengue.

Some of the reasons as to why this is such an epidemic is because of the surroundings that are hardly maintained by many of the urban dwellers and also poorly maintained construction sites. Both of which are key mosquito breeding spots.

Along with the other efforts, fogging will be conducted in MBJB and MPJBT areas this Thursday until July 16, according to AsiaOne.

The kit contains the mosquito-repelling lotion and an Ovi Larva Aedes trap that’s designed to eliminate mosquito breeding and it also contains Biolarvicide and Mousticide that can kill mosquito larvae.

Also Read
I Tried Out The Oculus Rift For The First Time, Here’s What I Think Of It

Inno Biologics and Entogenex are working alongside Science, Technology and Innovation Ministry to conduct a dengue-free community pilot project in several high-risk areas in Selangor, Kuala Lumpur and Johor from this month.

In fact, it’s been proven to be effective in killing mosquitoes in countries like the Philippines, Thailand and Vietnam within a period of two months. This was stated after the signing of a trilateral cooperation agreement between UKM, Inno Biologics and Entogenex to incorporate innovation, research and industrial development on the 7th of July, 2015.

Along with the community pilot project, the Home Dengue Protection kits would also be distributed freely to the public in Selangor, Kuala Lumpur and Johor, with the aim of combating the disease.

These measures are key in combating the viral disease and in maintaining public health and safety.