“We Welcome Competitors”: M’sian Doctor Launches A Startup To Disrupt The Healthcare System 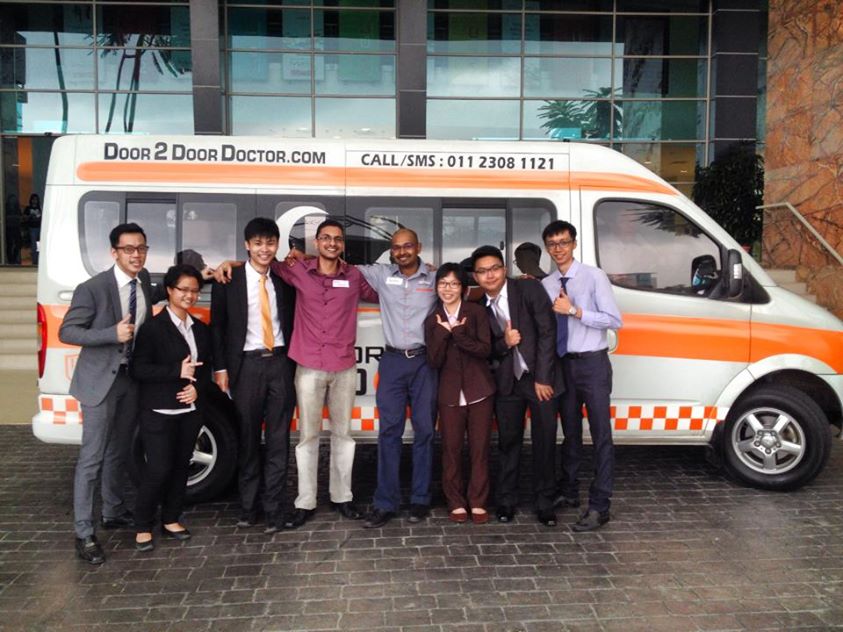 Technology is really accessible in Malaysia these days and the consumer market for smart devices are constantly growing without falter as well. It is with this very same notion that the country’s startup scene is growing in tandem with all the innovations and development coursing through the globe. No wonder many startups found ways to solve problems and create new solutions for the masses by utilising existing techs in hopes to create a better Malaysia for all.

In our latest attempt to uncover one such startup that focuses on saving lives while implementing mobile technologies, we found ourselves in the company of Dr. Prathaban Raju who co-founded the Door2Door Doctor that has been operating since 2013.

The Door2Door Doctor is a startup aimed at helping the community in Petaling Jaya to deal with the day-to-day hassle of commuting to the hospital. Offering four core services, which include Medical Transportation, House Call Doctors, Home Nursing Care and Home Physiotherapy, the startup consists of a team of highly trained and experienced doctors who are on-call 24 hours a day and 7 days a week—all to provide a non-emergency medical and transport service with their clean, comfortable and reliable vehicles.

In our interview with Dr. Prathaban Raju, he shares about the journeys that Door2Door Doctor had experienced through the years since the conceptualisation of the business until today, including his plans to expand the startup’s reach beyond the borders of Klang Valley.

“Conceptualisation started about two years ago while operations started 15 months ago. The first seven to nine months were considered our ‘pilot’ phase where we validate what actually our customers or patients need. After that period of long tests and trying things out, we eventually came down to four core services with the first being non-emergency medical transport, house call doctors, home physiotherapy and home nursing. Almost 90% of our patients require these basic services. Since January 2015, we’d been going all out on concentrating on these four services and the response has been pretty good!” he said.

Currently while trying to make ends meet, Door2Door Doctor got themselves involved in a lot of social activities such as joining Reach Out Malaysia to give food to the homeless, giving medical screenings to orphanages and offering their services in a school sports day.

“We like to give back about 15 to 20% of our revenue to the community and remain as a hero of giving back. I believe that’s also quite important to sustain the business in the long run,” Dr. Prathaban added.

“We’re hoping that these two programs can build up the traction and fine tune our business model. We’re not chasing for funding, as I would say that we’re more interested in solving the problem.”

As a doctor in a Taiping hospital, Dr. Prathaban used to have patients that travel from afar just for a five-minute consultation. He also realised how much of an inconvenience it would be for those who are disabled. That’s when the idea came into play. Shortly after that, Dr. Prathaban’s father was diagnosed with cancer.

“My wife and I are doctors and we were giving him all the care he needs at home, and I think we only went to the hospital once or twice just for scans. My co-founder Karl Cardoza also experienced something similar where his grandmother suffered similar problems. Then we realised that this is something we can actually do for a lot of people. We also found out that a lot of families don’t bring their family members to the hospital simply because it’s too expensive and difficult, and most don’t have the time,” Dr. Prathaban explained.

“People often ask me what are my clients like. Are they the ones who can afford or are they the ones who don’t have the time? I believe my primary clients are those who are desperate and really have no other options. Getting an ambulance to pick you up to the hospital is really expensive, it only takes a couple of minutes and less than five minutes after that, you’re sent back home. Sometimes, this is quite ridiculous.”

According to Dr. Prathaban , Door2Door Doctor is all about empowering the patient to receive the first line healthcare as best they can. “Sometimes, the families and patients just want reassurance. I am always very happy when I go to a home and I see that the patient is very well taken care of. These are just people with regular day jobs. But to see them providing the level of care is sometimes considered even better than what can find in a hospital. We want to educate family members to provide the right cares for the patients too,” he said.

“I would welcome competitors.”

Door2Door Doctor currently operates within the radius of Petaling Jaya, Selangor despite the overwhelming demand for their service.

“When we started off, we were quite ambitious. We wanted to cover the entire Klang Valley at first but we were overwhelmed. The pilot period taught us a lot of lessons. Also, our transport van couldn’t really go that far, which means we can’t come back in time to pick other patients up. As we’re still fine tuning, hopefully with the accelerator program, we can expand beyond our limits,” Dr. Prathaban said.

However, the healthcare startup does not cater to customers who require medical emergencies.

“We emphasised many times that we don’t do emergencies, there’s no way we can deal with an emergency at home. We take appointments a few days in advance. We hope in the future, we’re able to integrate with government policy, so once the service is at its peak, we can expand to provide other services that cater to other situations,” he added.

Door2Door Doctor is currently the only house call healthcare service in Malaysia and had been growing on their own accord with a focus on solving the problem and providing a good service for people.

“Ever since we started, we were always concerned with competitors. In fact, I think I would welcome competitors, it means we’re on the right track. And it also gives us an edge to be a bit more competitive and always be ahead,” Dr. Prathaban said.

Not Just A Doctor

Dr. Prathaban formulated digital marketing strategies for the business during the initial stages where he had to multitask between his job as a doctor and a new world entrepreneur.

“From just being a doctor, I had to study business models, I had to learn double entry book keeping, now I’ve also taken interests in learning coding because there were communication gaps. I also took lessons on Google AdWords marketing. I remembered initially I went for PhotoShop and Illustrator classes so that I can design the van from scratch,” Dr. Prathaban said.

Dr. Prathaban and his team had identified a few humps of high traffic areas in Klang Valley and hopes to cover those areas by the end of 2015. They’d also slated plans to further develop Door2Door Doctor’s software in order to venture outward.

“In the long future I would like to use this platform as a way of a big data management system. The potential is there and the possibilities are endless. Imagine doctors go to work virtually; they login to their PCs while nurses go around and with technological gears, and the doctors communicate with patients through teleconference while the data is being collected.”

“Imagine having a world map and you see clouds of patients with specific diseases where we can track and monitor their movements to look out for dengue outbreaks.  The technology is already there and it’s growing so fast. It’s all the matter of applying and managing it.”

“Right now I am just trying to keep the focus down on the business. I also work on the private sector and it’s already a big mess and my personal aim is to keep a better work life balance, which is quite crazy. Of course for the business, we would like to see things go global,” he added hopefully.

For more information on Door2Door Doctor and to make appointments, visit door2doordoctor.my or call +01123081121.

All images used are taken from Door2Door Doctor’s Facebook page.