Durians Go E-Commerce In Singapore, Proving That Anything Can Be Sold Online 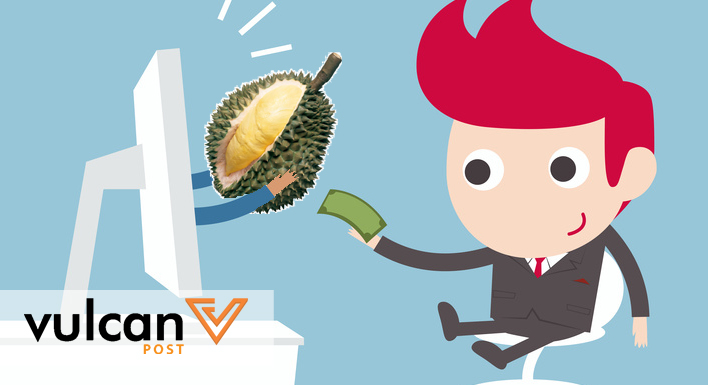 If you’re Singaporean, you will know full well the struggle between durian haters (who decided that the fruit should be banned from all forms of public transport) and their lovers. And every time durian season comes into fruition, it’s the durian lovers who reach brand new levels of euphoria.

But why go all the way down to the store to buy durians when you can buy them online?

Durians have followed in the footsteps of many other goods we used to go to the stores to buy. Cash Converters has made way for Carousell, makeup stores for Luxola, supermarkets for RedMart, restaurants for Foodpanda — the list goes on. I guess when fishermen started selling their wares on Qoo10, we should have seen this coming.

But does e-commerce work for durians?

There are quite a few online durian stores in Singapore that have already seen the potential in going digital. Online store Durian Garden has over 3,000 eager followers on Facebook, while popular physical durian store at Geylang, Wonderful Durian, has set up a pretty comprehensive online site — it even helps you throw durian parties if you make purchases above $300.

Other stores try to give the age-old trade a modern twist: Jojo.sg, a local website, sells durians that come dehusked and wrapped in beautiful packaging. They are also sold with 2 packets of coconut water, hand gloves, and tissue paper. Durian Park has a rudimentary mobile app available on the iTunes store, allowing you to buy your favourite in-season durians while on the go.

But asking around, the general consensus seems to be that the online durian business has quite a way to go before they capture the hearts of all durian lovers. Tang, a Singaporean e-durian skeptic, expressed his concerns to Vulcan Post about the freshness of the produce when delivered. Just like every other product you buy online, there’s always a risk of the product not being up to par, and for durians, you can’t return it the way you return a piece of clothing.

“What happens when the durians delivered aren’t that good? What then?” Tang shared.

However, others are more optimistic about the prospect of the durian trade moving online.

“If its cheap and has a high reputation for delivering quality durians…why not?” mused Bing Han, another durian lover.

Durian stores like Wonderful Durian may be at an advantage in this space, leveraging on their reputation and success as a physical store to branch out online — a side-business that is growing and evolving with their existing customer base. New and fresh durian vendors Durian Park and Durian Garden may bring a modern twist to the trade by experimenting with mobile, but modern may not equate to reliable just yet. Modern is foreign, a stark contrast to the sweaty uncle at the roadside stall we know and love.

So will it work? Probably not for everyone. It won’t capture the attention of the most hard-core durian lovers, those who need to have the best quality durians, the way our parents taught us to look out for. But for those who are lazy enough, hungry enough, or just want to hold a massive durian party at the convenience of a single click, then digital may be the way to go.

Just another example of being able to sell just about anything on the Internet.