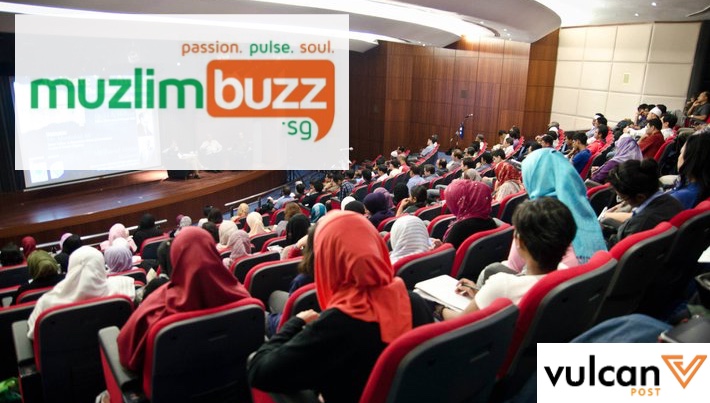 On Muzlimbuzz.sg, there is an article on the evolution of the Eid experience, where the writer takes you through the experience of Hari Raya Aidilfitri as a child, and now, as a married man. It’s thoughtful and light, accessible to any sort of audience. Browse some more, and you’ll come across a handy article recommending mobile apps for the tech-savvy Muslim.

And then there’s the hard-hitting news as well — an open letter written in 2011 to Mr Jason Neo, Christian Eliab Ratnam and Donaldson Tan. Background story: Young PAP member Jason Neo posted a picture of a school bus with Muslim students with the caption “Bus filled with young terrorist trainees”, Christian Eliab Ratnam posted a picture with text saying that Islam is not a religion but “an authoritarian, political doctrine which imposes itself by force”, and finally Donaldson Tan is guilty of reposting a picture of a pig superimposed on the Kaabah (the most sacred site in Islam).

So what is Muzlimbuzz?

An e-magazine that caters to the modern, active, socially-engaged and spiritual Muslim, Muzlimbuzz aims to document and articulate the Muslim experience, particularly of those in Singapore and the region. It’s one of the projects under SimplyIslam, an organisation dedicated to education, humanitarian aid, social and community development and literacy services to facilitate the progression of society. Initially slated to be a print magazine, the publication took the pilot project online in 2011, and it has been ongoing since.

A balance of hard news and light pieces spanning fashion to tech, it was started by editor Ameera Begum out of necessity. “I didn’t find any reading material that I felt represented me and many of my peers. I used to read Seventeen magazine but there weren’t any magazines that catered specifically to the Singaporean Muslim audience. I guess there were already publications by different organisations but they were either too preachy or too detached from this worldly life. Being an avid reader, I wanted to be able to read from others and to help fill that void,” she explains.

As an editor, Ameera has seen what sort of content receives the most attention, and as you can guess, they’re the controversial ones. She said, “Highlights so far include getting our Open Letters — people apparently love such things — shared widely. 2 years ago, the local interwebs exploded with anger when a certain Alex Chang said the call to prayer in Ramadan at McDonalds was “irritating”. People reacted horribly and a Facebook page was even created asking McDonalds to ban Alex Chang. Ridiculous, I know!”

Reacting adversely, the comments on the page began to take on a racial and religious vitriol, and when Muzlimbuzz published ‘Response to Alex Chang’, Ameera said it was well-received, and that it was nice to see “some sane voices amidst the crazy, ugly chaos.”

The open letter to the three men mentioned earlier also got reposted on The Online Citizen, so its readership extended to non-Muslims as well. “It’s nice when non-Muslims read and appreciate and understand,” she said. “It’s not so much virality I’m looking for, but that people can relate to what we’ve written and that it benefits them. And especially so that the youth feel represented.”

Ameera juggles a heck load of things. Being in a small organisation means taking on multiple roles in SimplyIslam’s other arms — besides being an editor and writer, she also handles marketing and promotions for events and classes at the organisation.

Still, the pro has some tips for all writers:

Stereotypes in a multicultural society

Of course they exist, especially in a multiracial, and multicultural society such as Singapore. And according to Ameera, the “biggest, greatest misconception is how Islam is a Malay religion instead of a truly global one.”

Despite growing up with Malay Muslim neighbours and having Islam be a part of local culture since Singapore was founded, Ameera is still surprised that some Singaporeans are swayed by the Western “Islamic terrorism” rhetoric promoted by Islamophobes themselves. “I’m not sure if it’s because our Islam is seen as less Islam than the ones they see on the Internet, or because people actually watch Fox News or read Western publications and believe those more than their own local, real experiences with Muslims here. It’s very strange. I wish that would change.”

And with Racial Harmony Day having come and gone so uneventfully, she wishes people would go beyond celebrating Racial Harmony Day with just food and dressing up, and actually learn something about each other’s religions and culture — this goes for Muslims as well. She adds, “I find some of us want so much to be understood and yet don’t know the difference between Buddhism and Taoism. Understanding and having good relations needs to go both ways.”