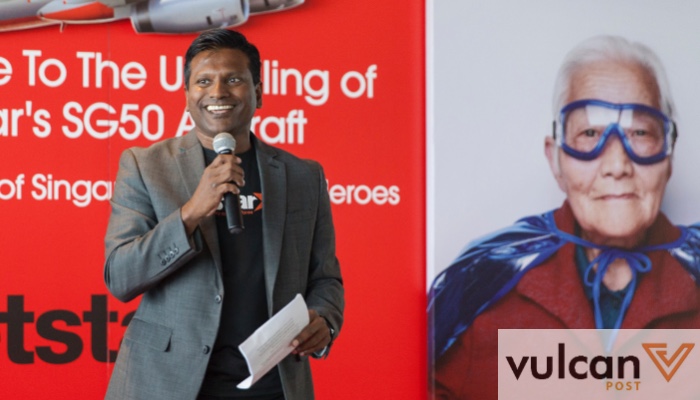 We know, we know. Another SG50 gimmick, right? Not quite. It seems that some people are getting the hang of this SG50 campaign thing, and are actually excelling at it — as we saw more recently with Google Shophouse.

First things first: Jetstar is not the first to unveil livery styled specially to welcome this year’s Jubilee celebrations. Scoot and Singapore Airlines have already revealed their SG50 designs, although not quite to the best reception. But it seems that Jetstar has managed to one-up the other airlines in the livery game by making it about the people and the community.

Subtle yet bursting with colour, the unique livery on the A320 aircraft features the faces of 50 outstanding Singaporeans, each of them with an exceptional story to tell. The unveiling of the livery was the culmination of a four-month campaign that started with the call-out to fly 25 Singaporeans living abroad back to their homeland to celebrate the nation’s birthday. The 25 winners join 25 everyday Singaporean heroes also voted in by their family and friends.

The extraordinary stories include a professional who gave up a comfortable job in Singapore to help the poor, a single mom who hasn’t seen the skyline of Singapore for many years due to financial difficulty, a firefighter who adopted his wife’s children from her previous marriage and juggles being a husband and a Superman to them, and an adorable 68-year-old who is a leader in the cosplay community.

Jetstar Asia CEO Barathan Pasupathi said that he was moved by the stories of all the winners, and personally narrated them before the unveiling of the livery. The event — though a small, modest affair held in a waiting room in Terminal 1 with local-style kopi, teh, and kaya toast as refreshments and snacks — was oozing with warmth and sincerity.

Attended by those featured, their loved ones, and selected members of the media, I watched as everyone clambered to get their picture taken next to their illustrated portraits, occasionally asking the photographer “Same, or not?” Heartwarming, meaningful, and real — great job, Jetstar, for making it about the community.

And also, let’s just say bypassing immigration security on a weekday afternoon when I was not actually travelling overseas was pretty cool.