10 Reasons To Convince You That Windows 10 Is Legit 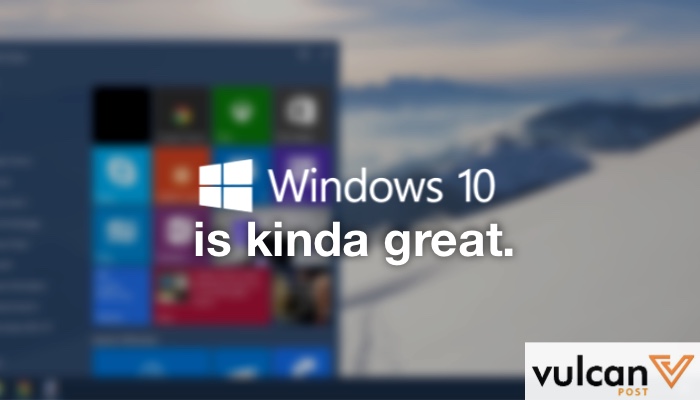 Microsoft recently announced the launch of Windows 10. Released via a free download, they have seen more than 14 million devices utilise the spanking new operating system. It’s definitely an improvement from the previous Windows 7 and 8, and is going to make a lot of PC users happy. Before all you Apple users scoff at it, here’re some of the stellar features on Windows 10.

First things first: Windows 10 is more than just a PC operating system — it will also run on Windows phones and tablets. Continuum is designed to allow universal apps to run across all platforms, from your PC to your tablet, and even the Xbox One. This means you can pretty much turn your Windows 10 phone — or any screen — into a tiny but full-blown computer.

Microsoft’s answer to Siri, Cortana, is at your every beck and call — whether you need that draft you wrote to be extracted from your desktop, or to check if it’s your mum’s birthday, or if your cat’s vet appointment is due. You can also ask Cortana “What’s up” or “Surprise me”, and she’ll reply you with interesting facts on what happened on this day in history. Also, if you’re a big fan of Halo, this makes it even more fun for you.

A blend of the Windows OS we grew up with in school computer labs and the sleek, tiled layout of Windows we know now, Windows 10 returns the Start menu to the lower left-hand corner of the desktop.

Desktops are also highly customisable. With Task View — located next to the Start button — you can create a different one for every project you’re working on, increasing your focus. And if the tiles annoy you, remove them and return to the pure desktop we’re familiar with.

4. The Edge of Tomorrow

Previously labelled Project Spartan (another Halo reference!), Microsoft Edge is the phoenix that rose from the mediocre ashes that was Internet Explorer.

It’s a complete reboot from IE, is faster, leaner in design, and features some choice tools like Web Note — a sort of magic marker for the Internet where you can capture an image of a website, add notes or sketches, and save or share it. This is sorta like a screenshot tool, but it actually captures the website, and not just an image on the screen. Our only gripe? The default search engine is Bing. But this can be easily changed.

Even the core apps get a redesign: Mail, Calendar and more are looking really good on the Windows 10. And they work on all Windows platforms, so it’s pretty nice to see their interfaces fit nicely into screens of all shapes and sizes.

Now, now, Apple enthusiasts, do not gloat. Microsoft users can now use their touchpads to activate actions: swipe three fingers down for Desktop, and up for Task View. There’s a lot more shortcuts you can learn, from swiping left and right, to actual commands. About time Windows, about time.

7. The Marriage of Windows 10 and Xbox One

With the Xbox One app on Windows 10, you can now access your Xbox One feed on your PC. Check out the latest games, free downloads, see who is online for a game or two, and even edit your game footage to share it online.

Perhaps what is the most exciting feature is the ability to stream your console games to any Windows device — apparently, they’re working on vice-versa streaming as well. Not sure how it’ll work but it all sounds pretty cool.

Although they’re billing themselves to be a “productivity-centric” OS, some of the pre-installed games say otherwise. How about some Candy Crush on your desktop? This, along with classics like Solitaire, Minesweeper, and Hearts, will be available on your OS. We’re kinda waiting on Ski Free to make its comeback, though.

On top of Cortana as your personal assistant, the Action Centre is also where you can get your notifications. Popups remind you of all sorts of useful and important information, and unlike Windows 8 where notifications get deleted as soon as they pop up, the ones on Windows 10 will be archived so you can check the list later on to see what else you’ve missed.

10. Fingerprinting into the future

As part of Windows Hello, you can unlock your device using fingerprint biometric technology, face recognition, and even iris scanning. This of course depends on your computer, so you might want to upgrade and pimp out that PC of yours for some high-level sophisticated technology.

I guess for all you Microsoft apologists, it’s time to rejoice now. There still might be some bugs to conquer along the way, but it looks like they’re on to something great with Windows 10 now, and in the near future.