Where Are They Now? A Look At What (In)Famous Singaporeans Have Been Up To Recently 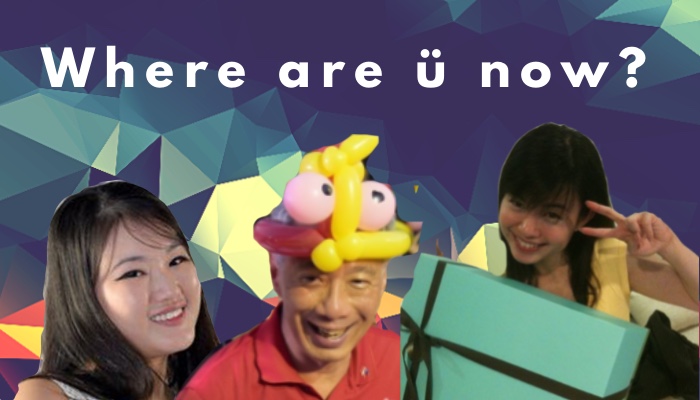 They say a nation’s culture resides in the hearts and soul of its people. What a colourful culture we have then, with politicians, cheaterbugs, bloggers, entertainers and more making the news through the years. As SG50 draws to a close, we put together some of the most interesting and prominent fellows we’ve met along the way, and catch up to see what they’re doing at the moment.

Claim to fame: 2011 was a tough year for the lady; young and naive are the worst traits to have for a wannabe politician. Of course people are going to scrutinise you on social media — something she did not foresee. She got picked on for her love for Kate Spade bags and her zest to find the resident littering sanitary pads, and then the late Lee Kuan Yew had to walk out just as she stood to speak in Parliament.

Where she is now: She just “popped” a baby boy, will be running in the upcoming General Elections, and views on her are generally favourable…it seems almost like a movie script.

Claim to fame: Business as usual, Jover scammed a Vietnamese tourist into paying an exorbitant amount for an iPhone 6. This time, the entire incident was caught on video — Jover being an ass, and the Vietnamese on his knees begging — and went viral. He even got pizza ordered to his home by Internet vigilantes SMRT Ltd (Feedback); not everyone can brag about that.

Where he is now: In a really bad place, actually. He’s faced with 26 charges including cheating and criminal intimidation, his wife has divorced him, he’s been unemployed since the incident blew up. Tough love.

Claim to fame: For her intelligence! Not. She was crowned Miss Singapore World in 2009, but what made her famous (or infamous) was an interview which showcased her wit and eloquence. Sadly, she had to give up her crown after her credit card frauds were revealed. A rogue beauty queen? People love that shit.

Where she is now: After a series of publicity stunts, short employment stints, and a pending movie, she seems to be keeping it on the down low. She still blogs though — any coder out there who wants to teach her some HTML?

Claim to fame: He was found guilty of defaming Lee Hsien Loong, and was ranked by Yahoo! as Top Newsmaker of 2014. He later took part in some draggy, and at times cringey court proceedings earlier this year, which was widely publicised by the media.

Where he is now: He has reportedly applied to join the Reform Party (RP) to run in the upcoming General Elections, stating on his blog, “I want to be able to enter government, to debate about these issues and allow policies to be passed to protect Singaporeans.”

Claim to fame: Do we need to say more? Suddenly awakening the sleepy dragon, this young boy got the whole nation and even the international community talking and debating. He became part of a bizarre trial that saw him spend four weeks in jail, much to the protest of various human rights groups worldwide.

Where he is now: According to his lawyer, Alfred Dodwell, the teen has agreed to go for counselling and is ready to ‘cooperate’. He also did his part to contribute to the SG50 celebrations with three new videos: how National Day sucks, how National Day songs suck, and a response to his haters. He also tagged along on Reform Party’s walkabout. This dude is on a roll.

Claim to fame: The foil to Tin Pei Ling, Nicole Seah was the youngest politician, representing the National Solidarity Party (NSP) in the 2011 General Elections — she was 24 then. While Tin was young and naive, Seah was composed and poised.

Where she is now: She left the NSP in 2014, moved to Bangkok to focus on her advertising career, and had a role in the historical film 1965. She’s doing fine. We’re not so sure about her ‘replacement‘, though.

Claim to fame: Lady boss at mega-church, aka Christian evangelist, and co-founder (and pastor) at City Harvest Church. She was allegedly involved in misusing church funds to boost her pop career. Also responsible for the phooey that is China Wine.

Where she is now: Still awaiting the verdict of the trial, but she’s stopped singing. For now.

Claim to fame: Bringing the fashion show to the courts during the City Harvest Church trial. Oh yeah, she was also the former CHC finance manager, meaning that she has a lot of secrets. That’s why her hair is so big.

Where she is now: If you enjoyed her sartorial choices, well, you can find them on…her very own blogshop Missy Stella, which she set up with a longtime friend. The lady’s entrepreneurial through and through.

Claim to fame: Won the second edition of Singapore Idol, and then became the world’s first Asian Idol.

Where he is now: Found a new calling — religion. Co-founded an organisation, FHRM Youth, that promotes Muslim education and a way of life among young Muslims. He also got married last year. Looks like the songbird has settled down.

Claim to fame: It was quite the notable 2015 for our PM: he had to deal with the death of his legendary father, took a blogger to court, told us about ‘natural aristocracy’, and got introspective about Singapore’s problems in the future. A bittersweet year.

Where he is now: Still the Prime Minister. Also, seemed to enjoy the National Day Parade.