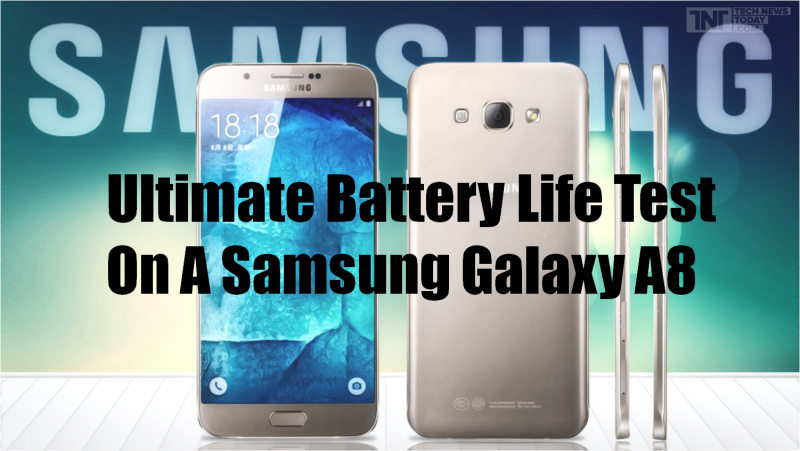 I was given the opportunity to review Samsung’s titan-sized phone, and no, it wasn’t from the Galaxy Note lineup. Instead, it was from the mid-range Galaxy Alpha series, which I was genuinely curious about. I have to admit though, my curiosity stemmed from the fact that this is a mid-range phone with a high-end price.

The Samsung Galaxy Alpha series boasts a full metal body, something that wasn’t seen on a Samsung smartphone until the Galaxy S6 & S6 Edge, and a camera that takes beautiful pictures. I’m not kidding, the Alpha series pretty much made compact digital cameras obsolete.

But enough about that, let’s focus more on the phone at hand.

The Samsung Galaxy A8 is the biggest of its siblings, with a screen as big as the ones found on the Galaxy Note lineup at 5.7 inches. Just like its older brothers, it sports a full metal body and it’s pretty thin to boot. The phone itself isn’t hard to hold on to as the screen isn’t wide like the original Samsung Galaxy Note.

The Galaxy A8 also boasts a great camera and a front camera capable of wide-angle selfies. The camera on the Galaxy A8 is pretty much the same as the one found on the Galaxy S6 Edge, high quality pictures taken with a 16 megapixel sensor. If your DSLR died and you need to take pictures, the Galaxy A8 makes a pretty good substitute.

However, unlike the Samsung Galaxy S5, it’s not waterproof so don’t plan on taking pictures in the shower yet…or better yet, please don’t do that at all with any smartphone.

Another difference with its flagship cousins is its speakers—the Galaxy S6 and S6 Edge adopted the iPhone-style speakers on the bottom part of the phone, the Galaxy A8 gets a cute little speaker beside the camera lens. Seriously, the camera lens is bigger than the speaker, and that rarely happens as cameraphone lenses are never big.

The one feature that Samsung was pushing for the Galaxy A8 is its ‘good battery life’. To which I wondered, how good can it be? Can it be as good as the old school Sony Walkman phones? Or will it still fall to the norm of today’s smartphones which is 1 day’s worth of battery life, at best?

Regular usage of the Samsung Galaxy A8 proved to be quite satisfactory. With the high usage of Whatsapp, social media like Facebook, Twitter and Instagram, calls, less than half an hour of YouTube videos a day, no game-playing, and the brightness set to half, I got easily 2 days worth of battery life before it reached critical levels.

Not bad, seeing as I message frequently and you’d be able to tell from the amount of notifications coming in like crazy.

Ultimate Battery Test on The Samsung Galaxy A8

The Samsung Galaxy A8 has an ample 3050 mAH battery but it’s non-removable so when the battery is dead, it’s back to power plug city. Our battery tests were separated into two sections, the video test and the game test.

For both tests, the following settings were made:

With that said, let’s proceed to the first test.

The video I chose for this test is the NVIDIA PureVideo HD 1080p Test video, which ran for about an hour and 5 minutes. In case you were wondering which video exactly, it’s this one:

I made sure that the video was running on Full HD 1080p quality for maximum beauty and resource-hogging. I just left the phone to play the video for the whole 1 hour and 5 minutes duration in front of me while I was doing other work so that I can immediately check the phone after the video finished playing.

The results? I’m quite surprised myself.

At the end of the video, there was still 83% battery life left, meaning only 17% was used throughout that whole video duration. What does that mean? You could play about 6-7 hours worth of Full HD videos before the battery is completely empty. Potentially more than that if the brightness isn’t set to the maximum level.

For additional notes, the phone still had some SMS, Whatsapp and social media notifications coming in while the video was playing which should affect the battery life a tiny bit. Things are looking good so far for the Galaxy A8.

Now let’s see what happens in the game test.

The game I chose for this test is ‘WWE Immortals’, a fighting game with WWE wrestlers as characters and their movesets executed with a more superhuman twist. I wanted to go with Blood & Glory as it’s generally known to be a graphically-intensive game but the game kept crashing on me so I had to go with the next big thing (no Brock Lesnar pun intended).

To help measure the test, I made sure the battery life was at a full 100% charge and used a stopwatch app from my computer. The game is then run in the same conditions as the video test, with full brightness, etc.

The Galaxy A8 lasted 4 hours and 46 minutes before the battery died. It’s noticeably shorter than watching videos but given that games would require more interactivity, or more touching in general, and the game would have to load resources over and again, it does make sense. It may reach 5 hours or more with a lower screen brightness.

One thing I’d like to point out is that after about an hour or so, the phone started to get hot. It wasn’t to the point where the phone would be overheating but it felt uncomfortably warm. Fortunately it didn’t get any hotter, so my hands and the phone itself was spared from any harm.

It was kind of crazy to be gaming for nearly 5 hours straight on a mobile phone but I’ll admit it was pretty fun. I doubt anyone would want to game for 4-5 hours straight (no offense to anyone who does) but if anyone’s worried that gaming on the Samsung Galaxy A8 would drain the battery extensively in under 2-3 hours, I can safely say that it won’t.