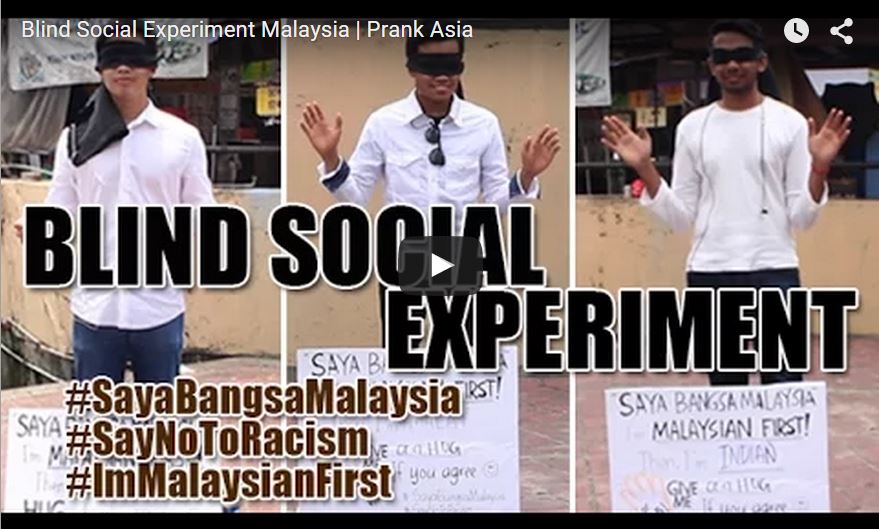 In a country like Malaysia, people enjoy a large racial variety as well as the culture that comes with it. Unfortunately, this also brings about a variety of tension that people have to face every day. Due to the recent rallies and demonstrations, it’s not surprising that some might feel racial friction between one another as a result.

However, despite these times, three young men by the names of Sathisvaran Santhian, Choo Jian Tatt and Muhd ​Shukri Rahmad took it upon themselves to make an attempt to show others that everyone may come together no matter their racial background, with the message that they are Malaysian first, before anything else.

They conducted the social experiment at SS15 in Subang Jaya. They wore blindfolds and had placards saying “I’m MALAYSIAN FIRST!” and asking strangers to give them a hug or a high five to promote peace. The result was something rather incredible.

In an interview with Sathisvaran Santhian, who is a Media student at IACT College in Petaling Jaya and also works part-time at Tarantella Pictures for their Prank Asia section, said that the idea came when the three of them thought of producing a social experiment.

Sathis, who has had a long dream of producing a film, said, “I’ve always wanted to do something that relates to a multi-racial theme, hence came the idea of ‘I’m Malaysian First’, an idea which was first made popular by Marina Mahathir.”

The objective of this social experiment is to inculcate awareness by identifying all Malaysians as Malaysians first, followed by I’m Malay, I’m Indian or I’m Chinese. This can be seen as a way to bring a new culture that’s against racial discrimination that can be passed on to younger generations.

The experiment took approximately one and a half hours and received numerous positive responses by passersby and netizens. Facebook user Ashley Grieg witnessed the scene and expressed her excitement which went viral:

Regarding the responses by the crowds, Sathis described he was overwhelmed by the support, so much so that he started to cry in the first two minutes. He said, “I used to be a victim of racial discrimination when I was young so I made a choice to surround myself with positive and optimistic people.” He then added, “That’s why I was shaking when I had my eyes blindfolded because this experiment was out of my comfort zone. However, I felt better after I had the first hug.”

In the beginning, the idea was so close to be rejected due to fear of sensitivity among Malaysians. Sathis, however, successfully convinced the management that this social experiment is merely to get the message out and see the responses by other Malaysians.

Sathis also said that they weren’t allowed in the premises, because they had no permit to conduct the experiment and the management came with a policeman to remove their placard as they felt it was related to politics and that isn’t allowed in the college campus.

So in the end they had to reshoot the video and eventually, all of their hard work paid off.

When asked how the team would evaluate the success of this campaign, Sathis said, “What determined the success is how viral the hashtag can go. The amount of support and spreading the message using the ease of social media is what I personally wanted and was my initial interest as well. The video also serves as a seed to help getting more shares and comments among netizens.”

You can watch the full video below and let us not forget to thank Marina Mahathir for coming up with such a beautiful slogan Saya Bangsa Malaysia.

Also Read
Netizens Applaud This Kind Hearted Muslim Who Did Something Not Many Would Do
Categories: Lifestyle, Opinions, Luminary, M'sianspiration, Malaysian