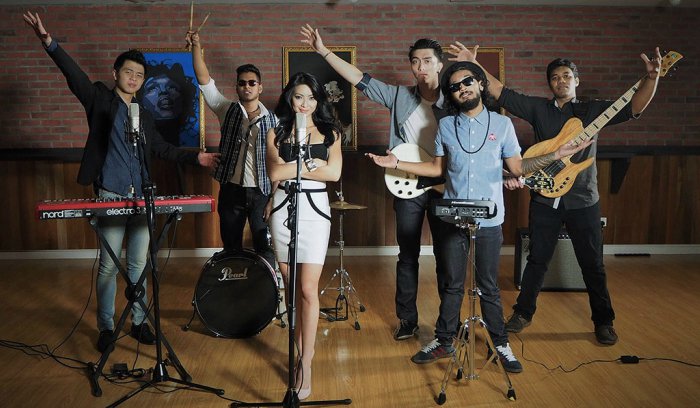 Every budding musician’s dream would be to finally play outside the four walls of their bedroom and onto the big stage. Numerous songwriting competitions allow these musicians to stand a chance to have their music get across to a wider audience, and Project Aloft Star is one of such platforms.

Project Aloft Star 2015 recently concluded, with 23-year-old Thai-Swedish lass, Jennifer Lackgren and her band The Scallywags winning the South East Asian cluster of the competition. There are three clusters in total including China and India, and in last year’s competition, a Malaysian band called GTXperiment won the top spot in the competition which seeks out musical talents from Asia Pacific.

The guys of GTXperiment shared their experience after a year of being together as a band and how they still find the experience a surreal one for them.

“Being back after a year made us realise how far we’ve come and how big of a career booster Project Aloft Star has been for us. In the past year, we’ve been working on releasing our debut album and realising along the way that it’s not as easy as it seems!” GTXperiment told Vulcan Post.

Upon winning the competition, the guys also had the opportunity to play at the grand opening of Aloft Seoul Gangnam in Korea. After releasing their album which will tentatively be in early 2016, the band plans to tour Japan, Taiwan, India, and the UK, as well as South East Asia.

The band says that a typical songwriting session would be different for each member, and they would generally play music together until they get an idea that they collectively like. Then, they will proceed to keep working on it until a full song comes out.

“The best part is being able to make music with each other and to share ideas as well as learn from each other. We’ve met amazing and inspiring people along the way too, which we are glad to call our mentors,” shared the band about what has been the best and worst part of producing their forthcoming album.

GTXperiment derives inspiration from just about anything in their surroundings, and they are affected by other people’s stories, as well as each other. “Our sound is a blend of all our musical backgrounds, which is quite a spectrum. We love trying out new ideas, experimenting with different sounds and fusing our music together. Dr Frankenstein music would be apt,” said GTXperiment.

Most Asian parents would be opposed to the idea of their kids becoming musicians, as they are under the impression that it is not a real career. The guys of GTXperiment were fortunate to have supportive families, but they were also asked the same typical questions like, “How are you gonna make enough money to support your family?”, “Are you even gonna make any money at all?” and so on.

“We’ve realised though that it’s just parents being loving and worrying, but they’ve supported us from the get-go. The best part about being a band is that we have other people to be crazy with, to share insane ideas with, and who get every crazy idea you throw out,” said the band.

Rise Of The Malaysian Music Industry

The Malaysian music industry is booming at the moment and homegrown bands like Paperplane Pursuit recently garnered a top 30 spot on Billboard’s Mainstream Top 40 Indicator Chart. This is a great feat for a Malaysian band, as not many musicians in this country has a chance to do that.

GTXperiment said, “We feel that there is support amongst singers and fellow musicians within the industry. But not so much support from the public, especially when it comes to English songs. So, we strive trying hard to produce songs that are accepted internationally, especially in the West in order to be recognised locally.”

Being a part of a competition also helps kickstart the careers of budding Malaysian musicians. The band agrees that there should be more competitions like Project Aloft Star as it encourages singers and songwriters to put in the effort to win the competition. “Winning it definitely boosted our confidence and our belief to continue to try and work harder at what we love doing and that’s making music.”

An Unlikely But Favourable Partnership

Project Aloft Star seeks to bring out the emerging unsigned talents in the Asian region whereby winners would obtain a chance to be featured on MTV, as well as a cash prize of USD 10000. The competition establishes a collaboration between MTV Asia and Aloft Hotels, and first started off from North America.

The correlation between a hotel and music may seem like an unusual one at first sight, but Senior Brand Director and Asia Pacific Brand Management of Starwood Hotels & Resorts, Vincent Ong said in a recent press release that music is core to the Aloft brand’s DNA. “The partnership with MTV Asia has not only shown that we share the same passion for live music, pop culture and design-led initiatives, but also cements our objective to serve as platforms to be the driving force to discover great new music experiences across Asia Pacific.”

With such a partnership with MTV Asia, Aloft Hotel, a brand which is synonymous with the hip, urban crowd can now further appeal to the younger generation and strengthen their target audience. This is a melodious move from the company as it is also able to provide budding musicians like GTXperiment with a chance to showcase their talents to the world.

For more information on GTXperiment, you can check out their Facebook page.