Cat Welfare Society, And Whether Social Media Can Actually Save Singapore’s Cats 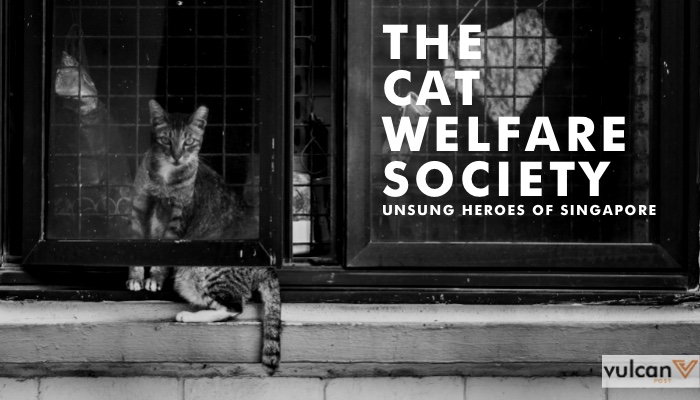 Everyone knows that cats rule the internet. From celebrity cats to hours and hours of videos recording cats doing inane things like jumping, eating watermelons, and even sleeping have pretty much overtaken and overwhelmed the online community.

It makes sense that social media will actually help cats IRL (in real life) too.

For Singapore-based movements like Cat Welfare Society, social media plays a large part in getting the word out there. With a big cat community, which have inspired popular Facebook pages like Humans of New York-esque page, Cats of Singapore, and Cats of Redhill (think of it like a Residents Committee, but for cats), it is integral in CWS’s quest to get the word out there. But how much can social media really do?

In the past few years, terrible cases of violence towards cats have been reported quite widely in the media. From the senseless mass poisoning of cats at Pasir Ris and Sembawang to the cruel case of dismembered kittens in Tampines, it’s hard to comprehend how cats are worshipped on the Internet, and treated so badly in real life.

According to CEO of the Cat Welfare Society, Joanne Ng, public misconception about cats is a challenge they face frequently. “We receive quite a few emails from the public every month asking us to remove a community cat from their block of flats because they believe the cat is evil, dirty and stalks them for no reason. Many don’t understand that cats are actually quite affectionate if you spend some time with them and get to know them. They are also self-sufficient in the way of cleanliness, as they spend a lot of time grooming and cleaning themselves and would never intentionally cause nuisance,” she adds.

The Cat Welfare Society have also been working with the local authorities and lobbying for harsher penalities for animal abuse.

Joanne says, “Whilst our goal is to save lives everyday, occasionally some will fall through the safety net and we can’t get to them in time. With a very limited budget, limited time and resources, there’s only so much we can do and it breaks my heart each time I hear of an abuse case or an abandonment case.”

Officially approved and registered as a society in 1999, and a charity in 2004, the Cat Welfare Society has been run mostly by unpaid volunteers who have full-time professional jobs. There are 3 paid staff though — two full time (one office manager and one outreach manager), one part-time outreach manager – and the CEO, who donates back her wages to Cat Welfare Society in a bid to reduce expenses and help the cause.

The Society is also not funded or affiliated with the government and most of the funding comes from donors. The struggle with funding is a huge challenge for them, and they scrape by each year doing the best they can with what they have.

“Taking on a nationwide mediation caseload has actually stretched us to our limits and we’re struggling to survive without further funding assistance, which explains our recent fundraising efforts. Whilst it was successful, it will only get us through to the end of the year and we will need to raise more funds along the way to be able to continue our work in 2016,” Joanne shares.

Since there is no office for the Society, they rely on their dedicated caregivers, fosterers, and the Members of the Board to help with rescue, rehabilitation and re-homing of the cats. So much happens behind the scenes thanks to the kindness of the volunteers. Although it may sound like the community has grown, Joanne shares that it is unfortunately not the case. “There are lots of people who step in along the way to assist and we truly appreciate their help and we are grateful for their support. But the long term carers tend to be the same few people who continue to give unconditionally, rain or shine,” she reflects.

In numbers, the Cat Welfare Society has managed to reduce culling rates from an all time high of 14,000 in 2006 to less than 1000 in 2014. They’ve rallied for the humane management of our community cats and have managed to stabilise the stray population over the years due to sterilisation programs.

Joanne comments that social media has worked both ways for them. Where on one hand, it has helped them raise awareness of the society and what they do, as well as to share stories and provide updates on cat-related incidents. Bringing together a community of animal lovers that rally together for the welfare of cats is definitely an advantage of being on social media.

“On the other hand, it can sometimes work against our network of caregivers who are already working overtime to do what they can for cats,” says Joanna. “We notice that many people are quick to report cases of abuse, abandonment or hungry strays but not many are willing to step up to actually do something about it. It’s easy to take a picture of a cat and post it up on Facebook requesting for assistance, but it’s a lot harder to step forward and be the change.”

“Sometimes, the issue with social media is the lack of accountability and responsibility. It’s easy to post pics and provide a description but behind the scenes, no one is auditing and checking if this is truly the case.”

There have also been instances of people asking for funds online to assist cats, with many taking credit for the rescue, according to her. But when it comes to asking the caregivers who are active on the ground, it’s not exactly the case — that sadly, the cat hasn’t actually been helped, and that the volunteers have been the ones who provided assistance and take on the cost of vet bills personally.

“As a registered charity with IPC (Institute of Public Character) status, we’ve had to maintain extremely high levels of financial diligence and transparency with all that we do, but this isn’t widely known. Perhaps this is where social media can work to our benefit, to help spread the word and share this with everyone,” Joanne adds.

“Leave no one behind”

With the lack of government funding and the lack of resources and spaces to help the community cats, it seems like it is an uphill battle the Cat Welfare Society are fighting. Still, Joanne says it is a worthy one.

“The fact that we are making a difference to the animal welfare scene in Singapore, that we are saving lives everyday and helping those who cannot help themselves. Through our work, we have given many cats a second chance in life, a chance that they rightly deserve. I am inspired when I see our team of volunteers working hard and doing everything in their power to save the life of a cat, despite working a long day at the office.”

“At CWS, we believe that every cat deserves a life free from fear and suffering and it is this belief that keeps us going.” She adds, “As we progress as a nation, we leave no one behind and this includes our community of cats.”

And until people begin to take note of the struggles of movements like CWS, social media will continue to be the mouthpiece of otherwise silent movements. If the internet loves its cats, as it claims it does, it should be the best place to begin saving them, no?

Donate to the Cat Welfare Society or adopt a cat!