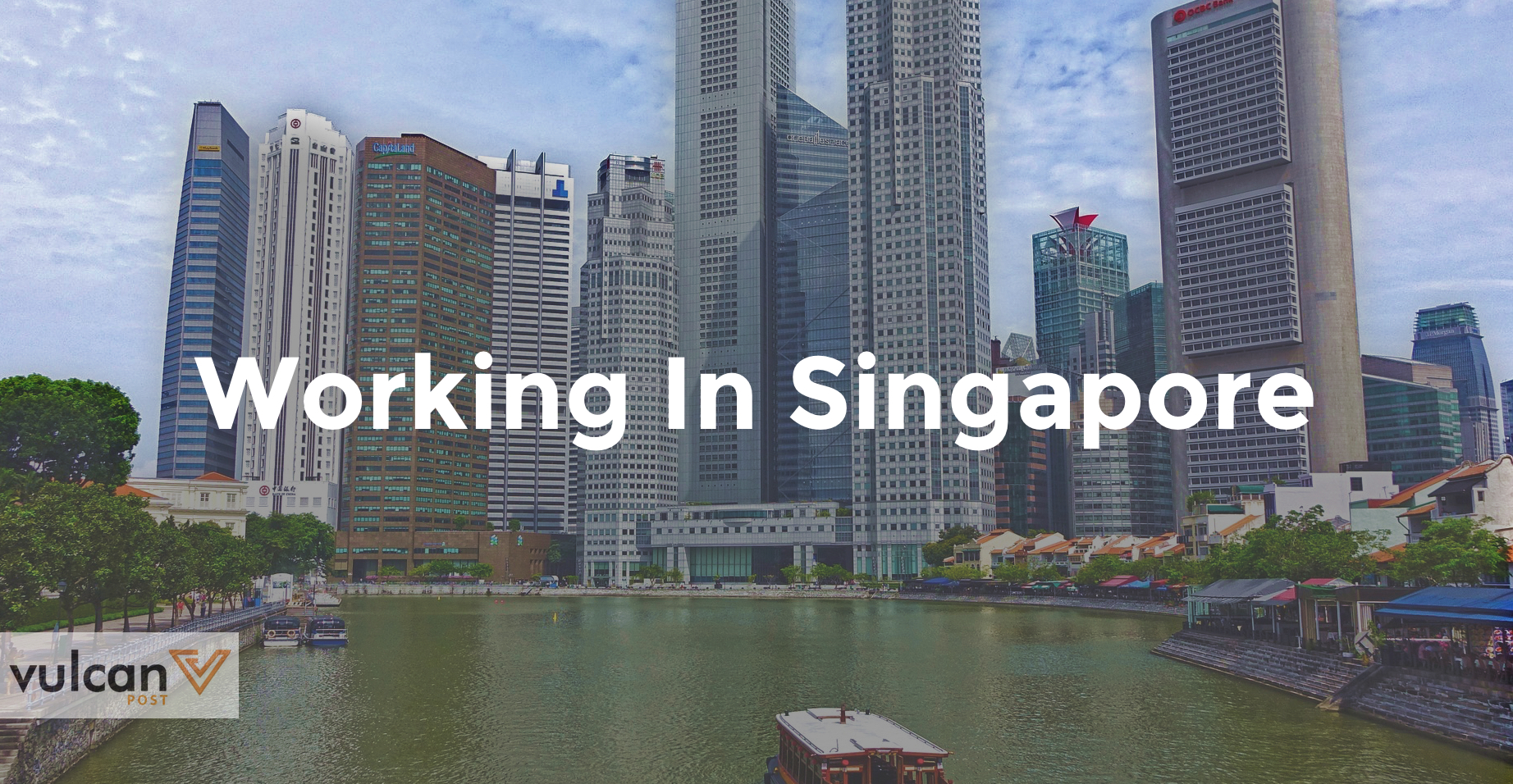 As we celebrate SG50 this year, many of us have become nostalgic and are looking back to reminisce Singapore’s past. We drudge up childhood memories and squeal over traditional toys, thinking about a simpler life catching spiders while children these days play with iPads instead. But as we remember the good of the past, it’s also important to remember how far we’ve come. Progress has made it such that life at Singapore’s 50th birthday is much better than it used to be at independence, especially for those working in Singapore.

Here are 7 things that were staples in the working world in the 60’s that we’re glad to be rid of in the 21st century.

While we’re used to thinking of our salaries as part of a monthly system, there was a time when daily-rated salaries was a norm. People who were paid their salaries daily often made up the poorer lot, and took up blue-collared work like grave-digging, road-sweeping, and incineration plant management. This meant that they often weren’t very mobile, and pay increases were really, really negligible.

It was only in 1992 that the Amalgamated Union of Public Daily Rated Workers (AUPDRW) — a union protecting the interests of these daily rated workers — helped these workers gain access to skills development and negotiations with their employers. Through a tripartite effort amongst the Government, union and employers, much effort has gone into bettering the lives of these daily rated workers via multi-faceted approaches.

One beneficiary is pest control worker Jasmin Mohamed Ali, who earns about $1,200 a month. Armed with only primary one education, he shared that he has benefited from various courses, including a vocational license that now allows him to work part-time as a driver to bring in more money to support his four children.

When Singapore slipped into recession in the mid-1980s, it caused widespread panic that many people were going to be retrenched to help companies save costs. In order to help the country recover, our unions decided to forego the 1985 wage increases recommended by the National Wage Council (NWC). Instead, NTUC led the unions to introduce a flexible wage system that would temporarily cut wages until companies were able to recover, and accepted cuts in employers’ contributions to workers’ Central Provident Fund (CPF). This allowed Singapore to recover from the recession while minimising the number of jobs lost.

While earning less money is never a happy experience, having a lower-paying job is still preferable to losing your job completely, especially in the middle of a crisis. This has helped Singapore through the worst recessions, softening the blow that may have caused widespread unemployment. Later, the Government as well as business leaders credited NTUC’s actions for Singapore’s quick recovery from the recession.

This is an effective demonstration of how it is often better to work together for the collective interests of all parties, rather than to adopt an adversarial stance and fight with one another, when the common ‘enemy’ is the economic downturn.

It is no wonder that Prime Minister Lee Hsien Loong had spoken positively of the relationship between the Government and unions, calling it the strongest and the longest-lasting in the world. He said this during the May Day Rally earlier this year:   “Our unions are equal partners with employers and the Government. The Government, workers and employers in Singapore are partners in growing and upgrading the economy. This tripartite system has produced results not just over one or two terms of government, but for 50 years.”

3. Unequal rights for both blue and white collar workers

It used to make a difference whether you worked in the office or at a construction site. The rights you were entitled to were different: in the 60’s, blue-collar workers only got seven days of annual leave, as compared to the 14 days that white-collar workers got.

With the 1968 Employment Act, this was standardised, so that all workers were entitled to the same amount of leave — seven days — and they all had the opportunity to increase that number to 14 after 10 years of service.

4. No support for the non-English speaking

In a multi-cultural and multi-lingual city like Singapore, languages play a big part in the workplace. With many international companies coming into the country, many Singaporeans struggled to adapt without English-speaking abilities, and those who were unable to speak English were often passed over when it came to employment or promotion.

To counter this, Workplace Literacy (WPL) training was introduced in 2004 to provide Singaporean low-wage workers (LWWs) with the opportunity to improve their English. Over the last decade, over 100,000 workers (and counting) have attempted the WPL assessment, and more than 14,000 have benefitted from the WPL training.

Just how recognised is WPL? Well, over 5,300 employers and training institutions recognise the enhanced programme of Workplace Literacy and Numeracy (WPLN) credentials as an alternative recruitment and entry requirement to GCE N/O level qualifications, giving everyone the opportunity to improve themselves at any education level and age.

Unions in the past often took an aggressive approach towards making their demands, and with more conflict than cooperation happening at discussions with companies and the Government, unresolved issues were common and relationships were strained.

One such example was the Hock Lee bus riots in 1955, the year that older generations may remember as ‘Singapore’s blackest year of industrial unrest’ with at least 271 strikes recorded. The Hock Lee bus riots started brewing in late April and took a violently bloody turn on 12 May 1955, also known as Black Thursday.

Trouble began when workers from left-wing trade union, Singapore Bus Workers’ Union (SBWU), were dismissed by Hock Lee Amalgamated Bus Company as the management did not agree with the trade union’s militant methods in fighting for workers’ rights. The dismissed workers went on strike and were joined by supporters and Chinese middle school students. This crippled the city’s transport system, and eventually escalated into a riot that killed two police officers, a student, and an American press correspondent, leaving many more injured. You can read more here.

Nowadays, Singapore’s unions are no longer violent or combative. The tripartite framework, which supports cooperation between companies, unions, and the Government, brings the three parties to come to a consensus through collective agreements. Strikes are only sanctioned when absolutely necessary to come to a consensus, and only one legal strike has taken place since the tripartite agreement began — this was controlled to a peaceful picketing. Contrary to popular belief, strikes are not illegal in Singapore. In fact, the Ministry of Labour approved one in 1986; heard of the Hydril strike?

Aggressive unions are still seen in other countries, and they often disrupt daily life for citizens, something that is hardly seen in Singapore anymore! The role of trade unions in Singapore today are centered around promoting good industrial relations between workers and employers, instead of creating conflict and strife. Effective unions do not need strikes.

There’s nothing worse than not being there for your child, but it used to be a reality that fathers often had to miss the first few months of their child’s life for work. Mothers were granted maternity leave, but paternity leave was hardly heard of when tradition dictated that men work as a family’s breadwinner.

It was only in 2000 that Singaporean employers began offering paid paternity leave. Since then, it has increased from 3 days to 2 weeks, giving fathers more autonomy to be with their families at its most crucial moments. After all, work and family shouldn’t have to be trade-offs.

Before there was any regulation against workplace discrimination, companies were free to decide against hiring or promoting an employee based on attributes other than their work performance, such as age, race, gender, or religion. That made for unjust treatment for many workers.

It was only after the Tripartite Alliance for Fair Employment Practices (TAFEP) was set up that companies were held responsible for fair employment. Companies that have signed the pledge to abide by TAFEP must provide their employees with equal opportunities for development, and judge them based solely on their abilities and experience.

While workplace discrimination hasn’t been completely eradicated yet, TAFEP’s guidelines have helped create a framework where employees can report discrimination, and employers can work to keep it out of their companies, making Singapore a fairer place to work in since 50 years ago!

The labour movement has come so far since the struggles the working class faced in the 60’s, and so much has changed for the better for all of us today. Some people have wondered about the strong ties between unions and the Government, and a few have questioned why we have a labour chief in Cabinet — but why not?

It can benefit the unions and the workers by having a person of power and influence in the Government. And right in the Prime Minister’s Office, too. This can help ensure that workers’ voices are heard and represented during policy-making and major decision-making. Surely that is better than organising a strike to protest and to have our voices heard AFTER policies have been formulated?

Our unique brand of tripartism can help make pro-workers changes — like the seven we’ve discussed above — happen faster. In fact, Singapore’s labour movement is constantly working behind the scenes to make sure that many more changes will help Singapore workers get opportunities to improve their skills, while at the same time being able to be there for their family and loved ones.

Hopefully by SG100, we’ll have many more changes to be proud of.