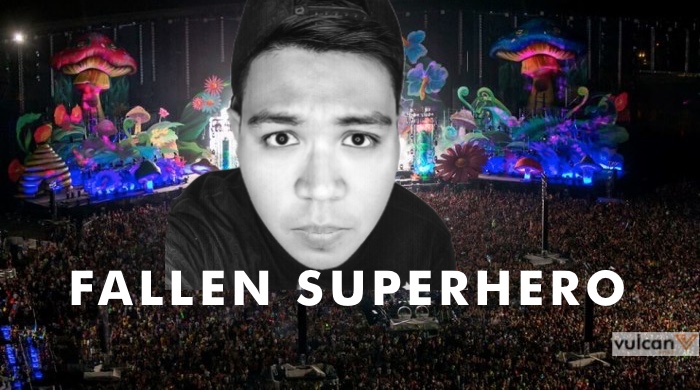 Mohamed Yahya has a day job, but in the bedroom, full-time job aside, he goes by the moniker of Fallen Superhero. You’ve probably heard of him via social media and/or YouTube because Fallen Superhero is somewhat a viral sensation in Singapore. He makes dance music — in his bedroom.

If you didn’t already know, Singapore has a rather vibrant dance music scene, which is why it’s no surprise that electronic dance music (EDM) gets quite the popular vote here. So while the bleeps and bloops of Fallen Superhero’s music may fit in the spectrum of EDM, listen closely. From the hypnotic chant of the tissue lady to the jarring jolt of closing MRT doors, he truly puts the ‘local’ in the music he does.

“My colleagues are aware of what I do on the side. I also collaborate with other local YouTubers from time to time but just on a small-scale, either providing music or even just acting in their videos,” Yahya says about his more exciting occupation.

He started producing music when he was in secondary school over 10 years ago, first experimenting with every sound he could find — from sound bites in video games, to simply ’surrounding sounds’. And everything, he adds, was self-taught. It was only in 2011 when Yam Ah Mee read the election results in the way that he did that Fallen Superhero began his localised mixes.

“Music has always been my passion so it was just a ‘for fun’ kind of thing that got a lot of attention. I don’t put out a track and tell myself “oh this must get 100k views”. There’s no real goal. If people listen and enjoy, then I believe I have achieved my goal,” he says modestly. To date, his videos can be seen shared all over social media platforms, and his YouTube channel has over 7 million views. Not bad for a bedroom musician with a full-time job!

Using just the music production software FL Studio from Image Line, a Digital Audio Workstation (DAW) and simple audio editor and recorder application Audacity, Yahya churns out his tunes. He says about making a song, “A lot of people don’t know this but for ALL my mixes, I use my own compositions as the accompanying track to the sound clips I use. Basically, every remix you hear is an original song by me. So the time taken can vary from a few hours (when I am inspired) to even months (we all have ‘writer’s block’ every once in a while).”

Though the music of Fallen Superhero is predominantly EDM, Yahya admits he listens to a range of genres, from the sub-genres of EDM like House, Trap, and Hardstyle, to those beyond the dance music spectrum like Punk, Metal…and the occasional K-Pop, which he is drawn to because of the catchy melodies and rifts.

Yahya begins to talk about the artists that have influenced him in his craft: DJ-Producers KSHMR who started out producing mainstream pop songs — Like A G6 is one of them — but is now doing his own brand of Middle Eastern-sounding EDM; and Headhunterz, who started out doing Hardstyle but is branching out into more genres. Just like them, Yahya’s always curious about new sounds and genres to bring the music of Fallen Superhero to new heights. “The point is, these guys are not afraid to try new things and face the wrath of their fans who accuse them of “selling out”. I think they are brave enough to explore and expand their artistic repertoire,” he states.

Yahya also gives props to the music landscape in Singapore, one that spans beyond the coop of nationalistic and patriotic little folk songs that get sung to death every year in the month of August. With the scene being small, collaborative work between artists is not uncommon, and he hopes to one day work on something with some of the acts he’s acquainted with like ShiGGa Shay and the Grizzle Grind Crew, The Sam Willows, and Gentle Bones.

Despite having been at it since he was in secondary school, he’s never performed live before despite being offered to do so. Still, he doesn’t rule it out and leaves it to when ‘the schedule permits’. For now, he’s looking to putting out his next track. “For some reason I get many requests to remix the sounds of marbles dropping. Another frequently requested one is the sound of our elevators!” he says. Looks like this is going to be interesting.

We talk about the bigger stage and explore the dream of Fallen Superhero playing for a big time dance festival. I ask him what he would play for his set. With a bunch of originals under his belt, it looks like Yahya was all set and well-prepared. He answers, “I’d probably play a lot of my own tracks and remixes, with a mix of more popular EDM tracks. I’d open my set with something original, maybe a remix of the Tissue Paper Auntie song?” Moniker or not, Yahya is far from being a fallen superhero.