M’sians Are Selling Nanoblock Toys On McD’s Facebook Page, And It’s Getting Out Of Hand 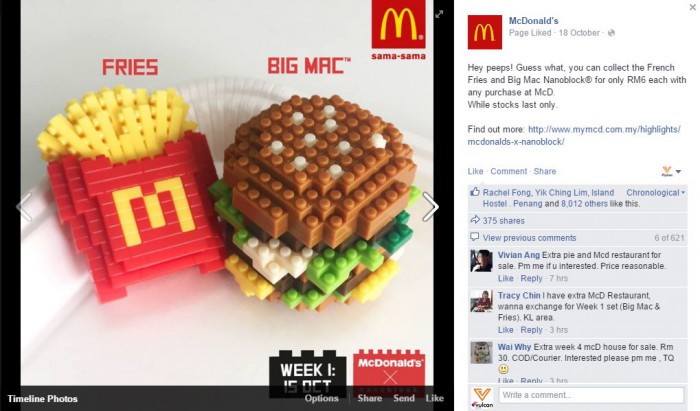 And eventually, just like what happened with the Happy Meal Despicable Me 2 toys promotions two years ago, McDonald’s fans went crazy just to get a hold of these adorable Nanoblock toys.

According to McDonald’s official site, these McDonald’s Food Icons x Nanoblock® toys are limited and these toys are strictly while stocks last only.

Similar to the previous McDonald’s minion madness, according to a report by Stomp from Singapore, many fans were lining up in long line, waiting to get their hands on the limited edition of Nanoblocks in a McDonald’s outlet in Ampang.

A quick tour to McDonald’s Facebook page, you will be able to see that their page’s comment sections have become an advertisement space. Malaysian McDonald’s fans have taken to their Facebook page to sell their Nanoblock toys. Almost every single post is flooded with various versions of “Interested please pm me.”

Malaysians love to make a quick buck of anything that’s in short supply, don’t they?

With a purchase of any McDonald’s food or drink, you can purchase the toys at RM6 for all designs except for the special McDonald’s Restaurant design which costs RM8.

Some genuine fans have posted the pictures of their toys on Facebook and other social media platforms to share their joy, while others are already selling them for profit via Facebook or e-commerce sites.

An eBay user is even selling his McDonald’s Restaurant Nanoblock toy for RM60, which is almost 8 times more than the original price.

Research made by the Journal of Positive Psychology shows that people who bought expensive products rather than experiential investments often devalued a new item’s worth directly after buying it. Generally, people know that life experiences will make them happier, but they still choose to spend money on material items because they think that they’re of greater value. But researchers found that their opinions changed after making the purchase.

These Nanoblock toys may be quite collection-worthy for McDonald’s fans, but let’s admit it, eventually they will most likely be left in the dust.