Alphaeus Tan Deserved A Cookie, And Oreo Gave Him A Bucketload Of It 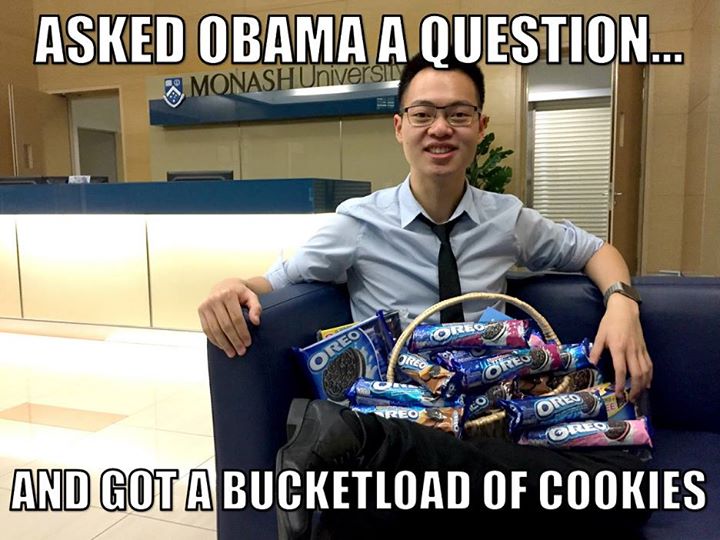 Remember Alphaeus Tan, the cool dude who not only owned a unique name, but also had the guts to ask the POTUS a very important question last Friday evening? Well, if you have not been on social media for the past week, here’s exactly what went down.

During the Asean Youth town hall meeting held at Taylor’s University Lakeside Campus, the invited guests were given a chance to ask President Barack Obama some questions and Alphaeus voiced out one particular question that nobody else dared to.

This was his exact question:

Talking about democracy and freedom of speech, Malaysia is currently embroiled in a political scandal and its frail justice system can bring no rights. Therefore, as thankful as I am for this, I would like to take this opportunity to ask you for your assistance in raising this issue to the Prime Minister of Malaysia and encourage transparency and independence of operations [at this point the audience starts applauding] of the Malaysian Anti-Corruption Commission, Public Accounts Committee, Bank Negara, and all media organisations. So, thank you.

President Barack Obama replied after a small pause, “I will do it”. Those were the four magic words that gave Alphaeus an instant social media fame. Many netizens who supported his action offered to give him a cookie (like the famous Obama meme), which prompted us to write this article.

“To give one a cookie” in meme terms means that the individual has said something important and hence deserves brownie points for having the courage to voice out his or her opinions. Well, it was not just the netizens who thought that Alphaeus deserved a cookie, because Oreo apparently did too. They not only awarded him with one cookie, but a whole bucketload of them.

When asked about how he felt after receiving the sweet gift by Oreo, Alphaeus was just overcome with joy and excitement because it was too good to be true. Due to this, he decided to donate the Oreo cookies to the House of Joy, a charity home which administers shelter, care and training to orphans.

His good deed will most definitely benefit the orphans and kids who would no doubt enjoy the sweet treats – not bad for a lad who just had an extra ounce of courage in him to make a request that was in the hearts of many Malaysians.

Also Read
My One Concern About Ride-Sharing Services, And What’s Being Done About It
Categories: Social Media User, Luminary, Entertainment, Malaysian