This Chip Charges Your Phone In 10 Minutes: We Speak To The Mastermind Behind It 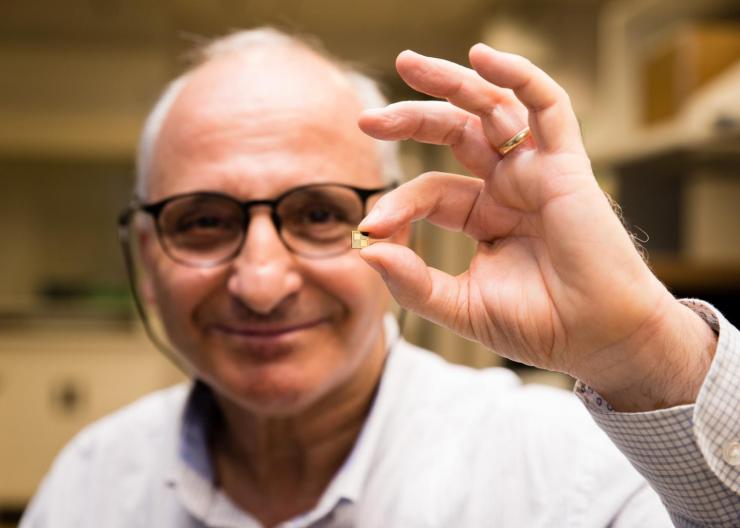 Last week, the news broke that Professor Rachid Yazami from Singapore’s Nanyang Technological University (NTU) had created a smart chip that could charge smartphones in as little as 10 minutes. The news has since taken the world by storm, with various international publications discussing the new invention. According to The Straits Times, Professor Yazami also revealed that tech giants like Samsung and Sony have expressed interest in his new creation.

If you haven’t yet heard about the smart chip, here’s how it works: by embedding the chip in a battery, it optimises the charging process so that batteries are recharged at an optimal rate. At the same time, it prevents overheating due to rapid charging, which means that batteries that contain the chip will be less likely to catch fire.

But smart chip aside, we thought it would be a good idea to speak to Professor Yazami himself, to pick his brain about how he came up with the idea for the chip, as well as what he thinks is the best invention ever (hint: his answer might not be very different from ours).

The Professor Behind The Smartphone Battery

To those of us not in the field of scientific research, Professor Yazami might be a foreign name. But his work is present in something we see everyday: the lithium-ion battery, which is commonly used in smartphones, laptops and gaming consoles. Professor Yazami shared that his main area of research, since 1978, has been in materials science for battery applications.

“I am on leave of absence from the French Government-owned CNRS [the National Centre for Scientific Research], where I hold a Research Director position since 1985,” he said. “I joined NTU in 2010 as Principal Scientist, Professor and Program Director at the Energy Research Institute and at the School of Materials Science and Engineering.”

The Problem With Batteries

The idea for the smart chip, Professor Yazami shared, came about as he found out more about the physical causes of batteries catching fire. He said, “Battery thermal events happen daily all around. Some with benign consequences, some with tragic ones. The most popularised events were those reported on the Boeing aircraft 787 or Dreamliner, where batteries caught fire in different places causing over 50 planes to be grounded for 4-5 months.”

Professor Yazami decided that something could be done to prevent further similar accidents. And this is what he’s done with the creation of his smart chip, which essentially works as a safety device that can be embedded in batteries themselves to detect anomalies that can trigger fire or explosions.

“The chip measures battery parameters such as current, voltage and temperature. A built-in microprocessor converts these data to entropy and enthalpy data. These data are then compared to some ‘standard’ ones taken from batteries at different risk levels and stored in the chip’s memory. Then a diagnosis becomes possible,” he explained.

At the same time, Professor Yazami and his team found that the data obtained via the chip could be used to help it charge faster: “The chip imbedded in the battery (the “entropimetric” chip) communicates with another chip imbedded in the charger (“adaptive” chip). The latter will run a charging program according to the battery state. The charging time may be reduced to 10 minutes if needed. This chip is multifunctional, addressing safety, state of charge, fast charge and life span.”

What Makes Good Technology & The Best Invention Ever

With every great new invention comes a slew of others rushing in to create copies of the original work to ride on its popularity. But it seems Professor Yazami is taking this in his stride, along with a healthy dose of humour.

“A good colleague of mine who won the Nobel Prize in Chemistry told me from his own entrepreneurial experience: “Rachid, you don’t have a technology if you aren’t sued by someone and if you don’t sue anyone”. I think he is right. So I expect to spend time and money to defend our IP rights in international courts since our patents have been filed in many countries.”

And despite the work ahead of him, Professor Yazami, at age 62, doesn’t seem to be ready to take things easy just yet; he’s well on his way towards completing his next project — refillable batteries.

As for his plans after that?

“I have a “reservoir” of technologies that still need to be developed but cannot because of lack of time. One of them is a rechargeable battery based on fluoride ion chemistry vs. current lithium ion. Another is on microbatteries based on nanosilicon and nanogermanium anode materials, which ultrafast charge in less than 10 seconds,” revealed Professor Yazami.

He might have lost us at “nanosilicon”, but speaking with Professor Yazami, it’s hard not to feel expectant and hopeful about the future of technology. Even through email, his enthusiasm came through, and made me wish I knew a bit more about the inner workings of the gadgets I use on a daily basis. But the reply that truly won us over came when we asked what he thought was the best invention ever. His response came in a single word: