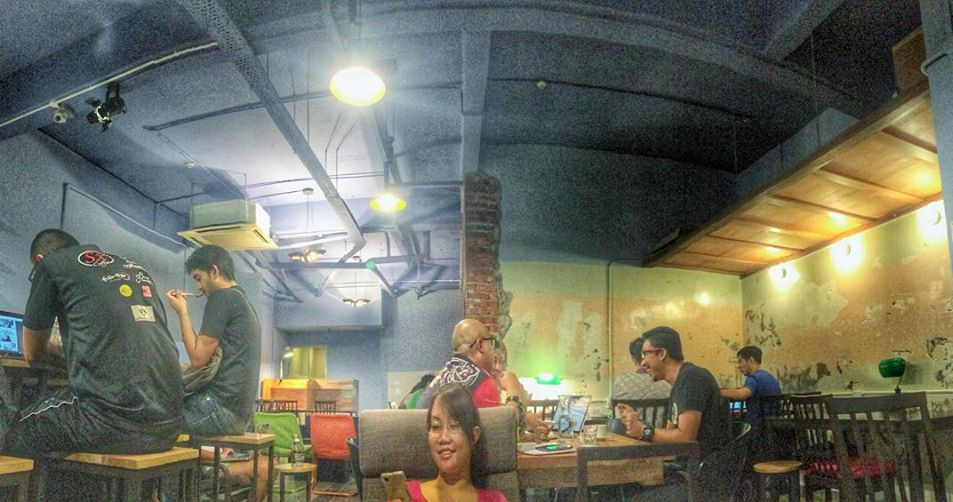 A few months ago, Yang Jerng created a poll on WebCamp KL, a Facebook group for techies to discuss and chat about all things web related. The post read, “I’ve got the opportunity to set up a café in Damansara Jaya… Say it’s 24-7, and has 100Mbps Internet wifi. What should I call it?”

Along with the post, he proposed a few names and others added in their suggestions, from which people could vote for the one that they thought would be the most befitting name for a café.

The name Sudo Brew was a clear winner with over 70 votes. The word ‘sudo’ originally meant ‘super user’ in Unix or Unix-like operating systems and it’s a command that allows a permitted user to execute a command as the superuser or another user. Those that are accustomed to using the Terminal on the Mac have probably used it numerous times without actually acknowledging it.

And thus, a café with the name ‘Sudo Brew’ was officially launched on the 13th of October.

Sudo All The Time

Sudo Brew is a specialty coffee shop that’s located at Damansara Jaya, where you can gather, chill and work. And if a decent Internet connection is pivotal to your work or your entertainment, then you don’t have to worry because Sudo Brew has you covered with a 50Mbps Internet connection.

The fact of the matter is there are numerous cafés around the vicinity where you could choose to hang out but there’s one key characteristic that sets this café apart from the rest—it’s 24 hours and has is equipped with extremely fast Internet connection speed. Basically if you’re awake at 3am and you want to work in a conducive environment that serves some strong coffee (cheapest one costs RM5), Sudo Brew is here to accommodate you. The café recently set up an aim to be open 24/7, 365 days a year, and their first day of being operational as a 24-hour café was on the 4th of December.

The café is segregated into several sections according to how much privacy one needs. For example, the tables at the front which is near the entrance to the café is less secluded, whereas the tables at the back provides more privacy and seems like a mini library where you can focus on your work without being distracted. Since it caters to professional nomads and people who like to work out of the office, the café is equipped with plenty of power sockets.

Jerng did explain that they had hoped to provide an Internet connection speed of 100Mbps, but due to the café’s location, they are unable to achieve such a speed, thus the current speed of 50Mbps (which is already quite a lot to shout about).

Coffee served in Sudo Brew is relatively affordable with a few options to choose from. The only issue that customers would face now is that of food. If you’ve been working there from morning, you essentially need to leave the café to go some other place to have your lunch, because they don’t serve food at the moment (other than a few light snacks and cup noodles). Chances are even if you do leave for a quick bite, you’ll find yourself heading back to the café because of the coffee, fast Internet and the ambience that’s great for work.

However, they already have a kitchen and they are currently are in the process of assembling it together and are in the midst of preparing a menu as well.

(If you’re a coder/programmer, you’d understand that reference.)

While I love the concept of Sudo Brew and it’s quite obvious that I will definitely frequent the place, the question still remains, is this something that is sustainable and will the café be able to make enough profit to survive?

After all, it’s not too hard to believe that young working adults will order just one cup of coffee and sit there the entire day leeching off the Internet speed.

Jerng feels that being operational 24/7 is an avenue that’s worth exploring. Given that they are inherently bringing in revenue on a daily basis, he took on the risk to raise costs as a way to experiment with the idea.

It’s a ‘fact’ that you will see written on the huge white board as soon as you enter the café.

However, he did say that if he finds that the being open 24/7 isn’t beneficial in any way, then they’ll just switch over to having just one shift—which might I add, is the sensible thing to do. Meanwhile, we can head over there to enjoy their services and drinks, and get some much needed work done.

Sudo Brew has partnered with Eat Drink KL and Uber to provide users with a promo code for a free Uber ride and free coffee. Use the promo code EDKLSUDO for a free ride to Sudo Brew and you can flash your Uber email receipt or trip history to the staff for a free specialty-grade Espresso (no minimum purchase required). To know more about the promo, you can click here.