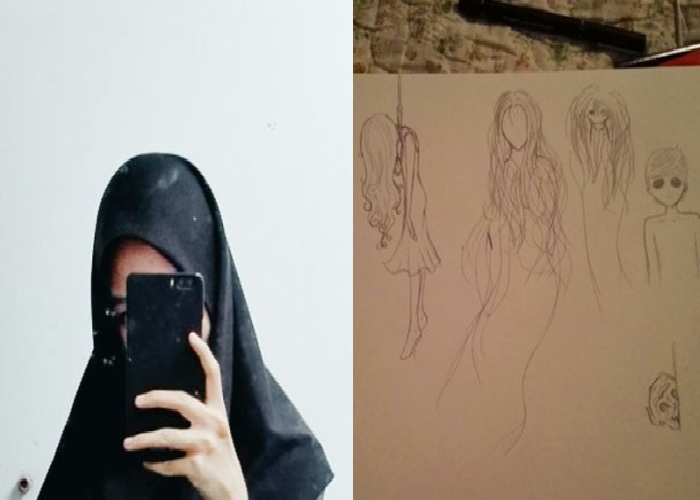 Paranormal activity seems to interest people, even when those same people are afraid of ghosts and odd creatures. Perhaps it is because everybody has a different interpretation to these figures and each ghost takes on a life of their own through every individual’s personal perception of it. One Malaysian girl recently went viral on Twitter when she posted up the rough sketches of the ghosts she sees.

The lass who goes by the Twitter handle, @amalinaahmd, has since made her social media account private but through her Tumblr account, it appears that Amalina, or better known as Mel, is just like every other girl. She reblogs images of fashion, makeup, food and lifestyle and there’s no ghost in sight on her Tumblr page. However, she did leave a virtual note, following her recent rise to fame on social media.

She mentioned that, “One night, I was so stress then I see the ghost in my room. So I decide to sketch it. Suddenly I remember all the faces (of) ghosts I saw some time ago. Then I sketched some of them that I always see.” After sharing the images on Twitter, she received plenty of mentions, retweets, likes and kept receiving questions about whether she could really see those figures and how she felt when she saw them.

Through this, she is thoroughly fatigued and wrote on Tumblr that if she couldn’t see the ghosts, she would not have been able to sketch them exactly like how they appeared. “If you’re in my shoe. You know how stressed I am.” She added that she did not even want to see these ghosts.

However, with this gift, she has been able to illustrate several images of characters which she has seen in places such as dorm rooms and on the streets. There’s the character with a bald head which she saw peeking from within an empty dorm room. A friendly ghost child which is reminiscent of the character Ju-On from the movie The Ring.

This is not the case with all of Mel’s drawings for some of them really do send chills down the spine, for instance her pontianak drawings. She said that she has seen two pontianaks, once in a dorm and sketched them out. A pontianak is a Malay and Indonesian folklore of a female vampire-like ghosts, and Mel was thankful that even though they were flying in the air, fortunately they did not let out a high-pitched screech. Following her encounter with the ghosts, Mel had a fever.

Though this Malaysian girl’s encounter with the paranormal activity may be eerie, it no doubt showcases her talent and attention to details, as most would have scurried off as quickly as they could, and would not have the guts to put them on paper. Perhaps then, Mel has the skills to bring what is dead, to “life” with her sketches and even those who are not interested in ghosts, can appreciate her pieces which are simple but chilling at the same time.