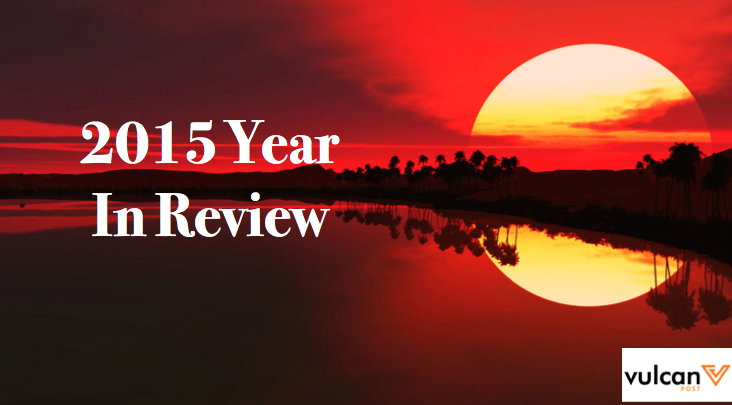 As the year comes to an end, all of us at Vulcan Post have nothing but appreciation for you, our readers, for supporting us in the past 1 year.

In 2015, we published a total of 2105 articles, which is an average of 175 stories per month. Growth has been amazing for us this year too:

If you have been following us throughout the year, you would have known that we organized 4 community meetups, 2 each in Singapore and Malaysia, as well as organized our inaugural Digital Publisher Summit earlier in September.

Thank you for an amazing 2015, and we hope you will continue to stick with us in the many years to come!

Our Malaysia team was the first to break the story of how Alphaeus Tan appealed to President Obama to raise the issue of transparency and corruption to Malaysia’s Prime Minister.

“Talking about democracy and freedom of speech, Malaysia is currently embroiled in a political scandal and its frail justice system can bring no rights. Therefore, as thankful as I am for this, I would like to take this opportunity to ask you for your assistance in raising this issue to the Prime Minister of Malaysia and encourage transparency and independence of operations [at this point the audience starts applauding] of the Malaysian Anti-Corruption Commission, Public Accounts Committee, Bank Negara, and all media organisations. So, thank you.”

Full Story Here: Everyone Wants To Give This Young Man A Cookie For What He Asked Obama To Tell Najib

This year was also the year the founding father of Singapore passed away. Before that happened, the team wrote an article highlighting some of the things we can all learn from the late Mr Lee Kuan Yew.

#2. Sometimes you need to make unpopular decisions to reach your goal.

Lee Kuan Yew has been known to take extreme measures to deal with Singapore’s future, but he’s done so only in order to bring Singapore from troubled times to the thriving metropolis it is today. And while some of his actions remain questionable to many, he stands by his actions, because they were what it took to build a nation.

“We would not have made the economic progress if we had not intervened on very personal matters. Who your neighbour is, how you live, the noise you make, how you spit or where you spit.” (Source)

3. How To Be Pro At Cat-Collecting Game Neko Atsume (Without Learning Japanese)

Neko became a global sensation because of one thing and one thing only – Cats.

When we wrote the article, it wasn’t meant to be viral, but to capture the google searches for tips and guides around this mobile app. And surely, we did.

Designed by Japanese games studio Hit-Point, let’s just say the mobile game is a cross between The Sims and Tamagotchi, and Taylor Swift collecting her friends. Players are given an empty backyard, and your job in this daunting game is to feed the cat with good food, keep them happy by buying and arranging cat toys to play with, and occasionally snapping pictures of them for their portfolio. Neko Atsume teaches us that we will never understand cats, and that’s okay. Also, the game is all in Japanese.

Read Full Article Here: How To Be Pro At Cat-Collecting Game Neko Atsume (Without Learning Japanese)

4. The Secret Of Chrome’s Little Dinosaur

By now, everyone would have known about this, and we were lucky to be the first few in Singapore to have found this secret easter egg by Google Chrome.

If you know Google well enough, you would know that they just love easter eggs. And surprisingly people still don’t really know this one when we wrote about it. While people are making jokes about how there’s a T-Rex because he has tiny arms that can’t ‘reach the webpage’ (ha ha), they’re missing out on the mini-game of a lifetime.

5. This Is How Singapore’s New Cabinet Looks Like After Being Peanutized

Earlier this year, the Singapore Government announced the new Cabinet lineup. Around the same time, Singaporeans were going crazy with the new Peanuts website, which allows you to “Peanutize” yourself into one of Charlie Brown’s friends.

So why not bring the two together?

Read Full Article Here: This Is How Singapore’s New Cabinet Looks Like After Being Peanutized

Thanks again and we will see you in 2016! Happy New Year everyone!