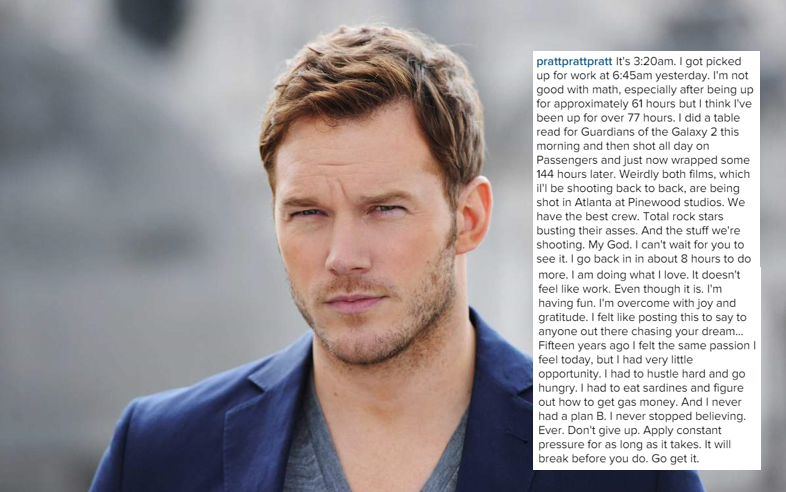 Many would associate Anna Faris’ husband, Chris Pratt with the movie the Guardians of the Galaxy. He plays the character of a space adventurer, Peter Quill. Chris is a well known figure in the Hollywood movie scene and for the right reasons, as he is a hard worker after all.

In fact, he relayed just how hard he is willing to work for his passion in a recent Instagram post. He had been up all night, and relayed the lengthy post after hours on end of no sleep.

In the post, Chris shared how he loves what he is doing, even despite the long hours of labour. “I am doing what I love. It doesn’t feel like work. Even though it is. I’m having fun. I’m overcome with joy and gratitude. I felt like posting this to say to anyone out there chasing your dream…,” the actor shared.

He loves acting, and it was evident with his post. It is true that when you are passionate about what you are doing, whether that means starting up something of your own, or acting in a big budget movie—it shows. The hours just seem to melt away, or rather, blend into a whole sequence of minutes; minutes which are spent doing exactly what you envisioned yourself doing for a long time.

“Fifteen years ago I felt the same passion I feel today, but I had very little opportunity. I had to hustle hard and go hungry. I had to eat sardines and figure out how to get gas money,” Chris wrote in the wee hours of the morning. It’s hard to imagine that he banks in big pay cheques now, but once found it hard to even pay for petrol.

That is the evidence of hard work. However, Chris never seemed to trade in his work for his family or his other passions. Yes, he works hard and his body of work is testament of that. However, he does not neglect his family either. On social media, he posts lovingly of his wife, and even of himself playfully serenading his followers on the piano.

In the world of entrepreneurship, it is easy to spend all of your hours on your startup. There’s something admirable about this level of passion, but what Chris was able to demonstrate even on his social media feed, is that there has to be a balance in everything that we do.

With that being said, ‘work hard’ is Chris’ underlying message. He shared, “I never stopped believing. Ever. Don’t give up. Apply constant pressure for as long as it takes. It will break before you do. Go get it.”

What is the one thing you’re aiming for in life—just do it, and “go get it”.