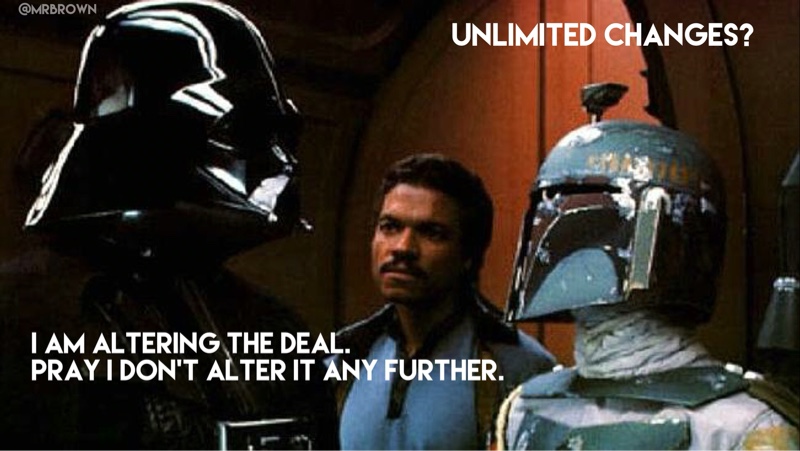 Over the past few days, the creative community in Singapore has been widely discussing the “unlimited changes” agenda. In case you haven’t been following, the Facebook post by a Singaporean designer which went viral, captured screenshots from a government tender which required that vendors to allow “unlimited changes” to the work done.

Here’s What We Know So Far

Who’s in charge of all the tenders – Ministry of Finance oversees GeBIZ, the government tender portal where companies log in and bid for tenders.

What was the tender about – The school had published the tender to request for a contractor to take up the designing and printing of its publications. The tender was published on GeBIZ on 1 February and closed on 11 February. The status of the tender states that it is pending award.

Is this the first time – Apparently not. The same tender with the “unlimited changes” clause was also called for back in 2014.

What the Ministry of Finance says about this – In a Facebook statement, MOF said that it has looked into the matter, and has verified that there indeed was such a requirement contained in the posted documents, sourced to a local school. MOF agrees that it is unfair to expect the suppliers to agree to unlimited changes.

The DesignSingapore Council, which is tasked to develop the local design sector, is also working with MOF to advise government agencies on the guideline of best practices for government procurement of design services.

What happened to the ITQ and its “unlimited changes” clause – This specification has been removed from the school’s Invitation-to-Quote (ITQ).

What the creative community says about it – According to a comment on the original Facebook post by Kelley, Tay Kheng Soon commented that These are retrograde procurement procedures emanating from a mindset based on street market practices inconsistent with an economy heading towards value creation. In such an economy intellectual and creative effort must be valued and respected if such effort is to grow. Those who continue street market practices should be re-educated. They have to see that their squeezing methods are counterproductive. In fact they are against new national interests!

The Bigger Issue At Hand

The creative industry is an important industry in Singapore – there are hundreds if not thousands of companies and professional freelancers in this sector. In the wake of this incident, it shines a necessary spotlight on the need of proper practices and tender standards. We spoke to Vivek Kumar, the Director of U Creative about this. U Creative, administered by NTUC membership team, is an online community of creative professionals in Singapore.

“Based on our interactions with the industry, this is neither an infrequent nor isolated case. From our experience, many creative service buyers can improve on clarity of requirements as well as being more reasonable on pitch expectations,” Vivek told Vulcan Post.

“We understand that such ill-informed practices are brought about not by malice in most cases, but by a lack of training on articulating the client needs for creative services. This appears as a gap in some of our creative sourcing processes in both public and private sectors, which must be addressed,” Vivek added.

“We strongly believe that the service buyer has a responsibility to design a brief which is mindful of both the client’s expectation and the creative effort to meet such expectations. This would also be in the interest of the service buyers in attracting good creative talent to meet their requirements.”

There is also a guideline for freelancers published in collaboration by the National Trades Union Congress and the Law Society of Singapore which addresses common issues such as how to resolve disputes between freelancers and hirers, third party claims and many others.

To help bring changes to the industry, U Creative has also taken the first step to contact IAS to put together a free workshop to educate parties involved in any procurement process. The workshop will be on how to write effective brief and tender documents that are fair to service providers, including professionals in creative and media industries.