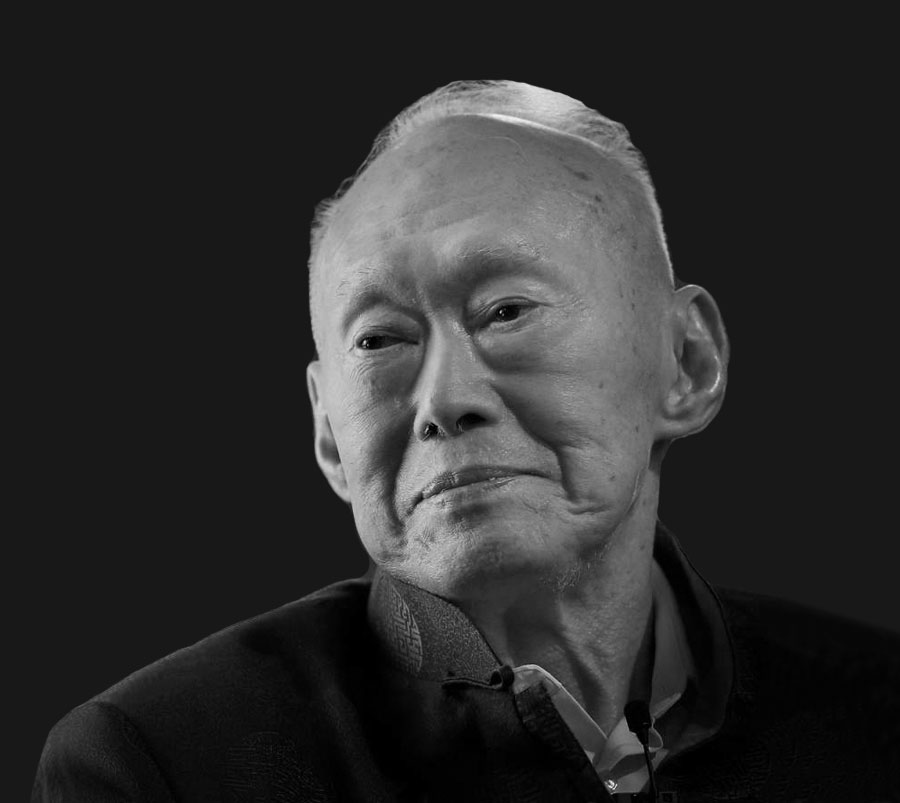 At the end of the day, what have I got? A successful Singapore. What have I given up? My life.

The Singapore we have today is his life's work, and his gift to all Singaporeans. Thank you Mr Lee Kuan Yew. Rest in Peace.

We may be a tiny country in Southeast Asia, but the world has heard of Singapore because of Lee Kuan Yew.

Each time I think about him now, I tear. Each time I read a tribute to him, I choke. It is difficult to describe in words, the grief I feel.

Today, the world has lost one of the great leaders of its time. He has inspired us all with his epic legacy – one we’ve taken more than a page from. His fearless determination and relentless pursuit of perfection will continue to inspire us, so that we may never cease to make waves in the world, just as he has. ‪#‎RememberLKY‬

The truth is, many of us won't be able to build our dreams without him.

You gave us a republic, Mr. Lee. No display of gratitude seems excessive in light of your tremendous legacy. But I’m happiest to report that your people – scattered and disparate as they may be – have indeed found poetry. In doing so, they may have uncovered the spirit of what it really means to be Singaporean at heart.

I never felt a loss as heavy as this. It is heart-wrenching to hear the passing of such a great man, without whom I won't be at where I am. Without his astuteness and leadership, this nation would not have existed. Without him, our country would probably remain backwater, trapped still in survival and overcoming obstacles common to many young start-up developing countries. Without him, many would not be able to enjoy the roof over their head.

I was deeply saddened to learn of the death of Singapore’s Minister Mentor, Lee Kuan Yew. On behalf of the American people, Michelle and I offer our deepest condolences to the Lee family and join the people of Singapore in mourning the loss of this remarkable man.

A visionary who led his country from Singapore’s independence in 1965 to build one of the most prosperous countries in the world today, he was a devoted public servant and a remarkable leader.

Prayers from Vietnam. Mr Lee Kuan Yew is loved not only Singapore but also all over the world. Everytime I walk on Singapore street, I think about my country and I always hope a leader like Mr Lee will come.

Laura and I are saddened by the death of Lee Kuan Yew. The father of today's Singapore transformed his country and helped usher the ASEAN region into the modern era. The Singapore he leaves behind is an influential force for stability and prosperity and a friend to the United States.

Singapore is what it is because of Mr Lee. We survived as a small nation and earned our place in the world because of him.

In the midst of political uncertainty and a call for change to Singapore’s governing structure, the People’s Action Party was formed. At an inaugural conference held at Victoria Memorial Hall, a place that reminded the 1,500 in attendance of their British leaders, Lee Kuan Yew became the PAP’s first Secretary General, a post he held until 1992.

At the landmark elections in 1955 that signified the beginnings of Singapore’s political autonomy, Lee Kuan Yew and his team won the Tanjong Pagar seat, making it his first political win in the country. From this day, Tanjong Pagar remains an important landmark in Lee’s political career, a reminder to Singaporeans of his dedication to the working class.

“I wanted to represent workers, wage earners and small traders, not wealthy merchants or landlords.” – Lee Kuan Yew, 1955 Lee remained a Tanjong Pagar GRC leader up until days before his death.

After several talks with the British government, a General election was held for a fully elected government. Led by Lee Kuan Yew, the PAP celebrated a landslide win, taking 43 of the 51 seats in the assembly.

That day, he became the first prime minister of a newly-independent Singapore, changing Singapore’s course of history forever.

After a mere two years, and much civil unrest, Lee signed a separation agreement to officially detach Singapore from the Federation of Malaysia. In a televised press conference held on what would be Singapore’s day of independence, Lee’s broke down in tears midway through his address to the nation, an iconic event that is forever etched in the memory of Singaporeans.

“Now Singapore shall be forever a sovereign democratic and independent nation, founded upon the principles of liberty and justice and ever seeking the welfare and happiness of the people in a most and just equal society." – Lee Kuan Yew, 1965

Lee Kuan Yew led Singapore through a time of great transformation, turning it from a small British port to the proud nation-state it is today. With his guidance, Singapore became the financial and manufacturing hub that rivals the world’s greats, overcoming its limitations in natural resources. His work earned him the title of “The Architect of Modern Singapore”.

“Whoever governs Singapore must have that iron in him. Or give it up. This is not a game of cards. This is your life and mine. I’ve spent a whole lifetime building this and as long as I’m in charge, nobody is going to knock it down.” – Lee Kuan Yew, 1980

Lee steps down as prime minister, handing over the position to his deputy, Goh Chok Tong. This made him the longest-serving Prime Minister, having held the position for 31 years. He stayed in the cabinet as Senior Minister, and later Minister Mentor, continuing to guide the PAP through the next two decades.

After the 2011 General Elections, Lee Kuan Yew officially steps down from his cabinet advisory role at age 88, leaving the PAP to run independently without his guidance. His political career officially ends after almost six decades, and he leaves his son, Lee Hsien Loong, to watch over his legacy.

“As long as you keep that, at the back of your mind, this place is what it is because of our effort. You cease to make that effort, you cease to be like this.” – Lee Kuan Yew, 2009

Despite his retirement from the cabinet, he continues his duty to Singapore, travelling often to improve Singapore’s standing on the world’s stage. During this time, he suffered from a declining health, partially due to a stroke-like condition that wore away his movements and speech. He continued to make public appearances until his hospitalization on 5 February, 2015.

'I have spent my life, so much of it, building up this country. There’s nothing more that I need to do. At the end of the day, what have I got? A successful Singapore. What have I given up? My life.' – Lee Kuan Yew, 2011