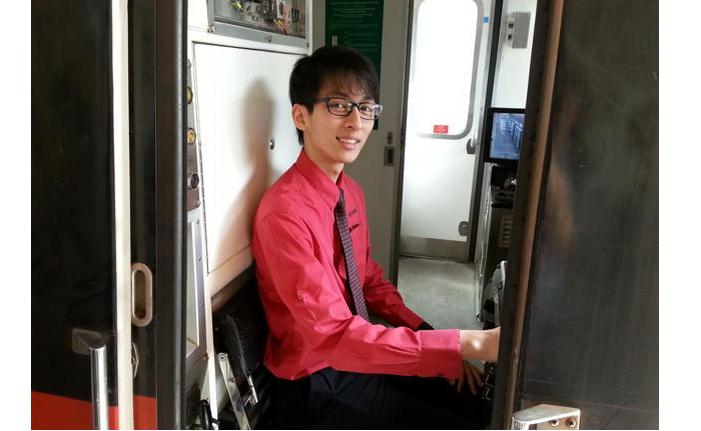 Waking up in the morning to go a way-too-early job can put even the most sunshiny person into a foul mood. However, Singaporean SMRT Captain Tan Ming Hui has been brightening the days for the commuters in his train with his inspirational words announced through the PA system.

Singaporean commuters have been pleasantly surprised to hear that the captain’s announcements over the past few weeks were fun-filled with inspirational phrases. The unassuming-looking young man is a Nanyang Polytechnic graduate who joined SMRT last September.

In a video that went viral on Yahoo News Singapore, he was recorded jokingly saying, “If you’re planning to leave anything behind, please make sure it’s something I can either use or sell. Otherwise, please remember to take all your belongings with you.”

Yahoo News Singapore reports that SMRT Corporate Information and Communications Vice President Patrick Nathan has responded to this positive reaction by saying, “Our Train Captain’s personal touch to his train announcements stem from our commitment to delivering the best care and comfort to our passengers, and we are very pleased that this has received positive public feedback.”

“We hope that he will keep up the good work, and we encourage all our Train Captains to go the extra mile, to bring smiles to all passengers who journey with us.”

“Since it’s a Thursday, what you do today will determine whether tomorrow will be a ‘thank goodness it’s Friday’ or ‘oh goodness, it’s Friday’,” Tan Ming Hui said in the video.

The captain said that his efforts did not go unnoticed, even before the video went viral. “Some passengers have come up to me and gave me the thumbs up after their ride,” he told Yahoo News, Singapore.

Also Read
The Internet Reacts To The Pirate Bay’s Sinking

However, some of the commenters were less than appreciative of his announcements. Commenter Ramakrishnan questioned if this was a staged-show by SMRT management, though he added, “If indeed the driver did that on his own violation, he should be honored in our SG50 and kudos to him.” Another commenter wondered what he would say to appease the passengers if the SMRT broke down.

However, most of the commenters commended him for his act, agreeing that this managed to put a smile on the passenger’s faces and personified the driver of the train instead of the usual drones.

One commenter, Tan, said, “SMRT please value all of your train captain and other staff who provide excellent service!”

Another said, “In the mornings, due to the crowd and the rushing, some passengers might not be in a good mood, but you certainly made them smile. Well done fellow (Singaporean). Who says we Singaporeans are not creative! I have not taken your train but I will certainly make an effort to take it just to hear you.”

Some of Ming Hui’s fans also seem quite taken by him, specifically by his good looks.

Have you heard this captain while taking the SMRT? Let us know what other fun gems he shared during your trip!

Forbes’ 30 Under 30: How these 4 NUS grads help SMEs improve labour productivity and cost