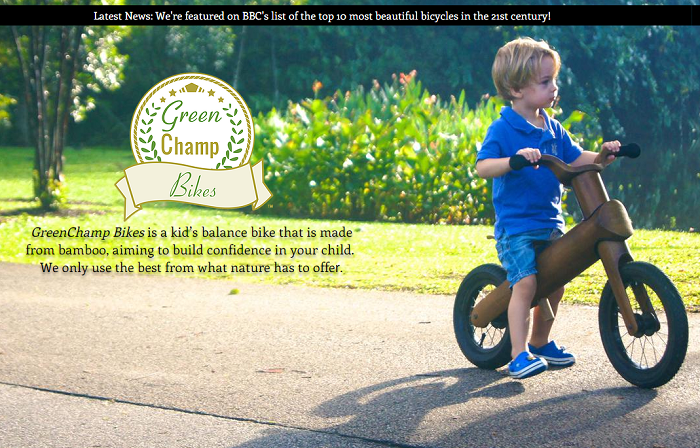 iBam looks like something crafted in the jungle. Simply slip your mobile phone with the phone speaker facing towards the back of the iBam, and this indigenous-looking gadget instantly amplifies your favourite tunes. If it looks like a cutout of a bamboo plant to you, that’s because this is exactly what iBam is made of. iBam claims that “our acoustic engineers discovered that the bamboo has a natural resonance to amplify music”. No charger? No worries! The iBam doesn’t need any, being carved from a grass plant and all.

Doing your own nails is therapeutic. However, it takes a lot of time to make a design that’s perfect. INNI Nails is a Kickstarter that allows customers to design their own nail stickers or select from the preexisting designs. Users can create designs using photos (either uploaded, or from the internet) and add whatever they wish via their INNI Nail Studio. INNI Paint even lets users design artwork akin to Photoshop.

This Kickstarter is an indication that people are willing to spend more on a good pair of time-telling gadget. The $30,000 crowdfunding project received tremendous support, with it reaching almost half of the aforementioned amount on the first day itself. Zelos Helmsman is made of either bronze or steel. The automatic watch does not need any batteries, since it is powered by kinetic energy. The face of the watch is made of scratch-resistant sapphire crystal while the watch itself can withstand up to 100m of water resistance.

The Kairos Mechanical Smartwatch is a truly ambitious project, blending automatic watches (powered by kinetic energy) and smartwatches. Kairos Watches, according to its description on the crowdfunding site, is the “world’s first and only mechanical smart watch hybrid”. The watch is infused with a Transparent Organic Light Emitting Diode (TOLED) display that projects a semi-transparent screen to project notifications. It offers the displays in two different levels of transparency.

100 Verses One Heart is just as romantic as it sounds. The project features, according to the Kickstarter, “a collective of 100 designers across to globe coming together to design their favorite verses, which would then be printed as postcards and packaged into 10.5x15cm inch hardcover art book in a box.” These meticulously designed postcards is actually still available for purchase on the developer’s site.

Gnome & Bow, founded in 2013, creates these bags that are able to retell stories based on their unique designs. The crowdfunding site shows the story behind the first collection of bags: The Hare & the Flying Tortoise I (As written by Gnome & Bow) that explained the design of the bag.

This crowdfunding project managed to get a funding of $37,561. If you’re interested in getting the bags, or anything else Gnome & Bow has to offer, take a look at their site.

The Perfect Sketchbook is the artist on-the-go’s answer to drawing on the road. The brains behind the Kickstarter project developed the project due the problem of not being able to get his hands of the perfect sketching: “One that should be hardbound, compact, binds well, opens flat, and filled with Artist Grade 100% cotton paper.” With this in mind, he approached sketchbook manufacturers and got in touch with a premium leather and paper lable in Singapore, Bynd Artisan. The collaboration brought us this Kickstarter.

This adorable-looking crowdfunding project has a noble cause. It is a book project to purchase children’s books covering topics such as adoption, interracial marriages, homosexual parenting and other non-traditional family units. The books will then be freely available on the shelves of the Pelangi Pride Center with the surpluses donated to a LGBT organization or charity.

Eileen Chao a national athlete in Gymnastics, Athletics and Springboard Diving from Singapore created this crowdfunding project on Pozible to fund her book that features the stories she’s learned through her journeys in life. She’s now working as a teacher and a violinist. The book will be accompanied by a song, “Enjoy the Ride” and managed to obtain twice the pledge required at $13,018.

This is a balance bicycle made out of bamboo, which sounds ridiculous, but is absolutely amazing. The site boasts that the bicycle “uses two specially developed technologies during production to ensure that our bikes are tough and hardy”. Apparently, honey is infused into the bamboo fiber to prevent cracking. The technology promises that the bicycle is absolutely sturdy and safe for children. According to its Kickstarter page, the co-founder Sunny “went on a solo expedition around the world that spanned 6,123km on his first handmade bamboo bicycle”.

This is the third (and last) watch that made it to our list of 15 successful crowdfunding projects and it is as unique as the first two. The sleek and minimalistic design is encased in a stainless steel case. The back of the watch shows the inner mechanism of the watch as it ticks onwards. This is a limited edition watch for the project on Kickstarter, with only 200 of each variants being produced while the special skeletal model (which allows users to see the mechanism on the front) has only 100 variants.

Keystone is the answer to misplaced keys and large dangles of tangled key rings and links. The keystone hold as many keys as you can stuff into it, which looks to be infinitely more keys than you would have. The keys have since been shipped out and reviewers on the Kickstarter page have been singing praises on their keystones.

Chiffon & Lumo is a transparent dock made from crystal glass with a Smart LED cable that charges your Apple phone with style. This Chiffon & Lumo project is inspired by chiffon cake, according to the Kickstarter page. “Sometimes when you look at it from a distance, you can’t see the Glass Dock, you only see your iPhone levitating in the Air with a beam of light sparkling beneath it,” the page states. The Kickstarter project managed to get five times of its pledge of $2,000 at $10,364.

14. Save The Substation Gallery

This is a unique crowdfunding project aiming to come up with the funds to save Singapore’s oldest independent contemporary arts center. The Substation needs the funding in order to pay for the building maintenance which amounts to $30,000. However, the crowdfunding project puts a humble funding pledge at $4,500 and managed to reach $6,206.

This Singapore-based crowdfunding project managed to get an incredible funding of $185,690 of their $40,000 goal. It is still taking pledges for those interested in getting their hands on what CreoPop boasts on the Indiegogo crowdfunding campain as “the world’s first 3D pen with cool ink”. The 3D pen uses photopolymers that does not require heating to function, which means it is absolutely safe for children. The ‘cool ink’ refers to the different types of inks available, including multiple colors, elastic ink, magnetic ink, glow-in-the-dark ink, temperature sensitive ink and body paint ink.