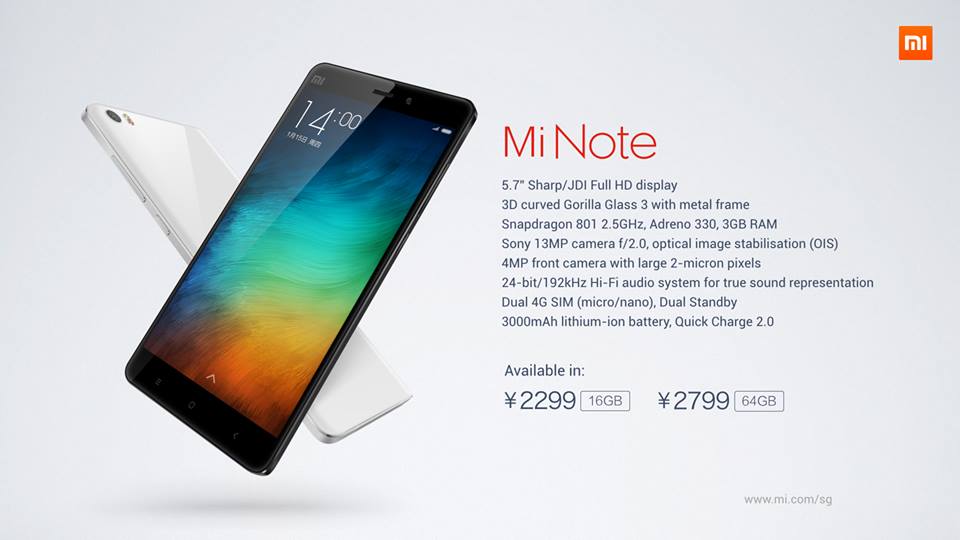 The secret is out: earlier today, Chinese phone maker Xiaomi revealed the Mi Note at their launch event in Beijing. The Mi Note will be their flagship phone of the year, and is set to rival the iPhone 6 Plus.

“The Mi Note is shorter, thinner and lighter than the iPhone,” Lei Jun, Chief Executive of Xiaomi said at today’s launch.

As Tech In Asia reported, the Mi Note will be a higher-end phone as compared to its predecessors. It will not only be lighter, but also thinner and ultimately more compact than the iPhone 6 Plus. With a 5.7 inch screen, it is slightly larger than the Redmi Note (5.5 inches), its phablet predecessor.

The Mi Note houses a 1920 x 1080 screen at 386 PPI, and there is an option to upgrade to a Mi Note Pro to get a stunning 2K HD screen, an unbelievable resolution. It also features a Sony 13MP camera with Optical Image Stabilisation (OIS). The front camera is a 4MP one with large 2-micron pixels.

The design of the Mi Note features 3D curved Gorilla Glass 3 with a sleek metal frame to give it a curved design that fits comfortably in your hand, and is supposedly scratch and shatterproof.

It will run on a Qualcomm Snapdragon 801, quad-core 2.5GHz processor, with 3GB of RAM.

Music lovers will be glad to note that the Mi Note includes a 24-bit/192kHz Hi-Fi audio system for true sound representation. The phone will also come with a dual 4G SIM (micro/nano) slot with dual standby feature.

It’s not known how much the Mi Note will cost when it arrives in Singapore in the second quarter of this year, but as a gauge, the 16GB model will be priced at US$370. That means that the Mi Note will retail for almost two-thirds less than the iPhone 6 Plus.

For those looking to up your screen’s resolution from 1080p HD to 2K HD, a Xiaomi Note Pro is also available, at US$530.