Important Dates That All Nintendo 3DS Fans Need To Know About 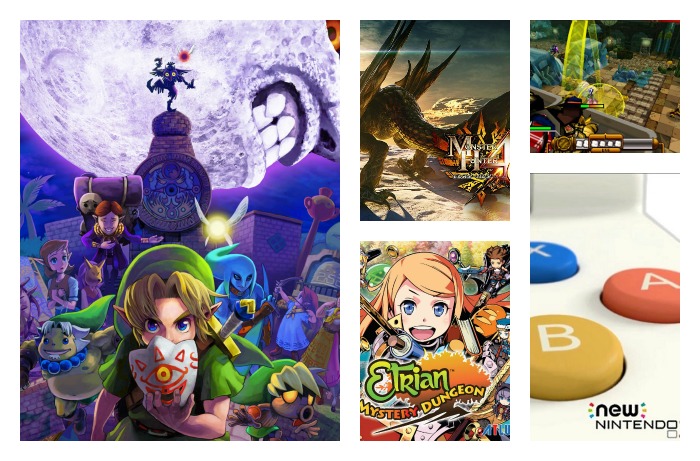 Scratch that. It is a great time to be a Nintendo 3DS gamer this 2015.

With so many Triple A titles coming to the Xbox One, PS4, and Wii U this year, the handhelds are not being left behind. Last year, the Nintendo 3DS had a neat offering — particularly in the last quarter of the year — with hit titles like Super Smash Bros, and of course, Pokemon Omega Ruby and Alpha Sapphire.

This year, Nintendo has already announced the official release dates for a bunch games for the handheld. We’ve got the indie hit Citizens of Earth this January, courtesy of Persona Q’s North American Publisher, Atlus. But that’s it for January. The biggest titles are coming to the Nintendo 3DS this February, and will continue to do so — all the way until May. So if you’re keeping an eye out for the big releases for the 3DS, here’s a list to help you out — in chronological order.

Announced late last year, the Legend of Zelda: Majora’s Mask 3D is a refreshing take on the old Nintendo classic, now polished brightly for the 3DS. By being radically different from past Zelda games, Majora’s Mask was both a hit and a miss when it was first released in 1999. Decades later, Majora’s Mask was able to establish a cult following. With this Nintendo 3DS remake, the company is tapping into nostalgia, and I’m sure the young-adult demographic will enjoy it as much as they did before.

Also coming on the same day as Majora’s Mask is Monster Hunter 4 Ultimate. Capcom described it as a game localized to perfection. I cannot actually believe that this game has more text than Ace Attorney, a visual novel game from the same company. But perhaps with more text — and new quests, and hundreds of items to pick up — the hunter in you will be satisfied.

Games aside, February is also an important month for Nintendo gamers as the company will finally release the NEW Nintendo 3DS outside Japan. Just as how Apple released the iPhone 5S after the iPhone 5, the New Nintendo 3DS is an upgrade of the original Nintendo 3DS, with improved graphics, additional buttons, better battery life, and super stable 3D. See this for a full list of improvements from the original system.

There are two versions of the NEW Nintendo 3DS: the regular size, and the New Nintendo 3DS XL. Europe will get the regular and the XL versions, while North America will only get the XL.

Since Asia is following the US release, gamers in Singapore, Malaysia, the Philippines, and elsewhere in SEA will probably just get the New Nintendo 3DS XL. It also does not come with a charger; the company probably assumed you already have one, but we’re not complaining since it will reduce the cost of the system.

And yes, the ‘NEW’ is simply affixed onto the name, just like the NEW iPad, the official marketing name of  the iPad 3.

Think of Abraham Lincoln. Now think of Aliens. Code Name S.T.E.A.M seems to be a realization of Giorgio Tsoukalos‘ dream of convincing everyone that aliens exist! For starters, it is about an alien invasion in the 19th century, with Lincoln himself founding the team that will defeat it.

Secondly, it is a strategy RPG. If you have played games like Disgaea, Final Fantasy Tactics, or Fire Emblem before, then Code Name S.T.E.A.M is just like that: you move your units one by one on a grid map and after your turn, the enemies move theirs.

What’s different is that on S.T.E.A.M, you cannot see an overview of the map. Since you are viewing the game from a second-person perspective instead of a top down perspective, you have to imagine how the map is designed, by switching from one character to the next, making it especially tricky.

With this novelty, Nintendo is probably luring the Fire Emblem fans back by creating a refreshing take on the strategy genre classic that has a map viewable from the start.

When a game features a pretty boy teenager searching for a sword to defend his open world-designed homeland from robotic creatures that threatens it, what you get is a resurgence in interest in the JRPG-genre.

The original Xenoblade Chronicles for the Wii was a hit in Japan but was missed almost everywhere else. No one was interested in publishing a niche Japanese roleplaying game for the Wii, which, at that time, was nearing the end of its shelf life in North America.

It took a group of extremely dedicated fans to campaign, raise awareness, and plead Nintendo to release it. The company did eventually, to unexpected sales. The game was said to be influential in bringing the JRPG genre into the 21st century, outclassing its peers.

Coming out this April, Xenoblade Chronicles 3D is exclusively for the New Nintendo 3DS. You cannot play it on the regular Nintendo 3DS. You need to keep that in mind, and hopefully your import retailer will tell you that before purchasing.

Story of Seasons, Hatsune Miku and More Coming Out Before June

I mentioned 4 high-profile games coming out starting this February, along with the New Nintendo 3DS. If you don’t like Zelda, however, and are more into third-party games on the handheld, the 3DS still has lots to offer.

This March, Harvest Moon returns to its farming roots with Story of Seasons (3/10). Get this: it is Harvest Moon, albeit with complicated trademark issues.

Since the trademark is owned by the previous publisher (Natsume), the current publisher (Xseed) — which is a subsidiary of the game’s Japanese developer (Marvelous) — cannot use the iconic name. In all fairness with regards to this trademark issue, Story of Seasons remains as strong as any other Harvest Moon title in the past. From customizing characters to the global crop trading, the series will be in its most connected iteration yet.

Hatsune Miku, the virtual idol who dazzled David Letterman is also finally coming to the Nintendo 3DS through Hatsune Miku: Project Mirai DX (26 May), for the enjoyment of those who love music simulation games.

Finally, Atlus is ending the first half of the year with an updated version of Shin Megami Tensei: Devil Survivor 2: Record Breaker (1st half 2015), which I’m personally looking forward to.

A word on Asian releases

Nevertheless, since Asian 3DS systems are compatible with North American software, we can all safely assume that the release dates of these games in Asia will be near the NA release date. Of course, it is best to check out your local retailer.

What other games are you looking forward to this year?