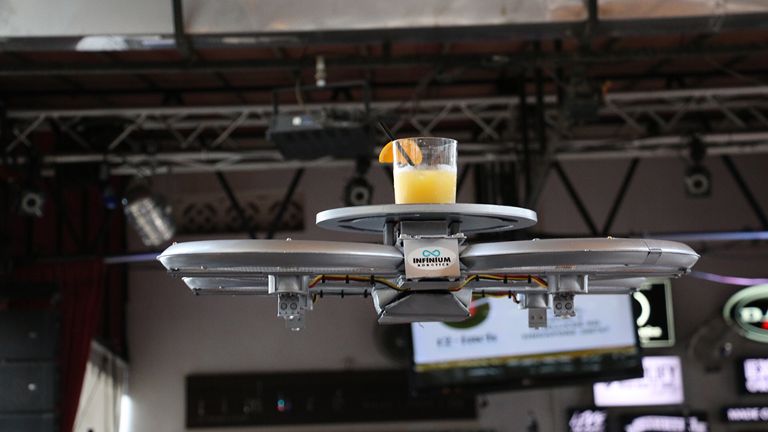 The future is here, as Timbre showcased the new drone waiters that will help deliver food to customers.

The drones were first seen at last year’s productivity month, where they delivered food to Singapore’s PM Lee.  Yesterday, Timbre gave a sneak peek to members of the media, showing off the capabilites of the drone waiters that will join the Timbre service team.

The drones were made by Infinium Robotics, and are called the Infinium-Serve. They’re installed with infrared sensors to avoid oncoming obstacles and humans, and have swarming capabilities as well. This means that they will be able to fly in multiple formations without colliding.

Timbre Group’s Managing Director, Edward Chia, explained to Channel Newsasia that the time saved by drone waiters would benefit Timbre, as this would free up waiters to concentrate on taking orders and requests from customers. With the addition of the drone waiters, Timbre Group’s position as one of the most advanced restaurant chains in Singapore will be cemented — they were one of the first chains to fully adopt an e-menu system, too.

Infinium Robotics’ Chief Executive Officer, Woon Junyang, also said to Channel NewsAsia: “This will result in an enhanced dining experience which will eventually lead to increased sales revenue for the restaurants as well as heightened morale of the staff.”

However, it seems the drone waiters do have some room for improvement, with their makers saying that they are working on producing a quieter model, as well as one that could unload dishes or clear tables without human intervention. Currently, the drones can only land on a separate table, while waiters manually unload the dishes and serve them to customers.

The demonstration also showed the massive drone serving one dish at a time — a less-than-desirable scenario during peak hours in a packed restaurant.

The drones will eventually be rolled out to Timbre’s five venues in Singapore, and we should see the first drones take flight in at least one venue by the end of this year. According to Infinium Robotics (via CNA), the project costs a “low seven-figure sum”, a costly sum for a new project.