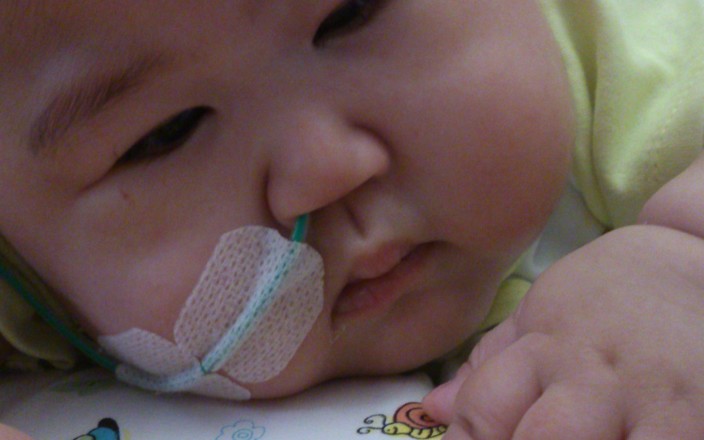 It started when they were told that their baby couldn’t eat. Due to a rare birth defect, little baby Yujia was born with her esophagus not connected to her stomach, leaving her unable to consume food normally. What’s needed to help her do so is an operation done in Boston, the US, which will cost around US$1.3 million — something that her parents can’t afford on their own.

So they turned to crowdfunding.

Since they started their Indiegogo and Facebook pages, Singaporeans have begun backing Yujia in the hopes of sending the little baby for her much needed surgery. In one week, the Indiegogo page has raised almost $50K, and gotten the attention of the local press. GiveAsia has even helped by starting a campaign page there, raising double the amount in a mere 3 days.

Raising almost $150K in a week is a great feat, but Yujia still has a long way to go before they reach their goal of $1.3 million.

While more than a thousand people have shown their support for this cause, many are still uncertain about the nature of crowdfunding for a personal cause. Forumers on HardwareZone have raised concerns about asking for donations blatantly on the Internet. While some have commented that “nowadays everything can also ask for donation”, others have skeptically asked, “Can I ask for donation if my parents fall sick? If I fall sick? If my children fall sick?”

It’s no surprise that many Singaporeans would feel disconcerted over the idea of asking for donations. After all, talking about one’s family’s financial situation is a taboo topic for Asians, and many feel uncomfortable expressing their need for financial help, especially on a public platform like the Internet.

Others on Facebook have also raised the concern that the financial background of Yujia’s parents are unclear, and many questioned why they resorted to what seems a desperate measure when many other outlets are available. As one commenter on Facebook raised: “Not against helping the baby, but some info on the family background and financial situation can help others have a better understanding.”

Despite the discomfort, though, crowdfunding for personal causes has become commonplace in the crowdfunding community. Late last year, Indiegogo launched their dedicated personal fundraising service, Indiegogo Life, supporting personal causes from medical to educational, and even volunteerism. It’s not surprising that Saving Yujia is among one of the most active campaigns lists, amongst many other medical campaigns from Leukemia battles to rebuilding homes in Nepal.

Local website GiveAsia is also the new go-to place for personal crowdfunding causes. A campaign launched on GiveAsia to help support the family of the late TKPS teacher Mohammad Ghazi has successfully closed, having raised more than $43,000 in 24 hours. The platform has proved even more helpful towards Yujia’s cause, having raised double the amount on Indiegogo in half the amount of time.

With so many personal campaigns out there, one question many of us have is how we should judge if causes are with backing — or not. While campaigns like Yujia’s are swiftly taking off, others aren’t doing as well: last year, a university student’s bid to raise funds to attend an Ivy League college for further education was met with disdain, leading him to take down his campaign to pursue other methods. It’s strange to think that we consider ourselves in a position to judge people’s problems, when asking for help is just that — asking — and should be met without judgement or criticism.

Nonetheless, Yujia’s supporters are still coming in droves to help one little girl, and with a little less than two months left, Yujia’s lofty $1.3million goal may possibly be within reach.

If you’d like to support Yujia, you can do so through Indiegogo or GiveAsia.