Confession of a Taiwanese: Are we spending too much time queuing up? 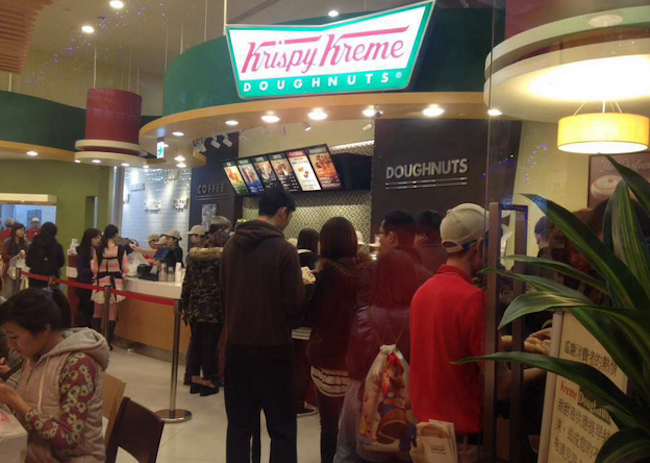 Thanks to its extensive advertising and marketing gimmick which includes free donut up to a whole year, thousands of customers flock to the store everyday ever since its grand opening at the center of XinYi District in Taipei City – where most high-end shopping malls, financial buildings as well as landmark building Taipei 101 are located.

Even two weeks after the launch of Krispy Kreme’s flagship store in Taipei, long waiting lines which extend several blocks from one shopping mall to another is still a common site at the XinYi District.

Attempt at getting my hand on the donuts

Wandering around XinYi district after lunch with my friend one day, we decided to pay the new outlet a visit since it was only a few minutes walk away.

I remembered it was drizzling.

We arrived at the bright and cheerful outlet, only to find out that there is a long queue extending from the outlet to the block next door. We asked the waitress at Krispy Kreme how long do we have to wait if we were to join the queue, but she answered: “Sorry, I am not sure.”

We decided to come back and try out luck a bit later.

Three hours later when we went back, 3.30pm to be exact, the line was still long, and we had to give up. Another friend of mine attempted to make the expedition before its opening hours at 10:30am, but gave up too because there was already a long queue even as early at 9.30am in the morning.

News feeds on my Facebook page showed real accounts of people who actually have waited in line until they have their dream donuts at hand – usually each customer would buy at least one box  of 12 donuts.

I can’t help but wonder, “Where do all these people come from? Don’t they need to work or something?”

Walking pass the crowd, which consists primarily of young people, I observed a mix of boredom and excitement on their faces. Holding umbrellas and shivering in the cold rain, they are determined to get their hands on the Krispy Kreme donuts.

It occurred to me that the same scenario happened as well for the launch of popular apparel brands Uniqlo and Zara in Taiwan. When Uniqlo launched their first shop in Taipei back in 2010, and Zara in 2011, long queues were also formed in front of the stores, and people had to wait for at least half an hour to shop for clothes.

Come 2014, US apparel retailer GAP and Sweden’s H&M will also arrive at the shores of Taiwan. Prior to the launch, both these retailers have launched massive marketing campaign to build up the publicity for its impending launch. We definitely expect similar responses from fashion enthusiasts in Taiwan.

We Taiwanese have always teased ourselves for having too much time, as well as having a thing for joining in a long queues to be part of the next big thing. The truth is, people on this island, or maybe just in Taipei City, have always embraced exotic fashion and savvy gadgets from countries such as Korea, Japan and the western world. As long as it is cool and fun, we would welcome them with a big hand.

Maybe the next time before we spend time in long queues embracing a new brand, we should wait for the fever to die off a bit, or get some opinions from those who have tried it and see if they are actually worth the wait.

Few days later after I gave up joining the queue for Krispy Kreme donuts, I asked someone for comments on how they tasted.

Also read: To be or not to be a housewife – the modern Asian woman’s dilemma

This is part of our Vulcan Post Saturday Column, where we write about thought that matters.

Elon Musk and Twitter have gotten on a bad start, but he is the saviour Twitter needs