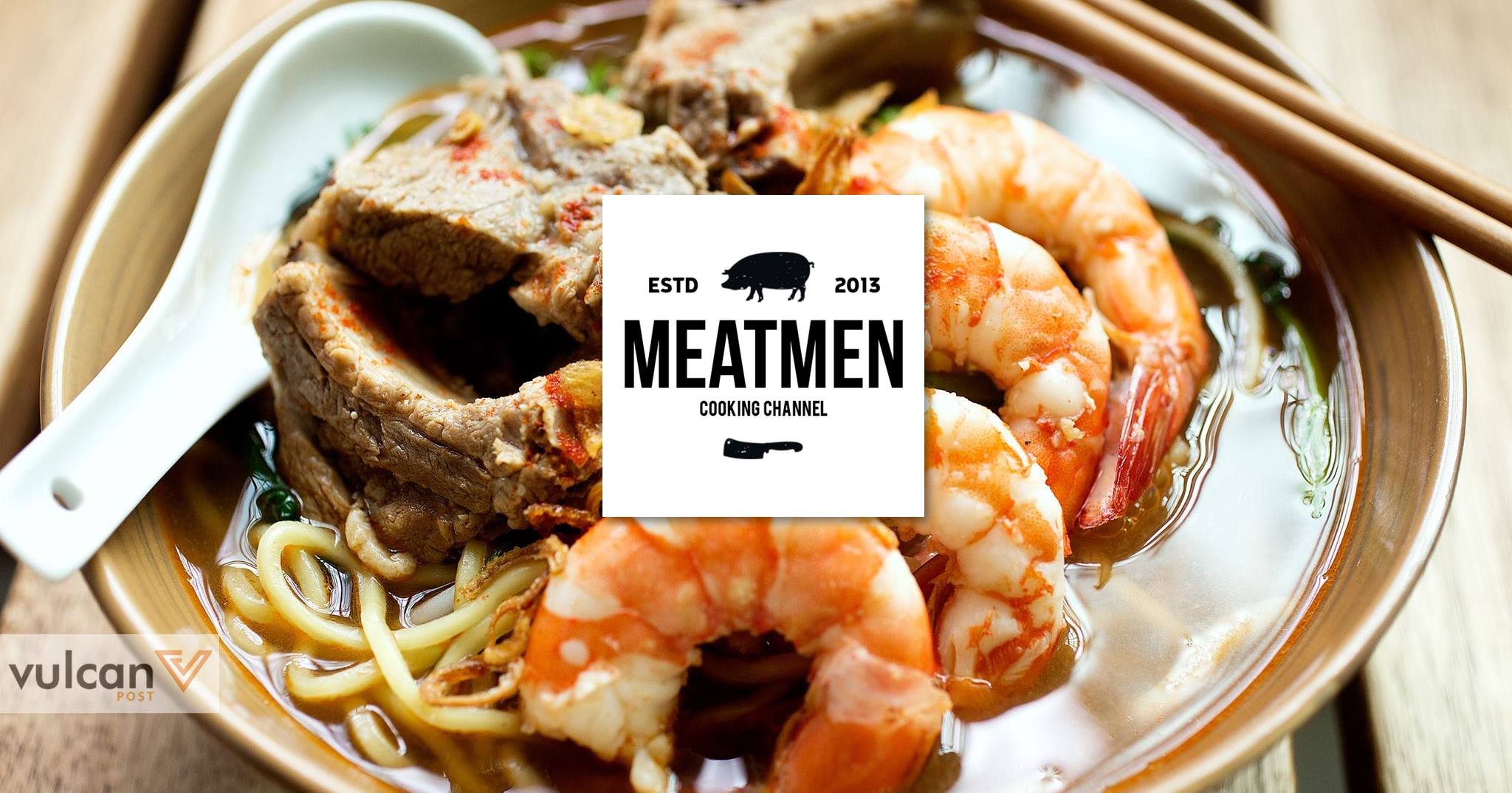 Food is a universal language. The crackling of pork skin, the sizzle in a pan, the smell of freshly-baked bread — everyone understands and relates to food. This fact is exemplified amongst everyday Singaporeans, where talk of chicken rice, lor mee, or nasi lemak can make our mouths water wherever we are.

And if cooking shows and food blogs are anything to go on, watching food being cooked will always be king in media. The MeatMen, a Facebook page filled with pictures, recipes, and videos of Singaporean food being cooked is a prime example of this. With a strong local twist, The MeatMen beautifully film themselves (or their hands) making local delicacies from start to finish, which is enough to make your stomach groan in anticipation.

Just look at it!

So who are these creators of gorgeous food? On their website, they describe themselves as “a bunch of greedy guys in the creative trade who love their food”. But to be more specific, they’re JJ, Yingda, Chris, and Jonathan, four friends who love their food and have an eye for the artistic. Jonathan, for example, is a student with a passion for photography, JJ is an art director at a post production studio, Yingda is an art director in a digital consultancy, while Chris is a digital consultant. Some of them (though they didn’t specify who) also come from a hawker background. Talk about a killer team.

The page, labelled on Facebook as a personal blog, has gone beyond that. With over 84K followers on Facebook and 14K on YouTube, their success has brought their love for food to new heights.

So what happens behind the scenes of every video? Well, they will do extensive research, looking for recipes off the Web and cookbooks. They will then test them out and combine aspects from different recipes to create a recipe to their liking. But if they film the process of cooking something, and the end-product doesn’t taste satisfactory, they will redo and improve on it until the taste is just right.

And after the filming is done and the photographs are taken? Eat, of course!

“We don’t just shoot for the camera,” they said in an email interview with Vulcan Post. “Our process is Cook. Shoot. Eat. Repeat.”

And when asked what their favourite recipe is? The Siok Bak — a full 4kg slab of meaty goodness all caught on camera.

“It tasted so good fresh off the oven that we decided to pop a few beers and finished the whole 4kg we made, and still remade another batch the next day (Yes it was that good!).”

We don’t blame them.

While most video-creators tend to choose video-sharing platforms like YouTube, The MeatMen seem to thrive on Facebook. Perhaps a big factor influencing their choice to host this project on Facebook from the beginning is that The MeatMen, despite being wildly popular, doesn’t focus on making money at all.

“We started our presence on Facebook groups, then moved on to a Page to share photos and videos. It was only so much later that we added the videos to YouTube due to fans’ requests, also in hope to reach more viewers.”

Their Facebook page has quickly become a community for food-lovers to ask questions and share tips on how to cook their favourite delicacies. The barrier to cooking seemingly-complex dishes like braised duck, kong bak pau, and mee siam have been lowered, and followers appear to be pulling up their sleeves to make something great.

While it’s currently just a hobby for them, the guys hint that they are planning something big for The MeatMen, which may soon become a full time gig for the team. This may mean an actual revenue plan for a project that was started with no commercial aspect in mind.

“We’re humbled by our success online. To us, this is simply our way of sharing and encouraging people to cook. We don’t have a host talking about the dishes in our videos because it’s our strict belief that the food and ingredients are the stars, not us.”

It’s heartening to see that the guys behind the channel, at the end of the day, are just regular bros having fun with food. And despite their 84K followers, they’re just a bunch of friends who love food and have their special quirks, like the fact that Yingda actually loves McDonald’s, or that Chris is secretly happy about going bald. You can go to their Facebook page and ask them about it there, but you’ll probably just leave with a growling stomach and an insatiable need to snack.