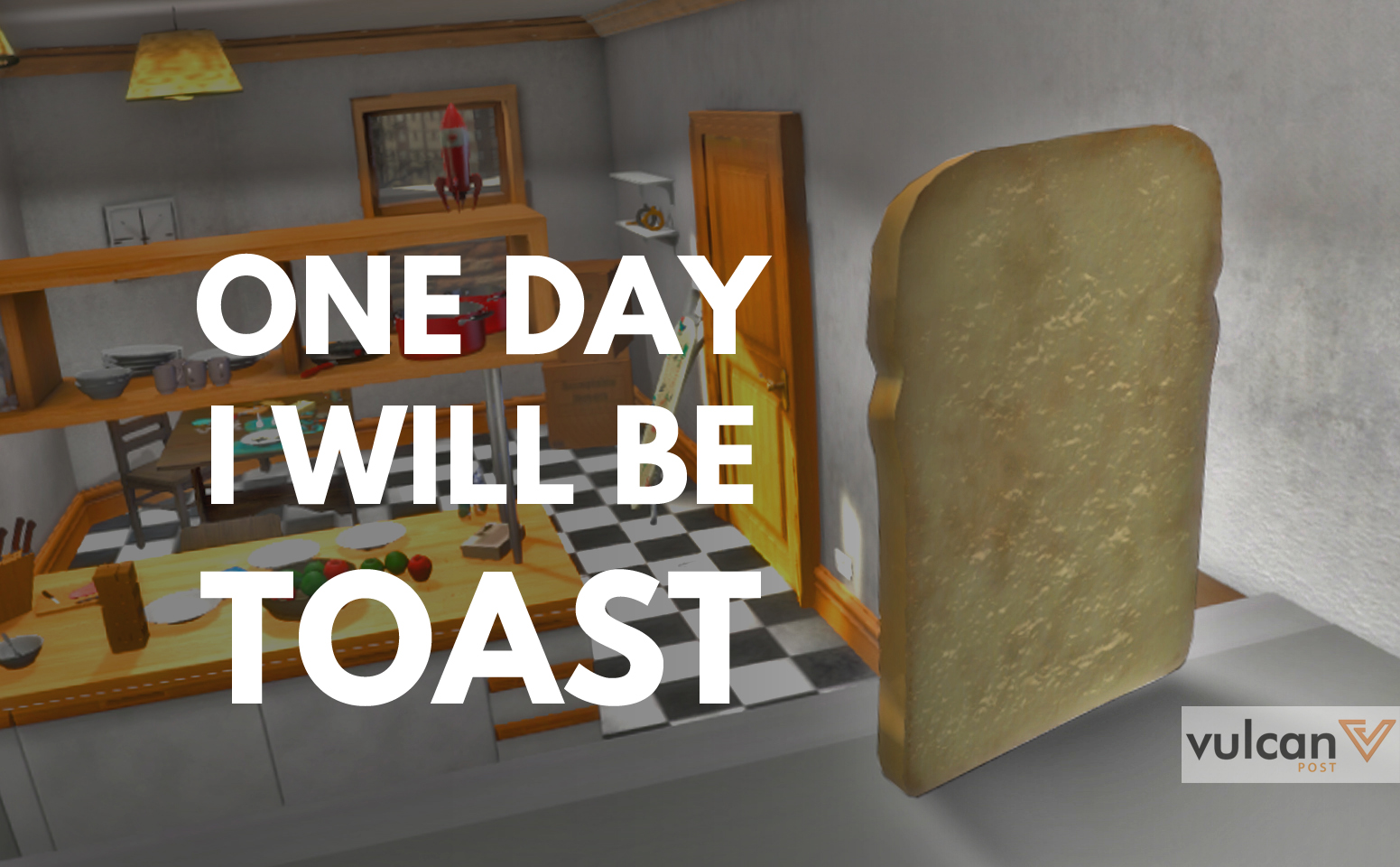 I’ve played simulation games before, so I didn’t bat an eyelid when I heard of a game that would require me to play as a piece of bread. When I saw it in the App Store, curiosity got hold of me and I decided to try it, though the game costs a whopping $5.98. Yes, I’m one of those crazy people that would pay for an app.

Don’t get me wrong, I Am Bread is a very clever game. The main aim, at each level, is to move a slice of bread (yourself) from wherever you are into the toaster, and literally turn yourself into toast. With great graphics and an amazing dexterity that could only be chalked up to developers with a keen understanding of physics, the controls behind moving the bread make it seem like a chunky, latex-elastic, weighted piece of…something.

It can be controlled via its four corners to climb walls like Spiderman, flop over anything, and travel long distances. This is key to making this game work at all, and I honestly can’t think of any other point of reference that developers would have to simulate a piece of bread not acting like a piece of bread. Nothing flops around like that.

The issue — and I sound like just a nancy for saying this — is how @$!@# difficult this game is. In the first level, for example, you have to navigate a kitchen. The problem with this is that the bread has an inherent shifting weight, which moves about depending on the things you come into contact with. You also have no control over which corner you are utilising (think of each corner as a limb) — the only corners being used are the ones which appear in little blinking circles.

And through all these kinetic challenges, you still have to keep in mind that you are, in fact, a piece of bread. A meter of edibility stays at the top of the page, taunting you and reminding you that you have a level of purity to uphold. It’s hard enough to move around without a constant “the floor is lava” mentality hovering over you. And why is this bread picking up lint and fishbones like a dirt magnet?

By the time I reach the damn toaster, I have already been through hell, fallen on the floor, kitty litter, fish bones, jam, water — and I’m gritting my teeth and grazing my already raw fingers to try to get into the tiny little slot in the toaster. And as I’m subtly flopping up and down around the top of the toaster, I fall, helplessly, onto the floor. My edibility level plunges to zero, and the game gives me an F for effort. By then, I had lost count of the number of times I had tried to become toast, but failed. My self esteem plunges. What is my purpose in life, if not to become toast?!

As a rule, if it takes me a day to not complete a game, I will not play it. (I eventually completed it in two.)

But if you happen to want to try to play the most annoying iOS game around since Flappy Bird, then here are some quick tips on how to get as far as possible.

Take time to line yourself up

The worst, most time-consuming thing that you can do is to try to rush through the game as fast as possible, while the most time-saving way to get through the game is to take your time to line yourself up. The controls for the game aren’t the easiest to use, so taking a few extra moments to execute specific actions will help you feel like you have some sort of control. It won’t keep you from wanting to tear your hair out of your scalp though.

With swipes, you can help make Bread make big moves and gestures. However, nudges can be the best way to make subtle tweaks and align yourself. Nudging just means tapping on the space around the bread, which would make it bounce slightly in the opposite direction.

Nudging is also great to make yourself look like you’re humping an object — which incidently is an easy way to move obstacles out of the way.

Knock down as many obstacles as possible to your advantage

Yes, this may require you to “hump” objects around the room, but other than breaking stuff for fun, knocking things over may help clear your way or bridge your way over dirty surfaces that may contaminate you.

Also, it’s almost like a law in simulation games that you have to break as many things as possible to win, and not just in clearing the level.

Take breaks when you need them (change fingers)

I Am Bread was first released on PS4 and Steam, and allowed users to control each corner with a different button on the controller. On the iPhone and iPad, however, you don’t have that luxury, and gripping onto surfaces requires you to hold your finger to the screen as you move, which can be tiring and cumbersome when you run out of screen space. This makes it so that you will need both hands to play this game. If one finger is tired or has run out of screen space, then put your other finger onto the screen to substitute it.

The gameplay means that scaling walls will need all your attention (you will fall to your death the moment you let go of the screen), so take a break whenever you’re on a reliable, flat surface.

Set aside a lot of time for this game

It will be time-consuming, and you will need a lot of time to complete the game in one shot. Be ready to fail a lot, and don’t take the grading personally. If you try to get an A grade every time, then you can just forget about having friends. Unless you consider bread your friends.