Funan To Close For 3 Years: A Look At The Mall Through The Last 3 Decades 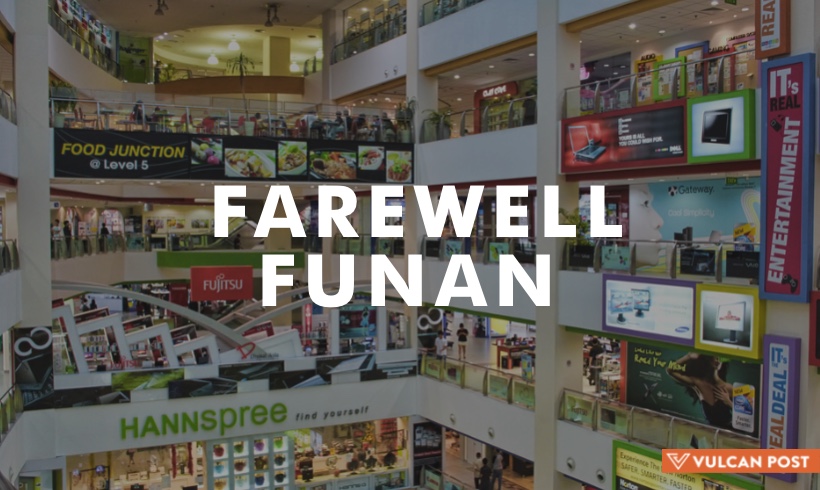 For the discerning tech enthusiast and computer geek, only two places come to mind when it comes to window shopping — or shopping — and browsing around looking for great deals: the infamous Sim Lim Square where many have been cheated and conned by cunning shop owners, and the dependable and very central Funan DigitaLife Mall. Which is why it is going to be quite sad to say goodbye to the mall when it closes for three years to be redeveloped into a creative hub, according to a press release by CapitaLand Mall Trust Management.

“The new building on the Funan site will be an aspirational lifestyle destination that will enthral shoppers and retailers. It will be an experiential creative hub within the city that engages communities to incubate new ideas and passions, and enables shoppers to enjoy retail in a technology-enabled environment. It will serve as a collaborative platform to connect retail, cultural, learning and business opportunities, and play a big part in the rejuvenation of the Civic District,” CEO of CapitaLand Mall Trust Management, Wilson Tan said.

We’re not sure whether the redevelopment will see Funan return as a tech hub, but before we part ways, let us reflect on the memories of how this mall has served us well:

Whether it’s the new game on the PS4, a laptop, or if you’re looking to be rigging up a PC on your own, a seasoned tech buyer would do their rounds first before narrowing down what to buy, which shop to buy it from, and most importantly how much money to part with. It’s not that easy, by the way, there’re things to consider: one might be cheaper but lacking in something, one might be slightly more expensive but you get an upgrade on something. It’s hard work all right. Which is why…

If you’re serious about scoring deals and saving money, you best read the pamphlets they distribute around the mall regarding discounts and sales. As always, make sure you read the fine print (if there’re any) or ask shopkeepers directly.

The longest tenant in Funan is everyone’s favourite local tech department store. These days, it’s full of Valore stuff, but back then, even a colourful mousepad would make me feel things, selecting an external hard drive was a great passion of mine, and buying a stack of blank CDs just so I could burn all my pseudo punk music on it made my secondary school year.

What’s in a name?

We’ll always call it Funan, but this good ol’ mall has been through quite a few name changes. The mall opened in 1985 as a general shopping centre called Funan Centre, but attracted a mass of electronic and IT retailers over the years. In 1992, the mall went through a renovation, adopting the name Funan The IT Mall in 1997. In 2005, it was renamed again to Funan DigitaLife Mall.

Who could forget the year when both the PS4 and Xbox One launched, and Funan had a grand and bizarre party complete with abseilers and dressed up characters that prompted gamers to go “that one from which game ah”?

Sure, these foyer sales weren’t as impressive as those of bigger malls like Plaza Singapura and the like, but they had pretty decent items for sale all the time. Sometimes it was books, sometimes laptop bags, and sometimes even heavily discounted sports gear where you could get a pair of Nikes for cheap.

Taco Bell, and then KFC

Back then, Taco Bell was one of those places you’d hear about on American television, books, and general pop culture so when it opened in Funan, of course I was going to try them quesadillas. I was disappointed of course, but for a while, I had a little piece of the American Dream. And then it got replaced by KFC, which was not bad too, I guess.

Not Just For Tech

Sometimes Funan played host to a bunch of non-tech events, like rock climbing competitions. They also played museum sometimes, when props from movies just somehow popped up at the tech mall. Like this:

The Japanese pop culture festival attracts hundreds of anime fans, and colourful cosplayers. The week-long event is not just a showcase; attendees can sign up for illustration classes, bento-making workshops, exchange tips and meet other cosplayers — there was always a nice community vibe to the event. Where will it be held now?

For many, Funan was more than just a ‘hang out’ mall, it was a place to go for people with purpose — to buy a new game, to have a quick lunch at the foodcourt, to get a gadget from Challenger or Harvey Norman, and more. We’ll miss you Funan!