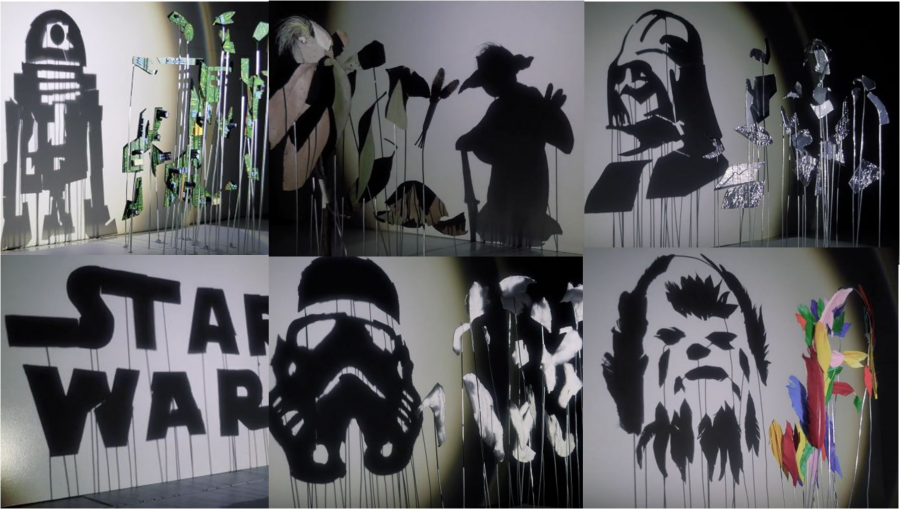 Star Wars fever has hit our nation big time and it will premiere today. Though I may not be a particular fan of the popular movie series, I know for sure that many will be watching the upcoming release of the 7th episode, STAR WARS: The Force Awakens. One Malaysian who definitely has an interest in the science fiction movie is none other than the talented artist who ‘paints without a paintbrush’ as stated on her Facebook page.

Red Hong Yi has been creating breathtaking pieces of artwork on her Instagram page and she is known for making art out of utilising materials which are unconventional when compared to other artists. Such unconventional materials include flower petals, coffee beans and even tea bags in order to piece her work together. This time she has used her talents to create a Star Wars shadow art series.

Her art pieces in a series of 7 installments, was done by casting one single light source onto objects made of different textures and materials. The art pieces show Red’s attention to details as she had layered the elements together in a certain way that when light shone on them, it miraculously formed the shadow of Star Wars characters. Here are the 7 characters she made come to life with shadow art.

Red sliced up her jeans and stuck some flowers onto them, then glued them on some wires to create the piece for Princess Leia.

Red utilised leaves and twigs to represent Yoda, the ‘most powerful Jedi Masters in galactic history’, as Red puts it.

Red strung a bunch of colourful feathers onto strips of wires and to create the furry shadow of Chewbacca.

Fluffy white clouds a.k.a. cotton balls aided Red in her creation of the shadow art for the Stormtrooper character.

Also known as the Second Generation Robotic Droid Series-2, Red indulged in her geeky side to create a piece of R2-D2 out of computer parts and GTX Titan graphic cards.

Darth Vader is one of the most recognisable characters in the entire Star Wars series and Red left the icon for last. She created the shadow art piece out of aluminium foil.

It is evident that Red bends creativity when it comes to creating art which is often times unbelievable but could in fact be created with everyday objects. She has stated on her website that she is ‘inspired by human diversity and the nuances of the human experience’. She hopes that her pieces will give her the chance to share and learn from different cultures and individuals.

It looks like with her Star Wars pieces, she is able to inspire people regardless of their culture and background, and whether they are Star Wars fans or not. This artist is definitely ready for the premiere of Star Wars episode 7.

Watch some behind-the-scenes footage below: