The Galaxy Tab S7 FE is a budget-friendly laptop alternative for students, here’s why 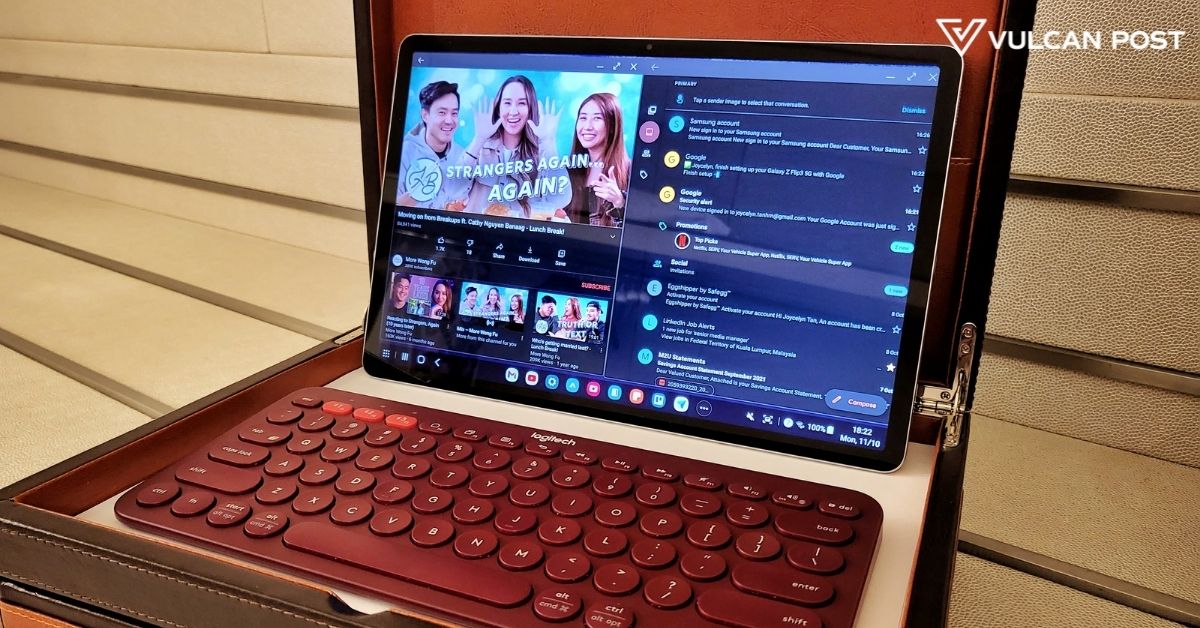 With online classes being the norm and continuing even as schools reopen, students requiring a device for their studies may see a tablet as a more affordable option than a laptop.

Attached to a Bluetooth keyboard or keyboard book cover, its screen can easily be converted into a functional laptop too. While you can’t expect it to sufficiently handle heavier programmes with ease like you would on a traditional laptop, it’s more than enough for students’ light work and play, from primary school up to even college.

Seeing that Samsung Galaxy Tab S7 FE is coming in at a starting price of RM1,848 for its 4GB RAM and 64GB ROM unit and RM2,199 for the 6GB RAM and 128GB ROM version, it’s a tad more affordable than some of the cheapest quality laptops on the market, if this list is anything to go by.

I won’t be going into the tablet’s full specs in this article, as they can be found in our previous, more detailed review of it.

Turning on Samsung DeX when paired with an external Bluetooth keyboard immediately switches the Tab S7 FE’s UI into one that looks like a laptop.

The tablet’s large 12.4-inch screen has plenty of real estate for multitasking abilities. 2 windows can be opened in a split-screen view, making it suitable for attending online classes while taking notes simultaneously.

It can also accommodate a couple more pop-up tabs to quickly reply to messages, check your emails, and set due dates in your calendar. For quicker access to frequently used apps, you can pin them onto the tab’s Edge panel too.

Although Samsung doesn’t provide a book cover keyboard when you purchase the Tab S7 FE, it does come with a stylus where writing with the S Pen on Samsung’s Notes app transforms your handwriting into text. However, it doesn’t always translate your scribbles accurately, so it’s not the best for taking notes in a hurry.

For those who find that doodling helps with focus, the tab also comes with the pre-installed PENUP app for digital art.

The S Pen is touch-sensitive, which means you can switch the intensity of your brushstroke depending on how hard you press down on the screen, and accidental touches were rare. Holding down the stylus’s side button also switches its function into an eraser for quick cleanups.

However, the stylus does have a high latency at 13 milliseconds (compared to the S7 Plus at 9 milliseconds), which may cause some lags before actions are reflected on screen. Hence, the device is likely more suitable for casual or beginner digital artists as opposed to professional ones requiring more accuracy.

For virtual meetings, there’s a 5MP front camera that sits atop the screen when the tab is in landscape mode. It’s a much-preferred location for the front camera when it comes to video calls, as you wouldn’t have to adjust or tilt the screen in awkward angles to get a good view of yourself.

Pick up from its built-in microphones also functions well and clearly.

The tab’s 8MP primary camera on the back isn’t the best, where images can come out looking overly saturated and with low sharpness. But let’s be real… who uses a tablet for high-quality photography?

Of course, a tablet is more than just a productivity device, and the Tab S7 FE makes for a decent entertainment one too when it’s time to wind down.

While it doesn’t have a fancy AMOLED screen like the Tab S7 Plus, its TFT screen has a high resolution of 1,600 by 2,560 pixels. With pronounced vibrant colours, the sacrifice isn’t immediately noticeable when watching videos.

Gaming on the Tab S7 FE is enjoyable as well, as the large screen can accommodate more visuals at a time, making a more immersive experience in open-world games. When playing Sky: Children of the Light on medium settings, it ran smoothly with minimal lags.

Though Samsung has cut down on the number of speakers on the Tab S7 FE from 4 to 2 compared to the Tab S7 and S7 Plus, audio is still loud and can easily fill a medium-sized room.

Unfortunately for those who still prefer wired earphones, the Tab S7 FE doesn’t come with a 3.5mm headphone jack, so you’ll have to opt for wireless earbuds instead.

Much like its premium counterparts, the Tab S7 FE has a 10,090mAh battery. It was able to get me through the more productive hours of my day, clocking in about 6 hours on full usage.

But charging it up again from 15% to 100% was rather slow and required at least 2 hours. While the tab is capable of 45W charging, it only comes with a charging block with an output of 15W.

That being said, the Tab S7 FE is still a convenient device to charge throughout the day even with a powerbank. Furthermore, because it uses the same charging cables for its USB-C port, you wouldn’t have to pack more cables than necessary in a compact school bag (unless your other devices are Apple products).

Weighing at around 608g, the Tab S7 FE is also portable, being lighter than a full-blown laptop.

Although the Galaxy Tab S7 FE would fit the ins and outs of a regular student, I’d say it’s not as suitable for the working class who’d need to multitask more heavily.

It wouldn’t be the best tablet for those who’ve been using devices with higher specs either, as Samsung has basically halved the specs from last year’s Tab S7 and S7 Plus.

To add, a Fan Edition device from Samsung usually means that it would carry all the essential features of more premium models with a budget-friendlier price tag, simply because all the bells and whistles have been stripped.

But truthfully, the lowered specs of the Tab S7 FE make it feel more like a “Lite” version, and that’s not good enough for a Fan Edition label.

As this is Samsung’s first go at a Fan Edition tablet, the brand would be expected to step up its game and execute what it’s previously done for its FE phones, which have received high praise from fans.

Nonetheless, for those who’d only require a productivity and entertainment device that does the bare minimum, it’s still a worthy tablet. You’ll still be getting a massive screen with great sound quality, good software, reliable battery life, and the S Pen experience on the Galaxy Tab S7 FE.

Also Read: A spotlight on 3M’s under-sink water filter, built from their 80+ years of expertise