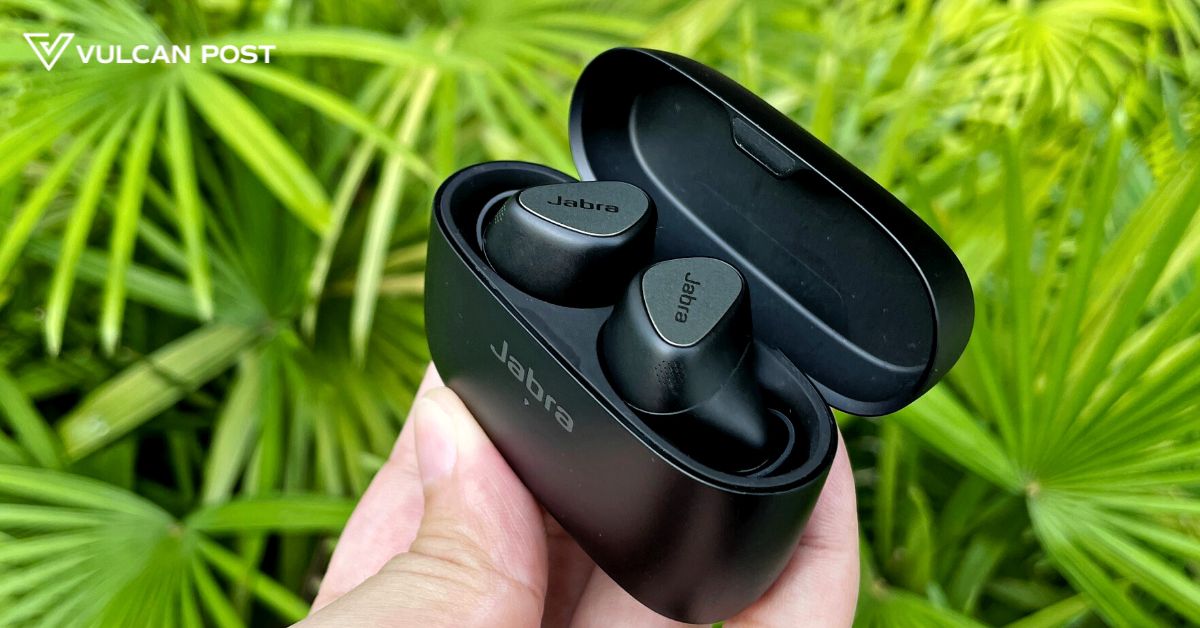 As someone who loves music ASMR, I’m surprisingly unenthused when it comes to earphones. To me, it all comes down to whatever gets the job done. No ANC, no problem. Just deliver the sound waves to my brainwaves, and we can call it a day.

But, well, that was the position I had before I got the privilege to try a variety of earphones and actually read into all the innovative technology that various earphones feature.

The most recent pair I’ve been trying is the Jabra Elite 5. It’s my first go at a pair of Jabra earphones, a brand that my colleagues have been raving about. “Loyal fans,” they call themselves.

I never understood, but now, I think I’m really starting to.

Everything I love about it

Made with a lightweight matte plastic material, the Jabra Elite 5 case is tall with a slender profile.

Within, a rubbery surface cradles the buds. This seems to give a sense of safety and protection whenever dropping the earbuds into place. I do wish that the lid of the case was also lined with a rubbery material too for a softer snap when closing it.

Trying the earbuds for the first time, I noted that they fit into my ear very nicely. This is likely thanks to what Jabra calls a “super-comfortable ergonomic design” that it developed based on its database of 62,000 ear scans.

The audio quality was so crisp and immersive that I legitimately thought the sounds were blasting from my phone. It feels like a 3D soundscape that has a lot of depth and texture, picking up on all the nuances of my favourite tracks.

After having a pretty annoying experience (at times) using the Samsung Buds 2 Pro, whereby accidental mishaps were basically happening every other minute, I absolutely love the Jabra’s large, tactile buttons.

Its multifunctionality is well-thought-out, though it took me a while to properly distinguish which functions were on the left versus the right.

Able to pair up to six Bluetooth devices at once, the multipoint Bluetooth feature of the earphones was also intuitive and useful.

Meanwhile, the six-mic call system sounds like a nifty feature to have if you’re someone who takes a lot of calls in noisy environments.

According to Jabra, the Jabra Elite 5 features internal mics that activate in windy environments. Our attempts proved that the buds were able to cut through windy sounds while still projecting the speaker’s voice clearly.

However, we found that it couldn’t isolate and cancel out normal office noises such as typing on mechanical keyboards and mouse-clicking. So if you’re aiming to take calls in the office, we recommend you still find a quiet spot to do so.

I love the ANC, but the Hear-Through…

The issue I have with ANC is that it often feels like there’s a very distinct pressure against my ears that I dislike.

If you struggle with this too, the science is that ANC buds generate low-frequency sound waves that can cause a whole bunch of psychosomatic issues.

But the Jabra Elite 5’s ANC is likely the most comfortable one I’ve tried thus far. To me, it also feels quite natural and not that overpowering.

With that said, that might be an issue for some who like a very strong ANC feature.

Just to give a measure, the ANC was able to block out rain sounds, but it wasn’t enough to overpower the noises that come with sitting on the LRT, particularly the screeching of tracks. I was able to pick up the steady hum of the treadmill belt in the gym as well.

Speaking of the gym, although it’s not as waterproof as, say, the Jabra Elite 4 Active, it has an IP55 rating, which means it’s protected from water spray from any direction.

The buds stayed on perfectly well during my jog despite all my sweatiness.

But something I didn’t really like about the buds was its Hear-Through function. Even when cranked all the way up, I felt like it wasn’t doing enough.

Plus, it was really hard to properly hear myself even with this function on, compared to previous earbuds I’ve tried. My own voice sounded frustratingly bass-boosted.

On the topic of iffy things, I also had a few instances when the buds weren’t properly synced with each other or one bud wasn’t playing. The fix was to just pop it back into the case and take it back out, which isn’t bad at all, but I wish it didn’t happen in the first place.

As mentioned, I’m an ASMR fan. This means that a comfortable fit is absolutely key as I occasionally wear the earbuds to sleep or while relaxing in bed.

So far, the Jabra Elite 5 has allowed me to do just that, with its comfortable fit and lightweight nature.

The battery life is rather standard, boasting up to 36 hours of music time with ANC off and the case fully charged, and 28 hours with ANC on.

It also features fast charging whereby 10 minutes in the charging case will give you an hour of use.

With all this said, a lot of the other Jabra Elite 5 articles you’ll find online might tell you how mediocre or unremarkable these pair of earbuds are. But I guess that’s just a testament to how far audio tech has come, and just how high the expectations are for Jabra.

With how often Jabra releases new products, it seems to be true that each model has incremental upgrades at best, so if you already own previous models such as the Jabra 85t, you might not find a huge difference in the Jabra Elite 5 to justify the upgrade.

By genuine audiophiles’ standards, this might not be the cream of the crop, but if you’re looking for a reliable pair of everyday earphones with truly refined audio, these are a good option. They retail for RM699.