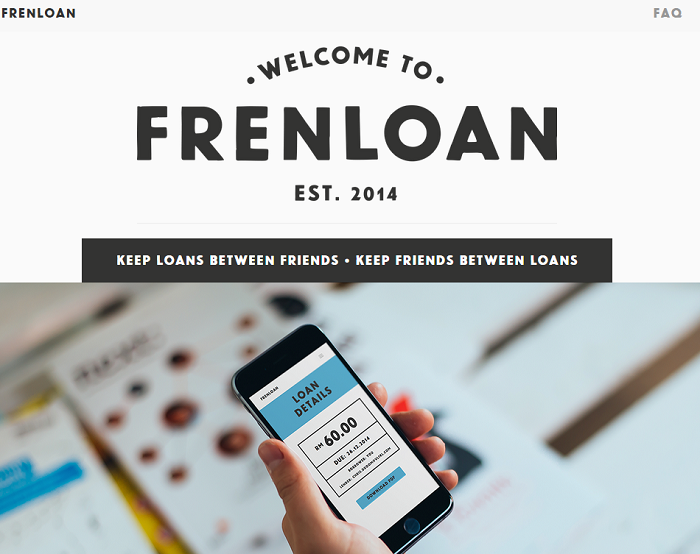 When it comes to borrowing or lending money to friends, a common and loudly resounding advice is this: “Don’t do it!”

The fastest way to lose a friend is to lend him money. Asking your friend to pay you back too soon makes you a cheapskate (and loanshark) and asking too late risks your friend forgetting about the loan entirely. There is also the possibility that your so-called-friend never intended to pay you back.

Either way, it won’t end well. There is even an idiom to summarize this occurrence, “Lend your money and lose your friend”.

Vulcan Post talked to David Sin, founder of DVG Web Sdn. Bhd. and the brains behind Frenloan, an app that will help you not lose your friend-in-need, even though the thing your friend needs is money. According to its FAQ section, Frenloan is a mobile app created to certify a loan to both lender and borrower.

Lend Your Money, Lose Your Friend?

“Growing up, I have asked and been asked to either lend or borrow small loans from buddies. Some helped, some didn’t. This social borrowing affects almost all of us,” David answered to the question of what prompted him to develop Frenloan.

“When the sum gets bigger we stop lending for the fear we won’t get our money back. Even today I keep hearing of stories of friends ending relationships because one party didn’t want to lend money. This sort of spark off an idea. If we can remove this barrier, people will be more willing to help out.”

David continued, “Right now, a handshake is all that is given by the borrower. In the event, he decides not to return the money, there is very little recourse to get the money back. Usually it’s the relationship that is the only guarantor to friendly loans.”

“So what if we could help generate a digital pdf that has all the details of the friendly loan for both parties to have? This would certainly help friends in real need of money get help from their friends. Friends would be less reluctant to lend since there will be some sort of written understanding between him and his friend.”

“For now, I’m working with VLT labs to experiment on this idea. On development, I’m outsourcing the development work to a close associate. Hopefully with traction, I can bring in more talents,” he shared. So far it seems that the Frenloan app has gotten a good start, being awarded a project scholarship through the ALPS programme, which is a collaboration between MaGIC and VLT labs.

There are only three people directly involved in Frenloan as of the time of this article. David has high expectations about the app, though he admitted that they are still trying to sort out any teething problems with it. “Right now, we’re starting with basic features like tracking, reminding and generating a digital PDF on the loan. Down the road, we’re hoping to have printable PDF copies.”

He hopes that the app can enable people with financial problems to get help from their close friends and family without getting themselves with serious debt issues and losing the loved ones in the process.

How You Get Your Money Back

The process of getting a loan is simple with the app. All you need to do is enter your phone number, your friend’s email and the amount you’d like to borrow. The pay-back-by date is also a must-enter in order to  ensure that you don’t go back on your word and pay your friend the money (or vice versa).

The request comes with a Loan Certification, using Frenloan to certify the loan so both parties will have a digital version with the borrower and lender, total amount due and date to be paid in full by. When the date arrives, the tracking feature will alert the borrower so that they honor their word and cough up the cash.

Frenloan is currently a free app. We would like to remind our readers that there is no way for Frenloan to help with disputes between parties since it’s a computer generated service. As is with everything that has to do with money, thread carefully.

Personally, I think this is a great idea for small cash amounts. In Malaysia it is a common scene for large groups to split the bill while dining together. This app could play a large role in keeping track of who owes who how much. However, when it comes to numbers with a few more zeroes at the back, it’s best to not go down that route.

English clotted cream is a niche product, yet this M’sian has dedicated 14 years to it