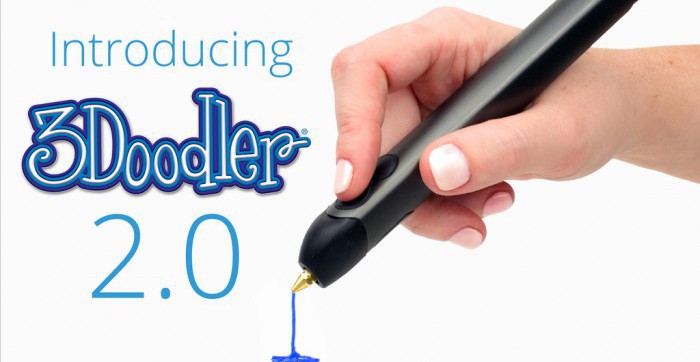 We gushed about the original 3Doodler in our 2014 Christmas Shopping list, and now, we’re super excited about its updated version (available on Kickstarter). Essentially a 3D printing pen, the 3Doodler can draw not only on flat surfaces, but also in mid-air. It works by extruding heated, malleable plastic, which then cools quickly and solidifies into whatever structure the user creates.

The new model is largely an improvement of the first, and what’s apparent at first glance is its much slimmer size. This puts the 3Doodler 2.0 at roughly the same size as a marker, making it easier for kids and even some grown-ups to control. It’s also significantly lighter, which probably means that we’ll be able to create more precise, detailed structures.

Fans of the original 3Doodler will also be glad to know that the 3Doodler 2.0 comes with a few extra accessories. They include a DoodleStand (to hold your 3Doodler and plastic ‘ink’), a Nozzle Set (with extra nozzles and a smoothing tool to ‘erase’ mistakes), a foot Pedal that controls the extrusion of heated plastic, and best of all, a JetPack.

The JetPack allows users to doodle even without a power socket, which makes the 3Doodler not only less cumbersome, but also portable. This is good news if you prefer to take your creativity outdoors, and we can see this being especially popular at children’s parties and the like.

Fun aside, we love that the creators of the 3Doodler are aiming to support education by bringing this tool to schools. And not just for regular math and art classes – some users have started using the 3Doodler to write Braille, so the Doodler could well be on its way to becoming a suitable learning aid for the visually impaired.

Smart, fun, and socially responsible – we can’t wait to get our hands on the 3Doodler 2.0. In the meantime, we’ll be right here thinking about all those 3Doodler-enhanced math classes that could have been.