This Kickstarter Raised $100,000 In Under An Hour; You’ll Never Believe What It’s About 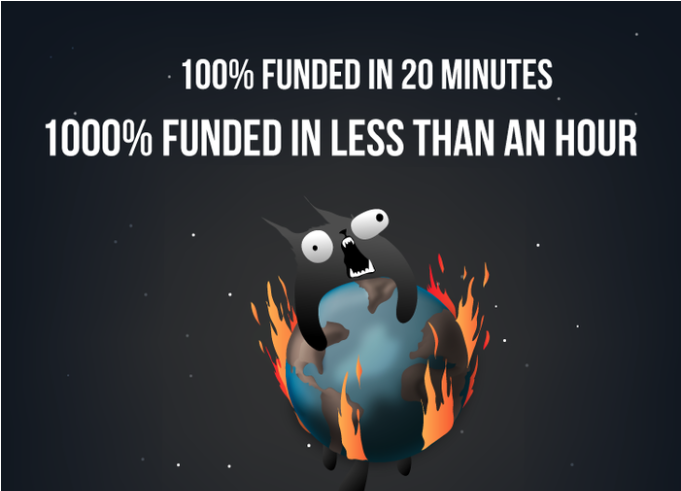 If you did a quick backtrack to make sure you didn’t read the numbers wrongly, I assure you — you didn’t. The project in question is called “Exploding Kittens”, and yes, they did reach their goal of $10,000 in 20 minutes. As of now, they’re way past the $2,000,000 mark, and with 28 days to go, don’t seem to be slowing down anytime soon.

What is Exploding Kittens?

You might be wondering what on earth this campaign is about. With a name like “Exploding Kittens”, after all, it hardly sounds like a lot of fun. But the concept itself is pretty intriguing, even if it is a simple one that targets adults and children aged 7+.

For starters, Exploding Kittens is actually a card game. The basic idea is that players take turns to draw cards from a pile, and then explode (and therefore lose) when they draw a kitten card. Along the way, extra cards allow players to defuse impending explosions, skip turns, and even rearrange cards in the deck.

It a bit like Uno, but with a slightly sadistic twist (backers contributing more than $35 receive an extra set of NSFW cards deemed “too horrifying and/or incredible to include in the kid-friendly version”). The whole exploding kittens situation might also be a bit too hard for some to handle, though I think the graphics more than make up for it.

The team behind this wildly successful campaign consists of Elan Lee (Xbox, ARGs), Matthew Inman (The Oatmeal), and Shane Small (Xbox, Marvel) – a pretty tough team to beat, if you ask me. If you need assurance that they’re not complete psychos out to kill kittens for fun, they do explain how they came up with the name on their Kickstarter page here.

So if you find cute, exploding animals and catnip sandwiches right up your alley, go ahead and back this campaign (not that they need it, though).