Why I Think The Complaints Against SIA Are Complete Rubbish 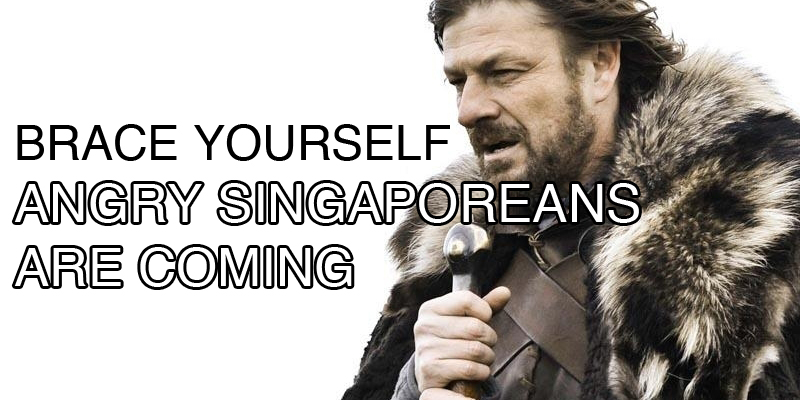 Call Singaporeans an ungrateful, unhappy bunch if you must, but when it comes to our very own national airline, you’d be hard pressed to find another group more protective (and vocal) than we are.

Last week, two separate incidents – both of which were complaints targeted at Singapore Airlines (SIA) – made their rounds online. Singapore netizens were unimpressed, and proceeded to make their dissatisfaction known.

I might be biased: SIA has been consistently voted one of the best airlines in the world, after all. And the complaints made against SIA were pretty unreasonable, too. So while I can sympathise with a bad in-flight experience (I’ve gotten some of those myself, though not with SIA), I must say that the complaints were unwarranted.

Mr. Varghese clearly does not understand how an airport works. The reason airplanes stick to a tight schedule is because there are hundreds of take-offs and landings each day (or one every 90 seconds), and with Changi Airport being one of the busiest in the world, a delay of 5 minutes would have held up more than 3 other planes.

Speaking of valid arguments, here’s an even more ridiculous one. After bombarding SIA’s Facebook page with his list of complaints, Mr. Varghese went on to pose a hypothetical question, asking if SIA would have waited had it been a medical emergency. (Because, you know, it’s such a trauma to have to wait for a next flight! #firstworldproblems)

Well… the thing is, I’m not sure it would be advisable for someone who just had a “medical emergency” to continue with his travel plans in the first place. Wouldn’t it have been safer (not to mention more logical) for him to make a trip to the hospital?

For someone who has travelled at least 5 times via plane, you would have thought he’d know better than to assume that he’d get whatever he wanted on board.

Planes have limited capacity (obviously), so why would the airline have prepared baby food if no one had indicated their need for it? Carrying extra weight only adds to fuel costs, so it only makes sense to cut out things like baby food where possible.

As some netizens pointed out, the fact that the cabin crew managed to put together a meal at the last minute was an achievement in itself, and if Mr. Tay found the food unsuitable, perhaps he should have made his requests known when booking his flight.

All things considered, it seems the two incidents were simply cases of passengers with serious senses of entitlement. They seem to be frequent travellers too, so it’s almost comical how little they know about the basics of flying etiquette and rules.

The fact that SIA responded to their (non-)complaints is enough to show why the airline remains one of the best in the world. And the (sometimes vulgarity-laced) response by Singaporeans coming to SIA’s defence is just the icing on the cake. So the next time you travel – for goodness’ sakes – please be on time, and if you ever feel the need to make lame complaints against SIA, remember: hell hath no fury like a national airline scorned.