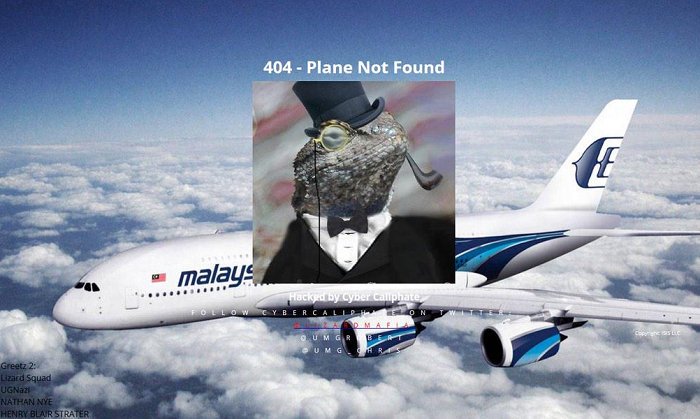 Malaysia Airlines was hacked this morning by a group of hackers calling themselves “Cyber Caliphate” or “Lizard Squad”.

“Caliphate”, according to global.britannica  refers to “the political-religious state comprising the Muslim community and the lands and peoples under its dominion in the centuries following the death (632 ce) of the Prophet Muhammad”.

This group seems to be in affiliation with Islamic militant group, ISIS, as the title bar initially showed the words, “ISIS will prevail.” However, this has been since been replaced by “Lizard Squad will prevail”.

The page is accompanied by the words, “404 – Plane Not Found” alongside the name of the hacker group responsible for the page, “Lizard Squad”. The names “UG Nazi”, “Nathan Nye”, and “Henry Blair Strater” are also listed.

Three Twitter accounts are listed, @Lizardmafia, @UmgRobert, and @Umg_Chris. Both of the latter accounts belong to the owner and executive board of US e-sports provider UMG Gaming and there appears to be nothing linking him to the attack on his twitter feed as of the time of this article.

This error will still appear periodically, however. MAS is not available for statement, though a number of it’s fans are (helpfully) commenting on the MAS Facebook page to let the admins know that their website have been hacked.

The Lizard Squad was responsible for wiping out Microsoft’s Xbox Live and Sony’s PlayStation Network last Christmas as well as other online gaming services in the past such as League of Legends, Call of Duty and Destiny using Distributed Denial of Service (DDoS) attacks.

After the successfully hacking into PSN, it took this to an entirely new level by tweeting that explosives were aboard an American Airlines Flight on which Sony Online Entertainment President John Smedley was on. The plane had to be diverted to Phoenix, though no explosives were found. This personal attack against the the President of Sony Entertainment was believed to be fueled by him publicly speaking out against the group.

The following statement has been released by the MAS Facebook Page:

Also Read
MAS Did An Amazing Campaign That No One Expected!
Categories: News Reader, Must Read, Malaysian